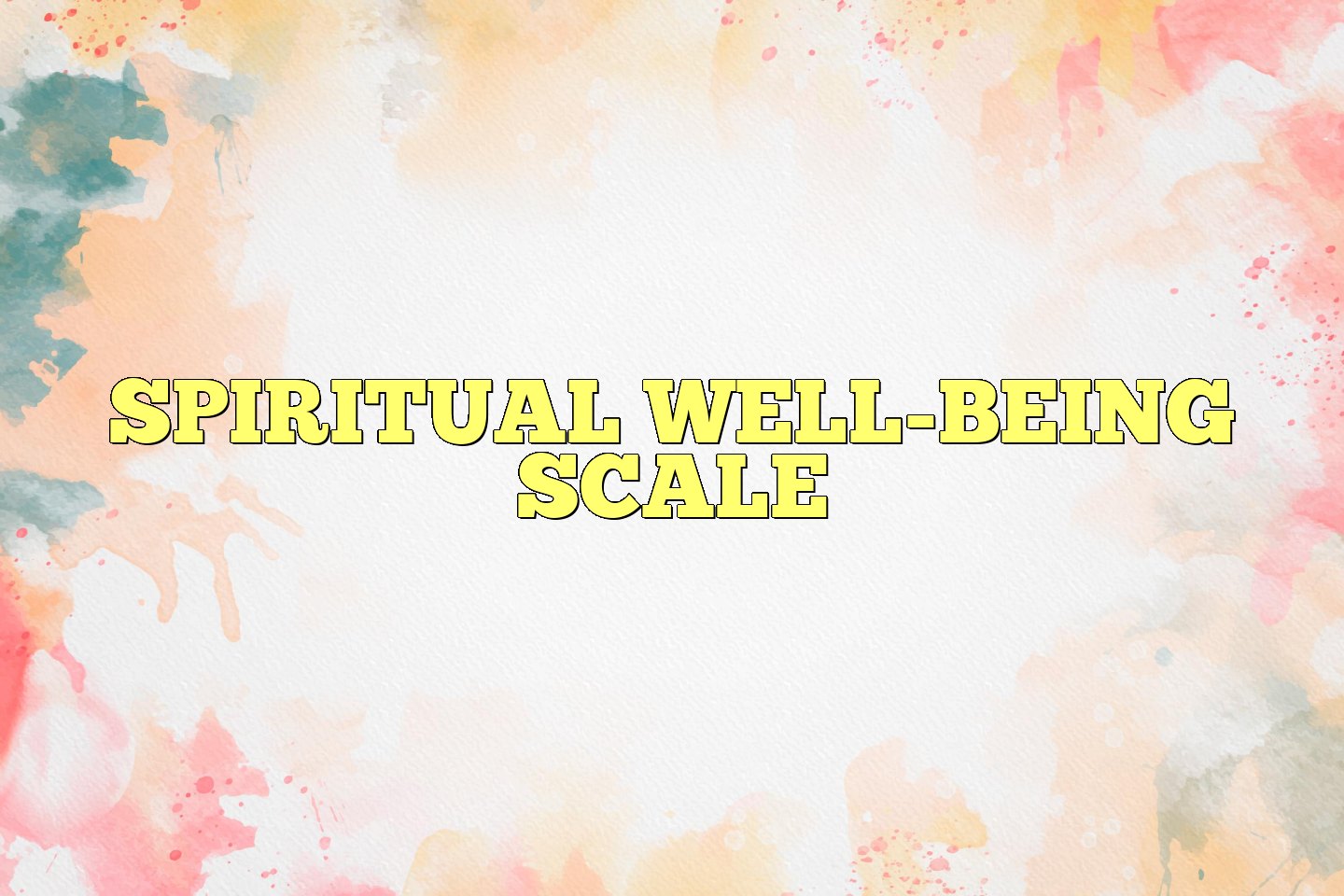 The Spiritual Well-Being (SWB) Scale was developed as a general measure of the subjective quality of life. It serves as a global psychological measure of one's perception of spiritual well-being. SWB is understood to be wholistic. The scale is in­ tended to measure people's overall SWB as it is perceived by them in both a religious well-being (RWB) sense and an existential well-being (EWB) sense.

Two points are highlighted in the concep­tualization of SWB. First, it is not the same as spiritual health or spiritual maturity, since these might be prescribed by different religions or denominations. Second, SWB in­ volves transcendence by focusing on well­ being in relation to that which lies beyond oneself, understood in two senses: religious and existential. Thus, the SWB scale is in­ tended to measure psychological dimen­sions, not theological ones.

By design, the construction of the SWB scale includes both a religious and  a social psychological dimension. The reli­gious, "vertical" dimension (RWBJ focuses on how one perceives the well-being of his or her spiritual life as this is expressed in re­lation to God. The social psychological, "horizontal" dimension (EWBJ concerns how well the person is adjusted to self, community, and surroundings. This compo­nent involves the existential notions of life purpose, life satisfaction, and positive or negative life experiences.

Based on these concepts, the SWB scale is a 20-item self-assessment instrument con­ structed of two subscales, one that repre­sents the vertical RWB dimension and one that represents the horizontal EWB dimension. Each subscale contains 10 items. All of the RWB items contain the word "God."

The EWB items contain no specifically religious language, instead asking about such things as life purpose, satisfaction, and rela­tions with the people and situations around us. In order to control for response set bias, approximately half of the items are worded in a reverse direction so that disagreement with the item represents higher well-being.

The scale is easily understood, requires 10-15 minutes to com­plete, and has clear scoring guidelines. It is nonsectarian and can be used in a variety of religious, health, and research contexts.

Some normative data have been pub­lished that permit interpretation of scores in comparison to some identified populations (Bufford, Paloutzian, & Ellison, 199 l; Paloutzian & Ellison, 1991). Means and standard deviations for RWB, EWB, and SWB are typically reported separately. Although RWB and EWB are moderately cor­ related with each other (r = .32), scores for the two subscales can behave differently. Mean scores for several different religious (mostly Christian) groups ranged from 34 to 56 for RWB, 46 to 53 for EWB, and 82 to 109 for total SWB. Similarly, for various other groups the mean scores for RWB, EWB, and SWB, respectively were: 51, 48, and 99 for medical outpatients; 35, 40, and 76 for nonreligious sociopathic convicts; and 44, 38, and 83 for combined sexually abused, eating disorder, and outpatient counselees.

The SWB Scale appears to mea­ sure what is intended. Face validity is evi­dent by examination of the content of the items. Also, the authors report a factor analysis of the items, whose results yield factors that correspond to the two subscales. The RWB items cluster strongly together on one factor. The EWB items tend to cluster together on two subfactors that connote life direction and satisfaction. These results are generally consistent with the conceptual structure guiding the development of the scale. Some subsequent research may sug­gest a more complex factor structure (Led­ better et al., 1991).

Validity is also indicated by correlations between the SWB scale and other measures with which it ought to be associated on the­ oretical grounds. For example, people who tended to score high on SWB scored lower on loneliness, higher on self-confidence, and higher on intrinsic religious orientation. The SWB, RWB, and EWB scores were all positively correlated with a sense of pur­pose in life (Paloutzian & Ellison, 1982).

Subsequent research shows that RWB, EWB, and SWB are associated with a vari­ety of psychological, religious, health, and relational variables (Ellison & Smith, 1991). The authors report that a ceiling effect can occur in RWB and SWB scores in some religious samples, making it harder to dis­tinguish among subjects high in well-being in those groups. On the other hand, the scale is particularly sensitive at the low end. It may be a useful tool to point our attention to those experiencing spiritual distress or lack of well-being, and may assist as an instru­ment to assess global indications of distress in personal functions.

For each of the following statements, circle the choice that best indicates the extent of your agreement or disagreement as it describes your personal experience:

Note: This is one of the most widely used scales for research and clinical purposes. In their 1991 manual, the authors report they have received over 300 requests to use the scale.