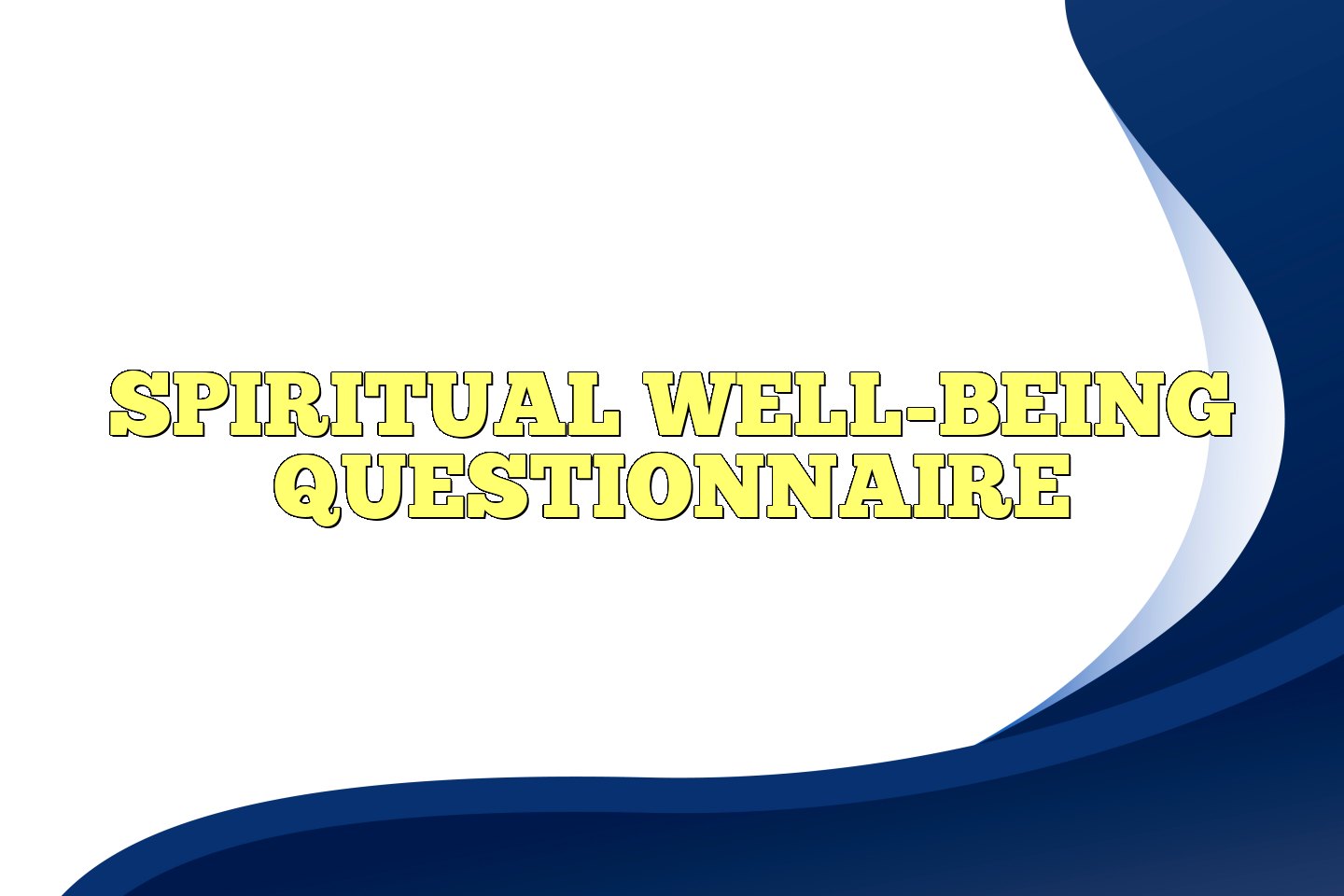 The Spiritual Well-Being Ques­tionnaire (SWB) is a multidimensional as­sessment tool useful for evaluating religios­ity in terms of spiritual growth and maturity from a wholistic perspective. The concep­tual basis of the SWB consists of one's rela­tionship with God, self, community, and en­vironment.

The instrument is comprehen­sive because it includes individual items pertaining to social attitudes, self-percep­tions, theological orientation, religious be­liefs, opinions, experiences, preferences, af­ filiations, and various charitable endeavors. In developing this instrument, Moberg at­ tempted to address the following require­ments for a useful measure of spiritual well­ being. These consist of:

Initially, Moberg instituted a survey study to gather data used for constructing the SWB Questionnaire. From the data gathered, an 82-item instrument was con­ structed consisting of 6-point Likert scale statements, matrix questions, multiple choice questions, and self-identifying infor­mation through four major parts of the questionnaire. Through personal correspondence, the author states that all four parts of the questionnaire are "indicators, reflectors, or aspects of 'spiritual well-being' but not necessarily 'measures' of it (Moberg, per­sonal communication, January 5, 1995). Items pertain to social attitudes, self-per­ceptions, theological orientation, and activities serving others in charitable, political, and religious contexts. Also included are religious beliefs, Christian doctrine, opin­ions, experiences, preferences, and affilia­tions. Scoring is somewhat complex and is explained in this voluneat the end of the instrument.

The four strongest indexes or spiritual well­ being are the Christian Faith Index, the Self­ Satisfaction Index, the Personal Piety Index, and the Subjective Spiritual Well-Being Index. One measure of spiritual well-being could, therefore, just include the items involved in these indices. The indexes of Op­timism, Religious Cynicism, and Elitism are the weakest statistically and the author, through personal correspondence, recom­mends that these items be dropped.

The directions for administering, scoring, and interpreting this instrument are specifically addressed in Moberg's (1984) article. This questionnaire can easily be administered to respondents in a private or group setting (i.e., classes, clubs, senior citizen forums, or church-re­lated gatherings).

The instrument is comprehensive and re­ quires approximately 30 to 60 minutes to complete. Because of its length, it may not be useful for subjects who tire easily or grow impatient with a lengthy question­naire.

The original sam­ple consisted of 76 l respondents in 17 group settings in three regions of the United States, and 320 respondents in 15 groups from all major regions of Sweden. It was se­lected in such a manner as to insure a di­ verse representation. However, means and standard deviations were not reported for these data.

No measures of reliability were reported in Moberg (1984).

TD = I tend to disagree.

If your life now is very closely related to one of the words, check the space next to it under the l or 7.

If your life is quite closely related, check the space under 2 or 6.

If your life is only slightly related, check the space under 3 or 5.

If your life seems either unrelated or equally related to both words, check the middle space under the 4.

It is important to check only one space on each line.

the best in me

Brings out the worst in me

Items 18-28 Codes are sequentially number in order of the response categories.

Note: A further resource of more recent research using Moberg's scale as well as other assessments of spiritual. well-being in the health care setting, can be found in the

Proceedings of the Spiritual Well-Being Conference

Program for Continuing Education in Nursing