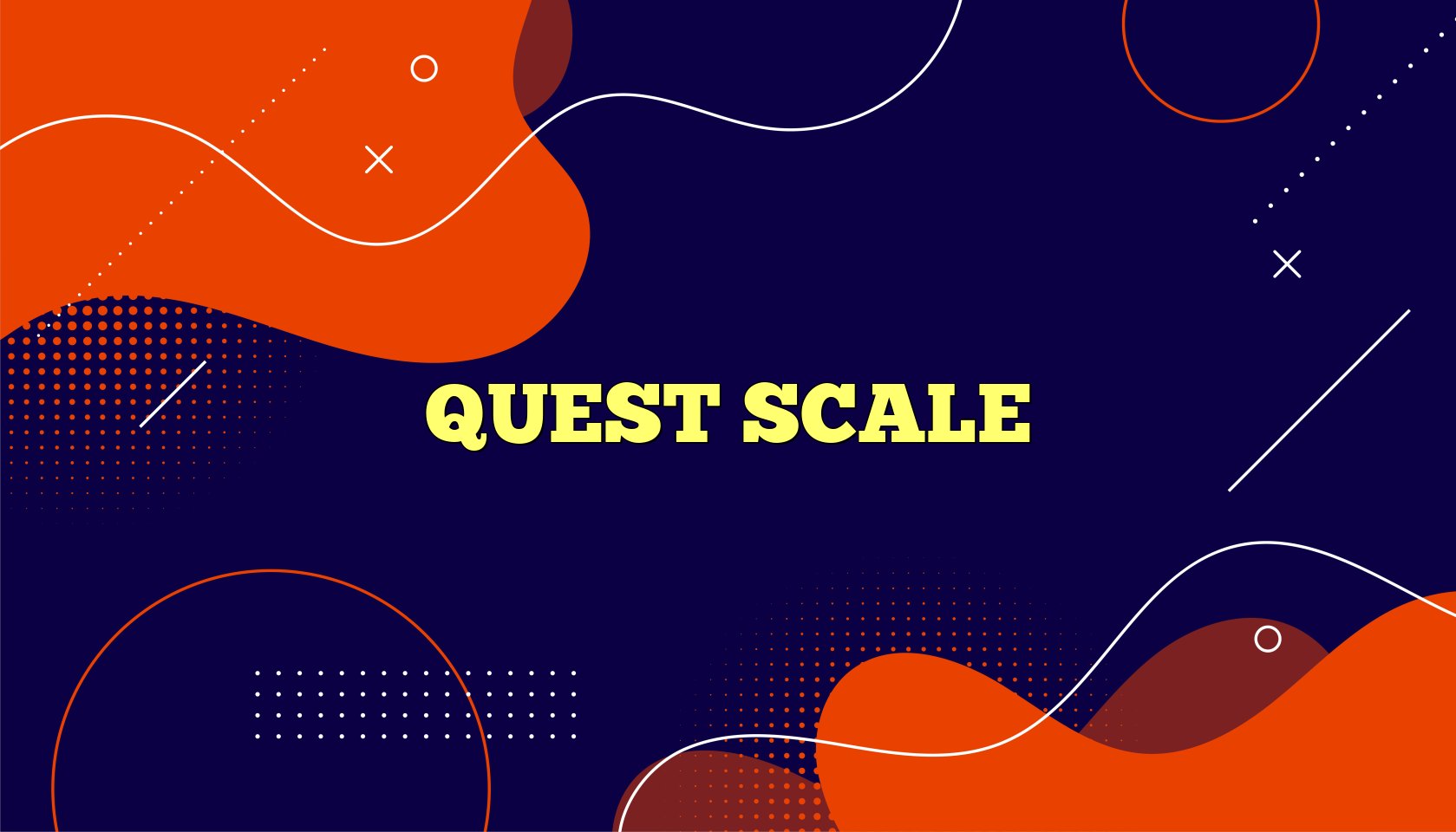 Although the conceptualization of quest has remained virtually unchanged over the course of Batson's writings related to it, numerous "Quest Scales" have ap­peared since the construct was initially pro­ posed. A nine-item version used by Batson in the early seventies gave way to the six-item "Interactional" Scale (Batson, 1976), the ver­sion with which most of the substantive re­ search related to the quest orientation has been conducted (see Batson & Ventis, 1982; Batson et al., 1993, for reviews). Prompted largely by criticisms regarding the low inter­nal consistency associated with the 6-item / scale, however, Batson and Schoenrade J (1991b) constructed a 12-item Quest Scale. Reliability and other psychometric concerns also sparked three other independent scale revision/construction attempts: Altemeyer and Hunsberger (1992); Kojetin, McIntosh, Bridges, & Spilka (1987); and McFarland (1989). Only Batson and Schoenrade (1991b) will be discussed here, however.

The 12-item Quest Scale is intended to assess three distinct but interrelated aspects of the quest orientation: (a) "readiness to face existential questions without reducing their complexity," (b) "self-criticism and perceptions of religious doubts as positive," and (c) "openness to change" (Batson & Schoenrade, 1991b, p. 431). Each aspect is primarily assessed by four different items, although Batson and Schoenrade express reservations with respect to using these item clusters as subscales. Batson and colleagues typically employ a nine-point (1 = strongly disagree to 9 = strongly agree) response for­ mat; scores are reported as overall item means (range = 1-9) rather than as item to­ tals (see "Norms/Standardization").

In addition to Quest Scale scores, Quest component scores-along with Means and End component scores-are computed based on a principal-components analysis justified by Batson 's (1976) three-dimen­sional model of religious orientation (see "Practical Considerations"; see also Reli­gious Orientation Scale, in this volume). Because the Quest component is defined al­ most exclusively by the Quest Scale (Batson & Schoenrade, 1991b, reported loadings of and .97 in their two samples), however, the two are virtually interchangeable.

Other than a ref­erence to deity in one item, the Quest) Scale's assumptions and wording are quite nonsectarian, suggesting the scale's useful­ ness across a broad range of samples. The existential content and sense of time per­spective present in many items may limit the scale's comprehensibility to older ado­lescents and beyond, although this reviewer is unaware of any data establishing a "lower

limit" age range for the scale's use. Scoring of the scale itself is quite straightforward; deriving Quest component scores a la Bat­son's three-dimensional model requires some degree of statistical sophistication, however (see Batson, 1976, and Batson et al., 1993, for overviews of this procedure).

In their initial pre­ sentation of the 12-item Quest Scale, Batson and Schoenrade (1991b) reported means of 5.04 and 4.95 for two groups (approxi­mately 200 each) of Christian-background undergraduates at the University of Kansas who were at least moderately interested in religion. Burris, Jackson, Tarpley, and Smith (1996) demonstrated that Quest scores vary considerably as a function of self-identified religious preference (see "Validity"). There is also some evidence that quest is inversely related to age (from adolescence beyond), but the data are by no means unequivocal (see Batson & Schoenrade, 1991a). More­ over, all age-related data reported thus far are cross-sectional, not longitudinal, which cannot rule out possible cohort effects on the age-quest relationship.

As noted above, Batson and Schoenrade (l 991b) developed the 12-item Quest Scale in part as a response to criticisms regarding the 6-item Interactional Scale's low reliability, i.e., with the "true" Cron­ bach's alpha hovering "around .45 or .50" (p. 432) based on their review of several studies. The reliability of the 12-item Quest Scale, while not outstanding, is nevertheless much more adequate: Batson and Schoenrade re­ ported Cronbach's alphas of .75 and .81 in their two samples, approximating the .71 to range reported by Burris et al. (l 996) across their four samples. Burris and Tarpley (in press) recently reported a two-week test­ retest reliability of .79 for the 12-item scale in a sample of 61 undergraduates, again fa­vorably comparing to the .63 for the 6-item scale in an unpublished manuscript cited by Batson and Schoenrade.

Assuming the relative interchange­ ability of the 6-item Interactional and the 12-item Quest scales (which seems justified given correlations ;;:: .85, Batson & Schoen­rade, 1991b), support for the validity of the latter scale is fairly substantial. For exam­ple, Batson has demonstrated repeatedly that the Quest Scale measures something distinct from what the Extrinsic or the In­trinsic scales measure (see Allport & Ross, 1967; see also this volume)-although whether the quest orientation should be regarded as independent with respect to either of these orientations is open to debate (see Burris, 1994). Moreover, Burris et al. (1996) demonstrated quest to be an articulation of religion not reducible to agnosticism (Donahue, 1985), liberalism (Paloutzian, 1983; Wulff, 1997), or simple anti-orthodox sentiment (Watson, Morris, & Hood, 1989). In two university samples, Burris et al. (l 996) found that individuals who declared their religious preference to be "personal re­ligion" averaged higher on the Quest Scale than did either agnostics, liberal Protestants, or atheists. Indeed, consistent with Batson and colleagues' (1993, p. 167) suggestion that the quest-oriented individual is commit- ted to "hammering out his or her stance religious questions, refusing to be dominated by the religious institutions of society," Burris et al. found quest to be related to a number of variables suggestive of an individuated stance toward social participation in general (e.g., reactance, social criticism, need for uniqueness).

Please indicate the extent to which you agree or disagree with each of the items by using the following scale:

1. I was not very interested in religion until I began to ask questions about the meaning and purpose of my life.
2. I have been driven to ask religious questions out of a growing awareness of the tensions in my world and in my relation to my world.
3. My life experiences have led me to rethink my religious convictions.
4. God wasn't very important for me until I began to ask questions about the meaning of my own life.
Self-criticism and perception of religious doubt as positive
5. It might be said that I value my religious doubts and uncertainties.
6. For me‚ doubting is an important part of what it means to be religious.
7. I find religious doubts upsetting.
8. Questions are far more central to my religious experience than are answers.
Openness to change
9. As I grow and change‚ I expect my religion also to grow and change.
10. I am constantly questioning my religious beliefs.
11. I do not expect my religious convictions to change in the next few years.
12. There are many religious issues on which my views are still changing.
This instrument can be found on page 11 of Self Report Measures for Love and Compassion Research: Spiritual Experience & Religiosity‚ Fetzer Institute‚ available online http://www.fetzer.org/sites/default/files/images/resources/attachment/2012-10-19/MultidimensionalBooklet.pdf
Point values are assigned as follows:
1 = Strongly Disagree………………9 = Strongly Agree
Items 7 and 11 are reverse scored. Scoring can be at the subscale level or as a whole. Scoring is kept continuous.

Altemeyer, B. & Hunsberger, B. (1992). Author­ itarianism, religious fundamentalism, quest, and prejudice. International Journal for the Scientific Study of Religion, 2, I 13-133.

Burris, C. T. (1994). Curvilinearity and religious types: A second look at intrinsic, extrinsic, and quest relations. International Journal for the Psy­chology of Religion, 4, 245-260.

McFarland, S. G. (1989). Religious orientation and the targets of discrimination. Journal for the Scientific Study of Religion, 28, 324-336.