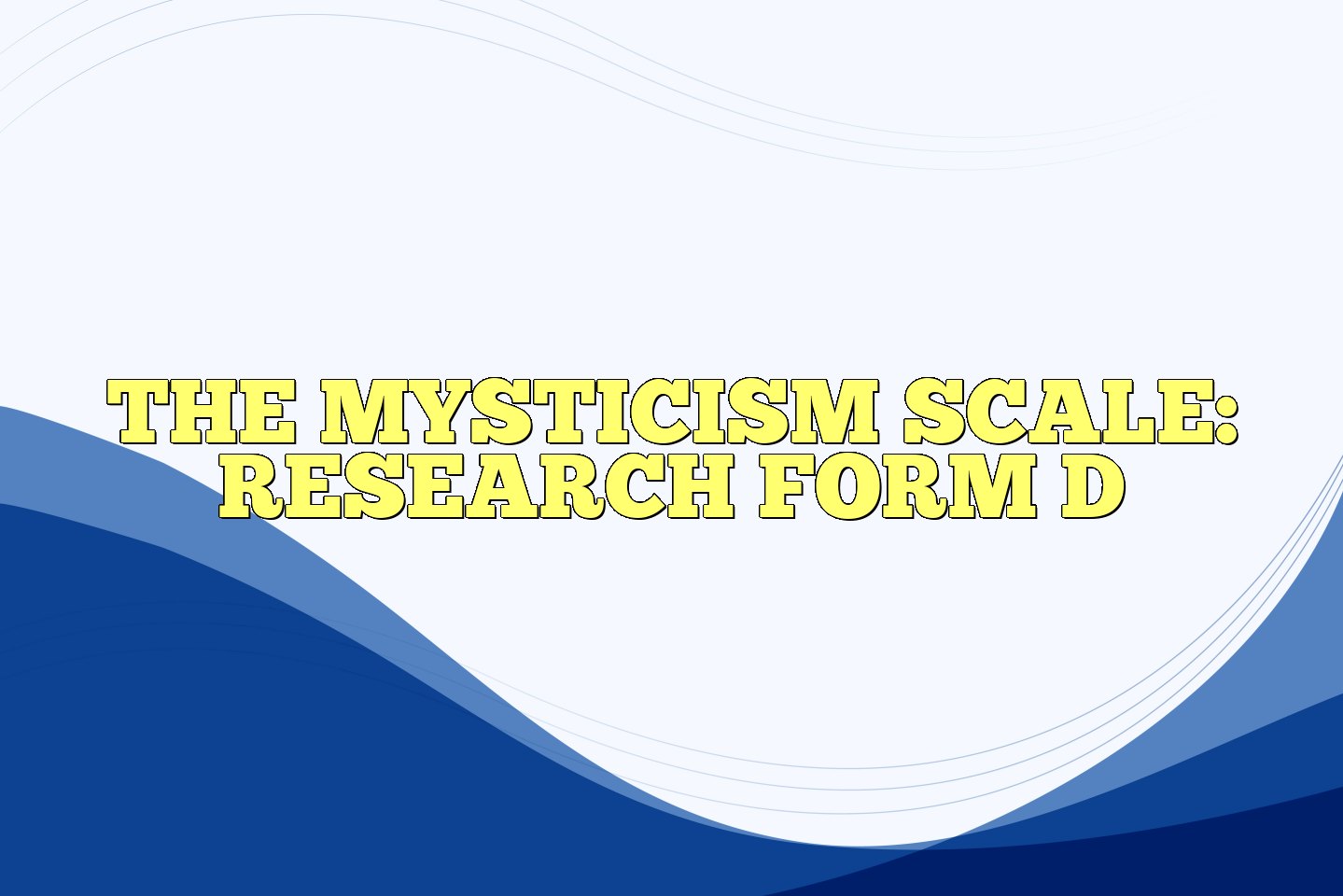 THE MYSTICISM SCALE is a self-report in­strument intended to assess an individual's intense experiences, characterized by a sense of unity with the outside world and/or with "nothingness," which may or may not be religiously interpreted.

A-2 (definitely not true) to +2 (probably true) Likert-type response format is used. There is no midpoint per se, although re­spondents are instructed to write a question mark (equivalent to 0) when they cannot de­cide on an answer. Scoring is accomplished by first reverse scoring all negatively worded items, adding three to each item's value (including "?s"), and finally summing item scores. M scale scores can thus range from a low of 32 to a high of 160.

The M scale's basis in Stace's (1960) eight mysticism criteria notwithstanding, Hood and other researchers have made little use of the eight subscales, instead analyzing reported mystical experience at a more molar level. Specifically, the M subscales of choice have until recently been based on the two-component structure reported by Hood (l 975)-the first component corresponding to intense experience of unity, the second to affectively charged, religiously interpreted insight. At least two notable alternative structures have been proposed, however. Caird (1988; N = 115) suggested a three­ factor solution, retaining the general or unity factor and splitting the interpretation factor into religious- and knowledge-based subscales. Hood, Morris, and Watson (l 993) reported a different three-factor solution based on a much larger sample (N = 740)­ the first component corresponding to "ex­trovertive" mysticism (experienced unity

with the external world), the second to reli­gious interpretation, and the third to "introvertive" mysticism (experienced unity with "nothingness"). Hood, Spilka, Hunsberger, and Gorsuch (l 996) have recently recom­mended that subscales based on this three­ factor solution be used in subsequent re­ search in order to tap the potentially important conceptual distinction between introvertive and extrovertive unitive experience. For a more detailed presentation of conceptual issues and research relating to the M scale, see Hood et al. (1996).

Administration is typically paper-and-pencil, although oral administration using a yes/no response for­ mat has also been done (Hood, Morris, & Watson, 1990). Instructions to the respon­dent are clear and straightforward, as is scoring. The M scale in general appears nonsectarian and nonsexist in wording and content, and can therefore be administered without modification across a broad range of samples.

Hood's (1975) ini­tial validation sample consisted of 300 pre­ dominantly Protestant undergraduates. M scale means were 109.3 for males and I19.4 for females; no significance test was re­ ported for the apparent sex difference (see also Smurthwaite & McDonald, 1987; Swartz & Seginer, 1981). Hood also re­ ported M scale means for an additional four samples: two groups of undergraduates, sizes 65 and 52, at a fundamentalist Christ­ian college in the southern United States (Ms = 132.2 and 114.9, respectively), and two groups, sizes 83 and 29, at the Univer­sity of Tennessee at Chattanooga (Ms = 110.2 and 104.9, respectively). As Hood noted, the anomalously high mean of the first Christian college sample may have been attributable, at least in part, to a situational demand for responses attesting to one's personal religiosity.

Hood et al. (1993) reported reasonable relia­bilities for subscales based on their 3-factor solution as well: Alpha coefficients were .76, .69, and .76 for the Extrovertive, Introvertive, and Religious Interpretation Scales, respectively.

The validity of the M scale is rather well documented. Supportive of its convergent validity, the M scale has been found to be related to measures of openness to experience, religious experience broadly construed, and traditional religious motiva­tion (Hood, 1975). It is also related to ab­ sorption and hypnotizability, but unrelated to social desirability (Spanos & Moretti, 1988). Supportive of its discriminant valid­ity, relationships between the M scale and various indices of psychopathology have been generally unremarkable. Caird (1987), for example, found no relationship between M scale scores and either neuroticism or psychoticism as measured by the Eysenck Personality Questionnaire, for example. Moreover, although Stifler, Greer, Sneck, and Dovenmuehle (1993) found that reli­giously delusional psychotic individuals and members of contemplative groups reported similar levels of mystical experience as compared to "normals" (i.e., a group of hos­pital employees), contemplatives were more similar to the "normal" versus the psychotic group in terms of reported (relatively low) levels of psychopathology. Indeed, Hood, Hall, Watson, and Biderman (1979) found self-reported mysticism to be related to a number of positive personality characteris­tics such as creativity and tolerance (see also Cowling, 1985; Hood, 1975; Spanos & Moretti, 1988).

Instructions: The attached booklet contains brief descriptions of a number of experiences. Some descriptions refer to phenomena that you may not have experienced. In each case note the description carefully and then place a mark in the left margin according to how much the description applies to your own experience. Write +1, +2, or -1, -2, or? depending on how you feel in each case.

Please mark each item trying to avoid if at all possible marking any item with a ?. In responding to each item, please understand that the items may be considered as applying to one experience or as applying to several different experiences. After completing the booklet, please be sure that all items have been marked-leave no items unanswered.

Hood, R. W., Jr. (l 975). The construction and preliminary validation of a measure of reported mystical experience. Journal for the Scientific Study of Religion, 14, 29-41.

Propst, L. R. (1979). Effects of personality and loss of anonymity on aggression: A reevaluation of deindividuation. Journal of Personality, 47, 531-545.

Hood, R. W., Jr. (1975). The construction and preliminary validation of a measure of reported mystical experience. Journal for the Scientific Study of Religion, 14, 29-41.

Spanos, N. P., & Moretti, P. (1988). Correlates of mystical and diabolical experiences in a sample of female university students. Journal for the Sci­ entific Study of Religion, 27, I 05-116.