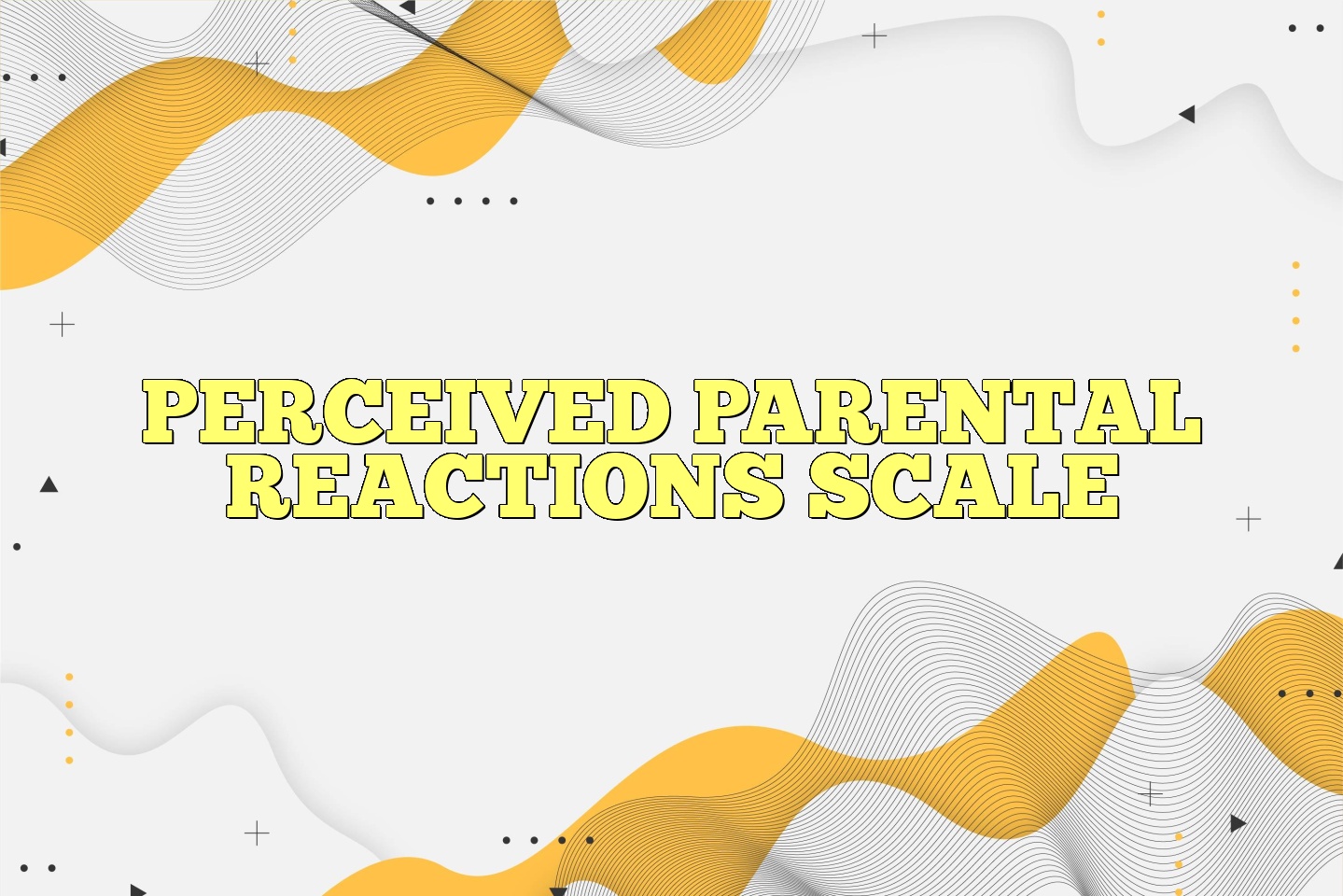 The PPRS is a 32-item scale wherein self-identified LGB individuals are asked to rate their mother’s or father’s initial reactions to their coming out. Maternal and paternal reactions are rated on separate versions of the scale, which are identical except for references to parent gender. Individuals are required to think back to the week their mother or father found out about their sexual orientation and indicate agreement or disagreement with several possible reactions (e.g., cried tears of sadness) using a 5-point Likert scale. The PPRS was developed on the basis of Weinberg’s (1972) love versus conventionality theory and Savin-Williams’ (2001) initial reactions model.

The scale was initially developed to assess nine theoretical dimensions of parents’ initial reactions to coming out, including negative shock, denial, anger, bargaining, depression, acceptance, general homophobia, parent-focused concerns, and child-focused concerns. Four items assess each dimension. Items assessing the child-focused dimension were later removed based on the results of the initial scale development study. Child-focused items were writ- ten to address parental responses of concern for their child (e.g., “My mother was worried about my chances of finding a relationship partner”), which were initially conceptualized as positive reactions from parents. However, these items did not correlate with the PPRS total as expected and lowered overall reliability estimates (i.e., alpha) in both the mother and the father versions of the scale. The result, therefore, was a 32-item scale assessing eight theoretical dimensions of perceived parental reactions.

During administration, individuals are provided with copies of the mother and father versions of the PPRS, asked to read the instructions carefully, and asked to respond to each item by circling a number on a Likert scale. Respondents should complete the PPRS only if (a) they have directly dis- closed their sexual orientation to a parent or (b) they have had direct discussion with a parent about their sexuality following the parent’s discovery of their sexual orientation through other means (e.g., parent discovered gay material on the Internet, read a diary, or was told by someone else). It takes approximately 15 minutes to complete both the mother and the father versions of the PPRS.

The reliability of the PPRS has been examined in two independent empirical investigations. In the initial development study (Willoughby, Malik, & Lindahl, 2006), the PPRS was administered to 72 gay men (ages 18 to 26) recruited from LGB community- and university-based organizations. Participants were ethnically diverse (39% Hispanic, 39% White-Anglo European, 10% Caribbean/ African American, 12% Mixed/Other). The majority of participants had completed some college or a bachelor’s degree (83%), whereas others reported high school (15%) or elementary school (1%) as their highest level of education. Of the 72 respondents, 70 were out to their mothers and 45 were out to their fathers. Means and standard deviations for the PPRS total score were as follows: mother version M = 90.16, SD = 35.21; father version M = 86.87, SD = 31.73. In this study, all items on both the mother and the father versions of the PPRS showed item-total correlations of .40 or above and demonstrated good internal consistencies (mother version [n = 70], α = .97; father version [n = 45], α = .97). Using a subset of participants, both versions of the PPRS showed good test-retest reliability after a 14-day interval (mother version [n = 19], r = .97; father version [n = 12], r = .95).

The mother version of the PPRS was administered as part of a larger protocol examining the family and peer relationships of LGB young people. Participants included 81 young men (69%) and women (31%), who identified as gay, lesbian, bisexual, or queer. Ages ranged from 14 to 25 (M = 19.70, SD = 1.76), and the sample included young people from diverse ethnic backgrounds (54% White-Anglo European, 20% Hispanic/Latino, 14% African/Caribbean American, 6% Asian, and 6% Mixed/Other). Participants were recruited from LGB social and college groups, as well as via study advertisements and friend referrals. Of the 81 young people, 65 were out to their mother. In this sample, the mean of the PPRS total score was 89.64 (SD = 34.37). Similar to the development study, all items showed item- total correlations of .39 and above. Internal consistency was also adequate (n = 65), α = .97.

Initial evidence supports the construct validity of the PPRS. First, as reported by Willoughby et al. (2006), gay men reporting to have grown up in families with low cohesion (i.e., family togetherness) and low adaptability (i.e., family flexibility) reported greater negativity from parents at coming out. Further, gay men who reported coming from families with authoritarian parents endorsed greater negativity from parents at coming out, compared with men who reported having authoritative or indul- gent parents. Regarding convergent validity, the PPRS is related to hypothetically similar constructs. For instance, the mother version of the PPRS was highly correlated (r= .55, p < .001) with the Family Reactions subscale of the Measure of Gay Related Stressors (Lewis, Derlega, Berndt, Morris, & Rose, 2001), a measure of LGB individuals’ cur- rent perceptions of family rejection due to sexual orientation. Lastly, higher scores on the mother version of the PPRS were also found to relate to higher levels of youth internalizing symptoms, school problems, and depressive symptoms, as measured by the Behavior Assessment System for Children (Reynolds & Kamphaus, 2004).

Instructions: Think only about your mother when filling out this questionnaire.

Think back to the week when your mother first became aware of your sexual orientation. Read the following statements and indicate how much you agree or disagree with each statement by circling a number. Remember, there are no correct or incorrect answers. These are your opinions.

The 5-point scale is repeated following each item.