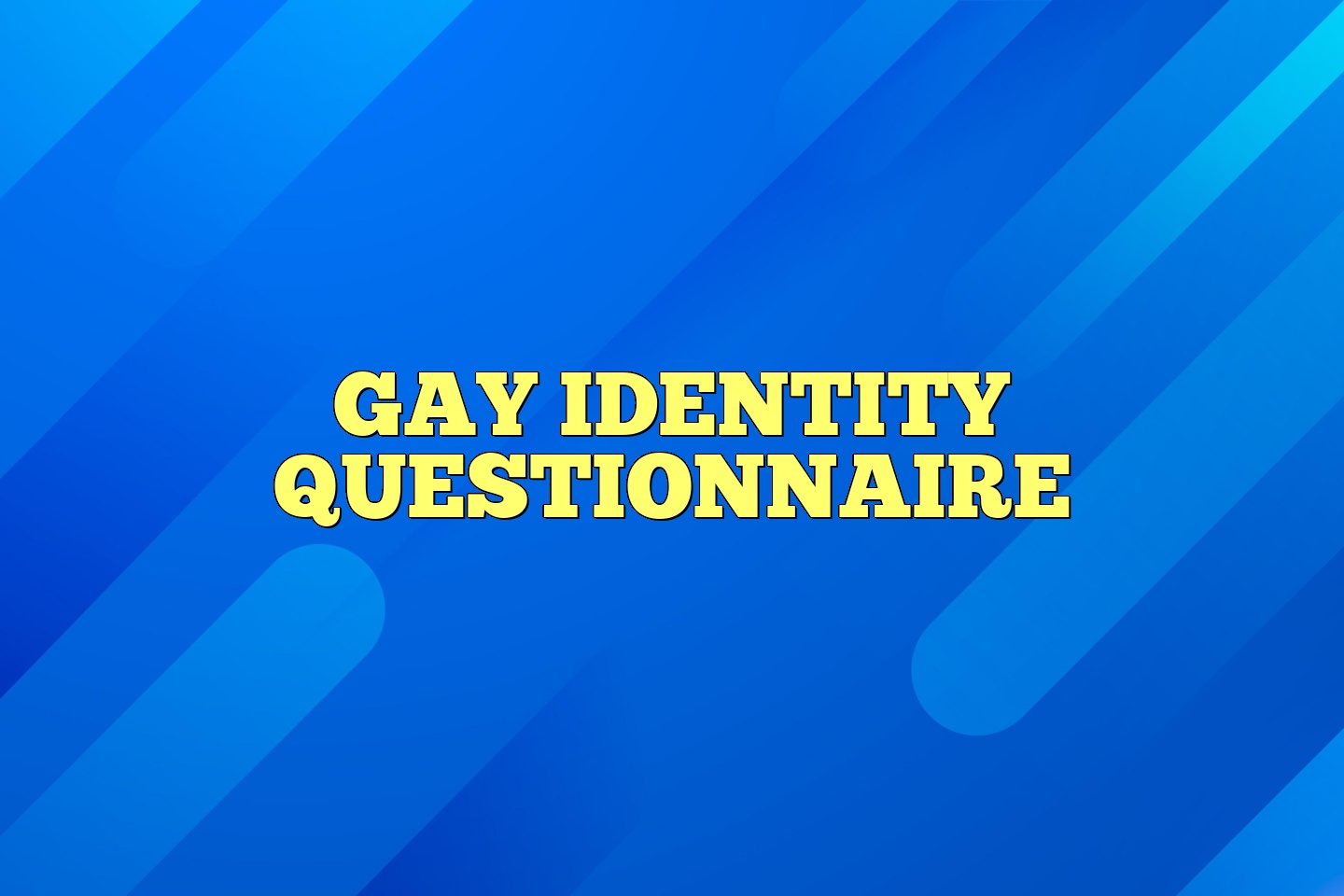 The Gay Identity Questionnaire (GIQ) can be used by clinicians and researchers to identify gay men in the develop- mental stages of “coming out” proposed by Cass (1979) in the Homosexual Identity Formation (HIF) Model. These stages include Confusion, Comparison, Tolerance, Acceptance, Pride, and Synthesis. Test construction procedures included the selection of questionnaire items based upon the constructs of the HIF model, and the establishment of reliability and validity for the GIQ through two pilot tests and one final administration of the instrument (Brady, 1983; Brady & Busse, 1994).

The GIQ is comprised of 45 true-false items and can easily be scored for the purpose of identifying the respondent’s stage of HIF. Findings suggest that the GIQ is a reliable and valid measure that can be used by clinicians and researchers to examine the coming-out process. Two hundred twenty- five male respondents were administered the final version of the GIQ and a psychosocial/background questionnaire. Efforts were made to recruit a developmentally heterogeneous sample of men with same-sex thoughts, feelings, and/or behavior. The majority of the respondents (179) were young (M age = 28.8 years), non-Hispanic White men residing in Southern California in 1983. All respondents indicated they had homosexual thoughts, feelings, or engaged in homosexual behavior. In addition to the author’s use, the instrument has been used in a number of doctoral dissertations and Master’s theses.

The GIQ consists of 45 randomly ordered, true-false statements to which respondents respond by circling either the letter T or F depending upon whether they agree or disagree with the statement. The instrument takes approximately 15–20 minutes to complete.

The scoring of the GIQ includes the following. Three items (Items 4, 22, & 40) are used as validity checks and identify that an individual has thoughts, feelings, or engages in behavior that can be labeled as homosexual. Respondents must mark at least one of these three items as True for the instrument to be considered appropriate for use in classifying the stage of homosexual identity formation.

Interitem consistency scores for the GIQ were obtained using the Kuder-Richardson formula (Hays, 1973). Too few respondents were identified in the first two stages of HIF for data analytic procedures to be utilized. The reliabilities for the other four stages were: Stage 3 (Identity Tolerance), r = .76; Stage 4 (Identity Acceptance), r = .71; Stage 5 (Identity Pride), r = .44; Stage 6 (Identity Synthesis), r = .78.

No statistically significant relationships were found between respondent age, education, income, religiosity, political values, and HIF stages. Findings that most demo- graphic variables did not confound the HIF process sup- ports the validity of the HIF model for predicting stages of coming out independent of those variables.

Findings also support a central construct of the HIF model which describes the importance of psychological factors in the evolution of a homosexual identity. Statistical tests revealed a significant positive relationship between respondent stage of HIF and a composite measure of nine self-report items assessing psychological well-being, F(3, 189) = 8.67, p < .01. Subsequent post-hoc analysis of ANOVA results using Tukey’s HSD test (Hays, 1973) revealed that respondents in Stage 3, Identity Tolerance, reported having less psychological well-being compared to their counterparts in Stages 4, 5, and 6.

Respondents in the latter three stages of HIF did not differ appreciably from one another on measures of psycho- logical well-being or homosexual adjustment. These latter findings suggest that homosexual identity formation may be a two-stage process rather than the six stages proposed by Cass (1979) in the HIF model. In the first stage (Identity Confusion/Comparison/Tolerance) respondents remain unclear about or do not like their homosexual identity, whereas in the second stage (Identity Acceptance/Pride/ Synthesis) respondents know and approve of their identity while maintaining different public identities.

Findings support the use of the GIQ as a brief measure for identifying young middle-class White men at one of the stages of homosexual identity formation proposed by Cass (1979). In order to increase the generalizability of the instrument, future researchers should recruit a sample that includes women and people of color. In addition, a refinement of the instrument so that homosexual identity is treated as a continuous variable with a summed scale score, rather than a categorical variable with a stage designation, would be an improvement in the measurement of homosexual identity formation.