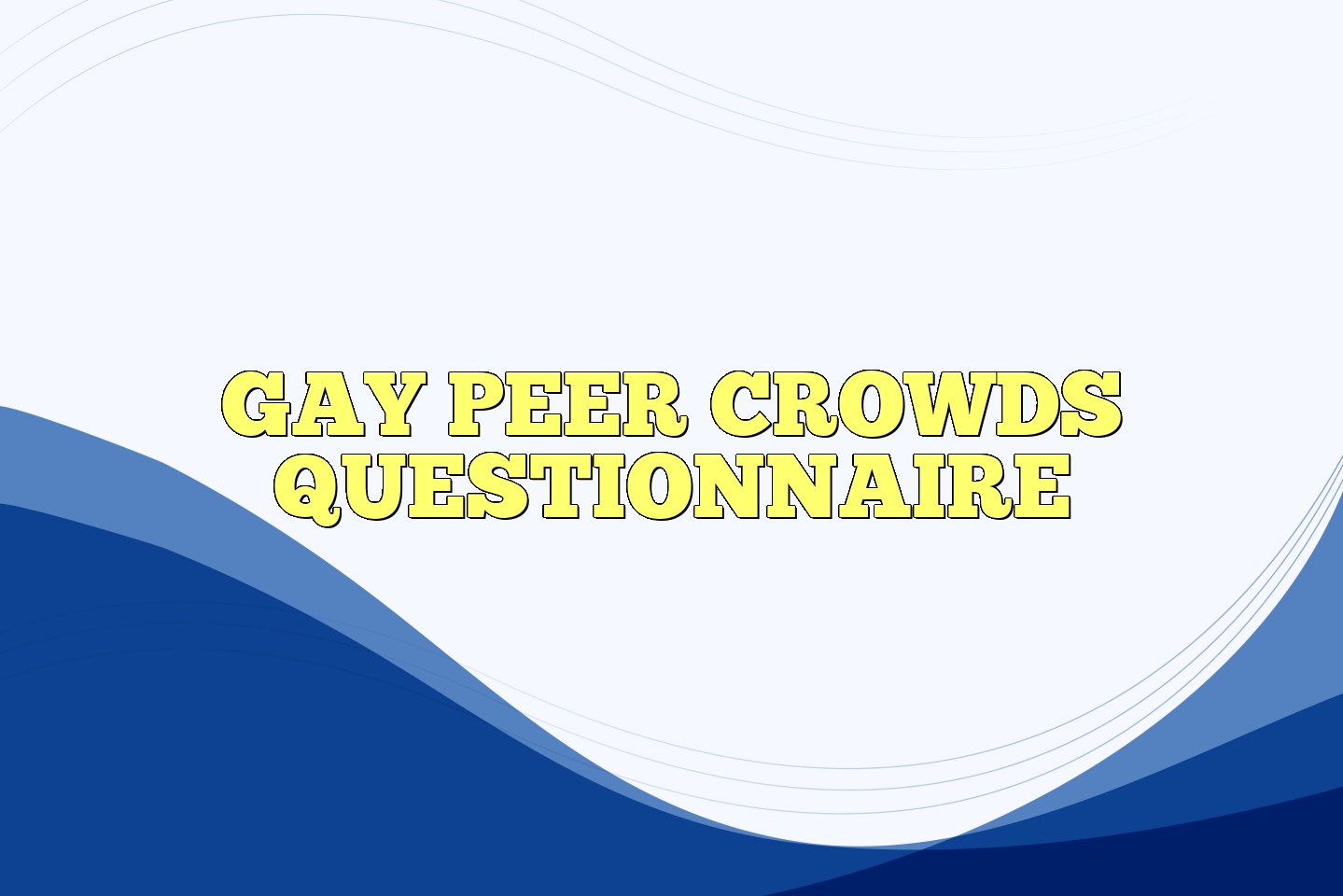 The Gay Peer Crowds Questionnaire (GPCQ) assesses self-identified gay men’s affiliations with distinct sub- groups that may exist within the larger gay community. Peer crowds of interest include Activist, Artsy, Bear, Circuit Partier, Drag Queen, Goth, Granola, Leather Men, Muscle Boy, Professional, Suburban, and Twink. Men are asked to give their opinions on whether these crowds exist, rate their identification with each crowd, and indicate their primary affiliation. Additional information, such as the reputation and attractiveness of each crowd, is also assessed.

The GPCQ is a 23-item self-report measure. The format of the GPCQ is based upon the Peer Crowds Questionnaire, a measure of adolescents’ peer crowd affiliations (La Greca, Prinstein, & Fetter, 2001; Mackey & La Greca, 2006). To examine the existence of gay peer crowds, respondents are provided with descriptions of 12 key peer crowds and asked whether they believe that each group exists. For example, men are asked, “Is there a group of gay men who are boyish-looking, with a slim or athletic figure and little body hair (‘Bois/Twinks’)?” Response options include Yes, No, and Unsure. Respondents are also asked to pro- vide other common names for each crowd and asked to list other adult gay peer crowds in an open-ended format (i.e., “What other adult gay peer crowds may exist?”).

To examine the degree of identification with gay peer crowds, respondents are then asked to rate the degree to which they identify with 12 peer crowds on a 5-point Likert- type scale (1 = Not at all, 5 = Very Much). In addition, participants are asked, “Which one of these groups, if any, do you identify with?” Participants are also asked how other groups view the individual’s peer crowd on a 5-point Likert scale (1 = Very Disliked, 5 = Very Liked), whether others who are not in the group are able to identify the group (Yes or No), and whether there are symbols, behaviors, or values associated with the group (Yes or No). Affiliation with gay peer crowds is measured through five questions related to perception of peer crowds, and close social network ties to peer crowds (e.g., “Which group does your closest gay male friend (not including your partner) belong to?” “Which group are you most attracted to?” “Which group does your relationship partner belong to?”).

Several steps were involved in developing the GPCQ. First, a preliminary list of gay subcommunities was generated from the limited empirical data available in this area (i.e., Clausell & Fiske, 2005; Peacock, Eyre, Quinn, & Kegeles, 2001). Next, this list was given to an informal focus group of gay men and to researchers who are experts in the area of psychological research and sexuality. Each person commented on the list by providing written descriptions of the peer crowds, listing other crowds that may exist, and providing general feedback. Descriptions from the focus group and researchers were combined with definitions provided by Peacock et al. (2001) to create the final list of gay peer crowds with their descriptions.

Respondents are provided with a copy of the GPCQ and asked to read instructions carefully. For each question, respondents should check the box corresponding with their answer. The GPCQ was developed specifically for self-identified gay men. A full administration of the GPCQ takes approximately 10 minutes.

Items on the GPCQ should be examined individually; that is, no summary scores need to be calculated. Some of the items are categorical in nature, whereas others (i.e., Items 14 and 16) are continuous, ranging from 1 (Not at all; Very Disliked) to 5 (Very Much; Very Liked).

Participants were 80% Anglo-European, 7% Hispanic/ Latino, 5% Asian or Pacific Islander, 2% African or Caribbean American/Canadian, 5% Mixed Ethnicity, and 1% Other. Participants were diverse with regard to highest level of education obtained (4% High School, 16% Some College, 37% Bachelor’s Degree, 29% Master’s Degree, 14% MD, PhD, JD or advanced degree). For all 12 peer crowds, the majority of men believe they exist. Men in the study were most certain about the existence of the following peer crowds: Drag Queens (97% yes), Bears (96% yes), Circuit Partiers (96% yes), Activists (94% yes), Twinks (93% yes), and Professionals (92% yes). Participants were less likely to endorse the existence of Granolas (22% unsure) and Goths (20% unsure).

Content validity was established during the development of the GPCQ. Experts in psychological and sexuality-related research and a small sample of gay men were asked to examine the GPCQ and provide feedback about the content of the GPCQ and its representativeness in assessing gay peer crowds. Additionally, men who identified a primary peer crowd affiliation also endorsed that their friends would place them in that same crowd and noted being attracted to men from the same group. For instance, 63% of men who identified primarily as a Bear also endorsed being primarily attracted to Bears. Further, 59% of men identifying as Professionals indicated they were primarily attracted to other Professionals.

Certain groups or “peer crowds” of gay men may exist in the United States or Canada. We’d like to ask you about whether or not you

Section I. Existence of Peer Crowds Please check the box indicating your answer. Yes No Unsure