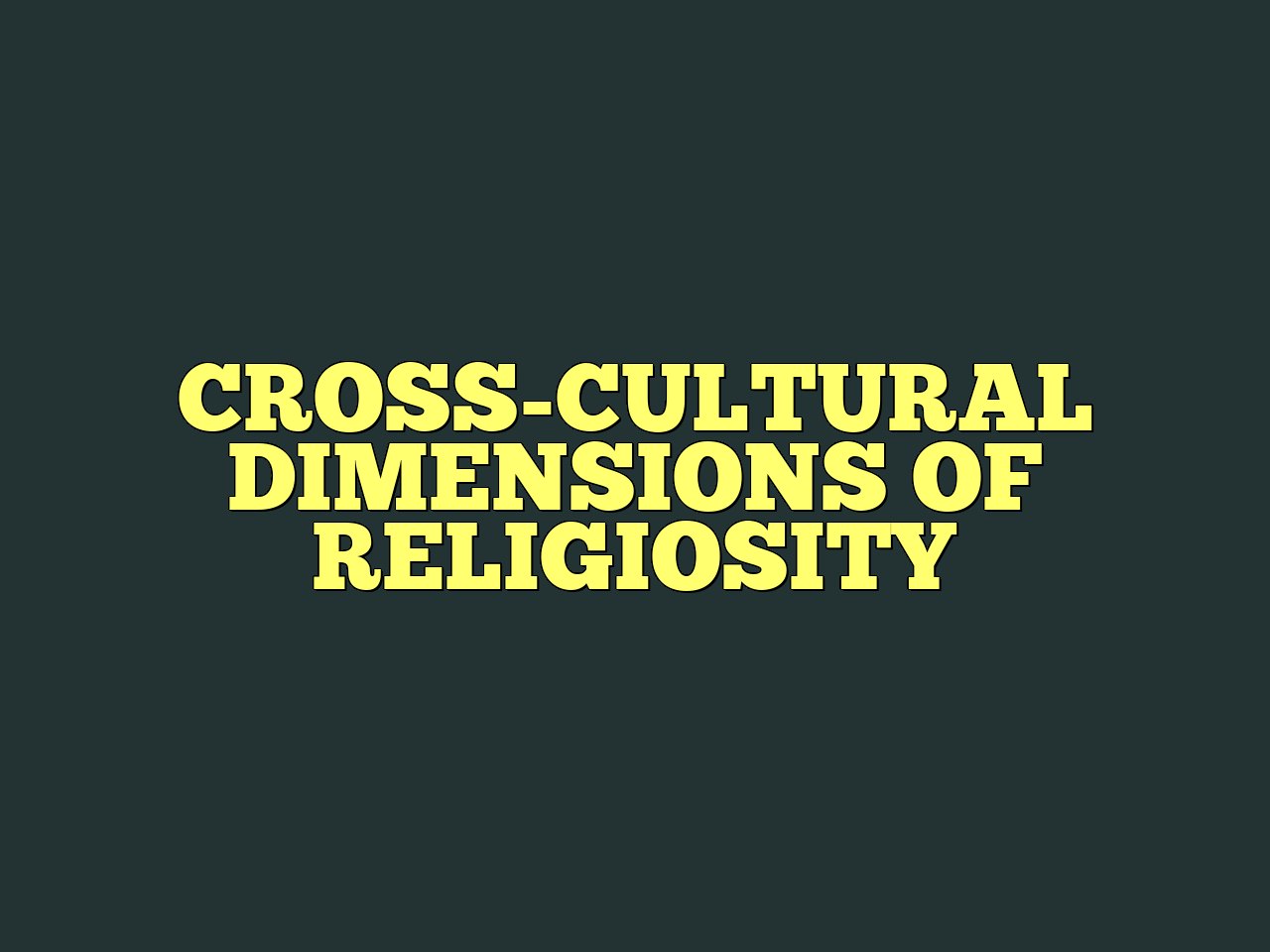 The Cross-Cultural Dimensions of Religiosity Scale measures the following: belief, experience, religious practices, reli­gious knowledge, individual moral conse­quences, and social consequences. These scales are related to the dimensions of religiosity identified by Glock and Stark (1966) and are part of the ongoing debate about the unidimensionality or multidimensionality of religion. In this regard, Hilty, Morgan and Bums (1984) as well as Hilty and Morgan (1985), present more recent discussion of some of the same issues. The Hilty et al. conclusion, based on a different set of items and different analytic techniques, supports a multidimensional view. Their seven dimen­sions of religiosity, however, are only par­tially similar to DeJong's six dimensions of religiosity.

DeJong, Faulkner, and War­ land (1976) have revised and modified a set of religious measures that had originally been developed using Guttman scaling tech­niques (Faulkner & DeJong, 1966). These measures assume a multidimensional model of religiosity like that advocated by Glock and Stark (l 966). However, DeJong and colleagues' version used a variety of factor analytic techniques to refine a pool of 54 items. The items were of varying formats, including Likert-type questions, open-ended questions, forced-choice questions, factual questions, matching questions, and so on. An initial factor analysis (oblique method) reduced the pool of items to the final set of 38 items. The scales and the number of as­ sociated items are described as follows:

The scales produced by Delong et al. (1976) are straightforward and easy to use. The entire set of 38 items takes about 20 minutes to ad­ minister. Although Delong et al. give no di­rections for scoring the scales, simple addi­tion of the answers produces composite scores. In many cases the higher the number of the answer, the higher the level of reli­giosity for that item. However, to guard against a response set, DeJong et al. re­ versed the answers in some scales, espe­cially those for experience, religious prac­tice, and social consequences. Therefore, some items must be reverse scored.

These scales were tested using a cross-cultural sample. The sample was composed of students at Penn­sylvania State University and the University of Bielefeld, Germany. In the fall of 1970, a total of 536 usable schedules for the Ameri­ can students and a total of 390 usable sched­ ules from the German respondents (total n = 926) was obtained. In both universities, the sample was a purposive nonrandom aggre­gate sample.

De Jong et al. (1976) report that the American and German students displayed a "strikingly similar dimensional pattern" of religiosity (p. 879). Although they answered the questions in rather different ways, the underlying pattern of religiosity was the same. This gives support to the idea that the six dimensions presented may transcend American religious settings and represent, at least, a more general Judeo-Christian pat­ tern. The specific differences observed be­ tween the American and German students were that the German students were less likely to attend church, less likely to en­dorse traditional Judeo-Christian beliefs about God and death, less likely to report they have experienced repentance, more likely to be knowledgeable about biblical and theological personalities, and more con­cerned about issues of social justice.

More recently Hilty and Stockman (1986) conducted a replication of the De­ Jong et al. (1976) research with two samples of Americans. One sample was composed of 503 adults in American Lutheran churches in Ohio, whereas the second sample was drawn from undergraduate students at Ohio State University (n = 385). Using the 38 items created by Delong and his colleagues, Hilty and Stockman found corroboration for five out of the six dimensions of religiosity. Essentially their work duplicated the find­ings of DeJong et al., with the exception that the religious practice dimension did not emerge in the factor analysis. They also dropped one of the items from the Social Consequences Dimension (the item on capi­tal punishment). The resulting pool of 32 items and five factors seems to fit the data better and give higher degrees of fitness using goodness of fit statistics.

In addition, Hilty and Stockman sought to corroborate DeJong's second order factor analysis. In this case, however, they found greater differences between the two studies. Instead of finding three second order factors as did Delong, Hilty and Stockman found only two second order factors for their first sample and only one factor for the second sample. Their conclusion is that although the multidimensionality of religion is sup­ ported by some studies (including data from their Lutheran study), the possibility re­ mains that a single dimension of religiosity focusing on the area of ideology or religious belief may capture much of what is included under the notion of religiosity. In general, the replication by Hilty and Stockman re­veals that the Delong et al. (1976) measures fare quite well in their estimation.

No reliability data were re­ ported.

The only validity checks were al­ ternative statistical analyses. DeJong et al. (1976) report that analyses based on techniques of image analysis and a derived solu­ tion based on a varimax rotation (factor analysis) produced no significant differ­ ences in the factor structure.

1. Have you ever had an experience which, at the time, you thought of as a religious experi­ence? If so, which of the following comes closest to expressing the dominant characters­ tics of your experience?
For questions 2-4, answer according to the following:
*2.There are particular moments in my life when I feel "close" to the Divine.
*3.1 know what it feels like to repent and experience forgiveness of sin.
*4.1 have experienced the joy and peace which comes from recognizing that one is a for­ given sinner.

* l. How often do you attend Sabbath worship services?
*2. Do you presently belong to a church (or synagogue)?
3. Do you contribute funds to the church?
*4. How would you describe your use of the Bible?
5. In how many religiously affiliated organizations, groups, or activities (such as choir, youth groups, committees, and boards, etc.) do you participate?

For each of the following statements, answer according to the following.
I. Misrepresenting your age to be served alcoholic beverages is acceptable behavior.
2. It would not bother my conscience to use marijuana.
3. Premarital sexual relations between a boy and a girl who are "in love" is not immoral.
4. Stealing hubcaps or shoplifting minor items is not immoral.
5. Violence can be a justifiable form of civic protest.
6. A woman should be able to obtain an abortion for any reason.

For the following statements, answer according to the following.
*1.1 am for better housing for disadvantaged groups in society.
*2.1 stand for the eradication of poverty among groups of this society.
*3.I support full employment opportunities for all.
*4.I support programs which guarantee economic security for old age.
*5.1 think capital punishment should be abolished.

Clayton, R. R. (1974). The five dimensions of religiosity: Toward demythologizing a sacred arti­ fact. Journal for the Scientific Study of Religion, 13, 135-143.