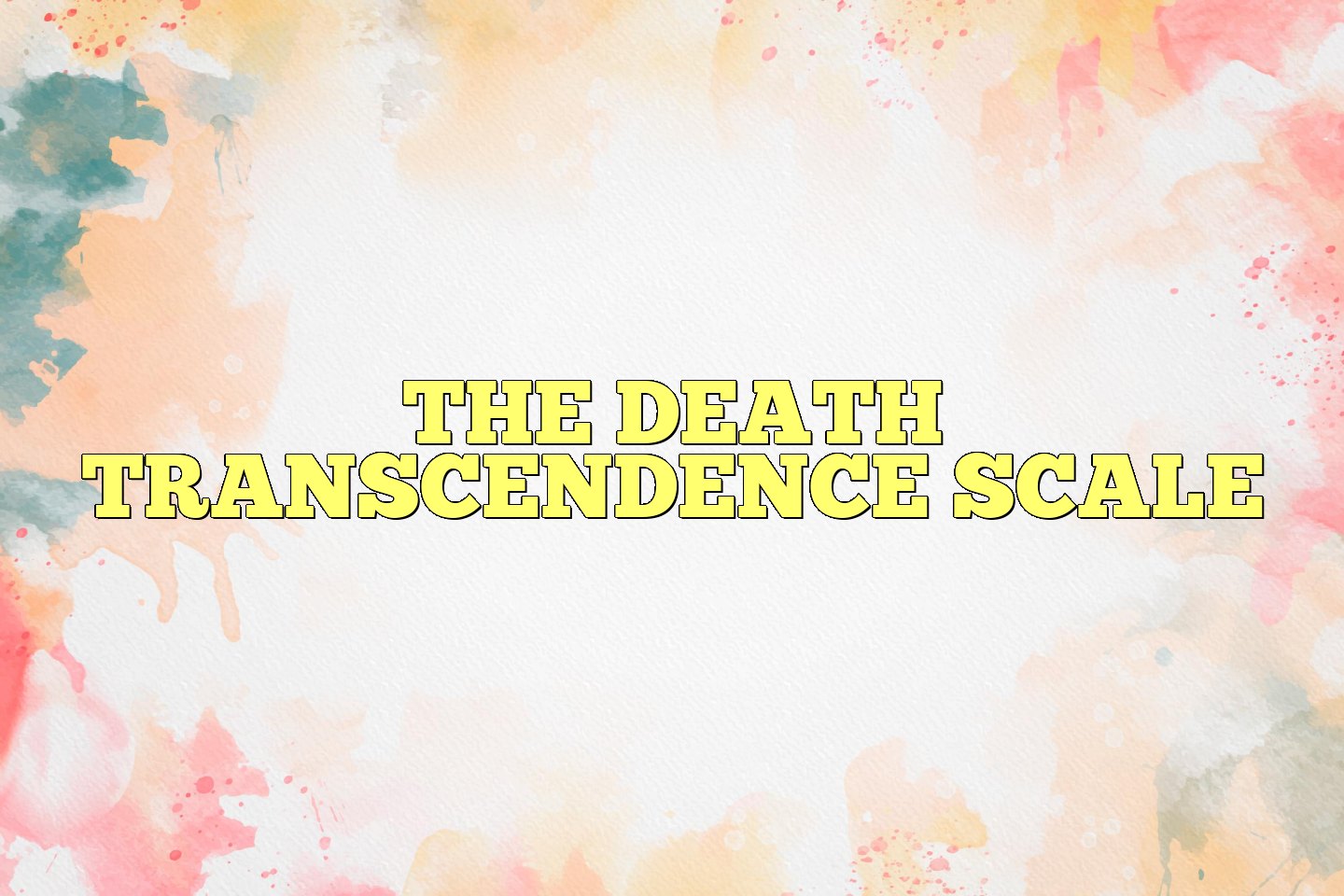 The Death Transcendence Scale operationalizes the African proberb which states that a person is not truly dead unless he is forgotten. James (l 96 l) observes that religion for many people means "immortal­ity and nothing else." Lifton (l 979) elaborates this sentiment by asserting that per­ sons try to transcend death and seek immor­tality by several means, including mystical, religious, nature, biosocial, or creative modes.

The items in this scale seek to identify how individuals implicitly wish to be re­ membered after they die. The theoretical foundation for the scale, therefore, is strong and the items measure a cognitive orienta­tion toward death, except for the experi­ence-based mystical items.

As developed, the scale con­tains 23 items with a 4-point response for­ mat. The three items of the biosocial mode, and the five items for each of the other modes, create five subscales. The mysticism items are from the first factor of Hood's Mysticism Scale (1975); items for the other modes are new. The score is the sum of the responses on the Likert scale, the total of each subscale indicating the level of invest­ment in that particular mode.

In subsequent testing of the scale, Van­derCreek and Nye (1993) add three addi­tional biosocial items. They report the strength of all six. The strongest of these can now be included in the scale.

This instrument requires no special skill to administer, score, or interpret. No instructions are necessary beyond the usual guarantee of confidential­ity and the emphasis on no "right" or "wrong" answers.

In their first study, Hood and Morris (1983) report results from three separate samples of undergraduate psychology majors. The samples consist of 587, 342, and 105 students respectively. In the same report, they describe interview re­sults from 30 female and 9 male older adults. They code these interview results in relation to four of the death transcendence modes (the mysticism items are excluded because earlier reports [Hood, 1975] indi­cated that older persons experience diffi­culty in responding to these items).

VandeCreek and Nye (1993) report one concern about the mysticism items. Some respondents found them difficult to under­ stand, particularly the ones that were worded negatively.

They recommend that some items be re­ worded (this problem may be an extension of that reported earlier by Hood [1975]).

Hood and Morris (1983) reported a principle components factor analysis fol­ lowed by a quartimax rotation. It identified 23 items clearly related to Lifton's five modes, which they use in their scale.

They administered the scale to 342 un­dergraduate psychology students along with Spilka's Fear of Death Scale (1977), which contains five subscales: Fear of the Dying Process, Lack of Fear of Death, and Fear of Loss of Experience and Control in Death. The major finding was that all modes except religion were significantly correlated with the Sensitivity toward Death subscale.

In the third sample with 105 students they demonstrated that Spilka's Death Pre­spective Scale relates meaningfully to re­sults from both the Death Transcendence Scale and intrinsic/extrinsic religiosity as measured by the scale developed by Allport and Ross (1967). These results suggest that perspectives concerning death transcen­dence relate to other consciously held per­spectives on death. Additionally, intrinsic religiosity significantly correlated with all modes: positively with the religious, mysti­cism and biosocial modes and negatively with the creative and nature modes. Extrin­sic religiosity correlated positively with the creative, biosocial, and nature modes.

VandeCreek and Nye (1993) report re­sults from two factor analyses, including the three new items. The results of the second analysis using the hospital-related data are more similar to those of Hood and Morris. However, in both analyses the nature items seem to be the weakest. Larger samples are needed for more definitive re­sults.

Please respond to each of the statements below using the following rating scale.

The last three items are added by VandeCreek and Nye. All items should be placed in random order.

Hood, R. W., Jr. (1975). The construction and preliminary validation of a measure of reported mystical experience. Journal for the Scientific Study of Religion, 17, 179-188.