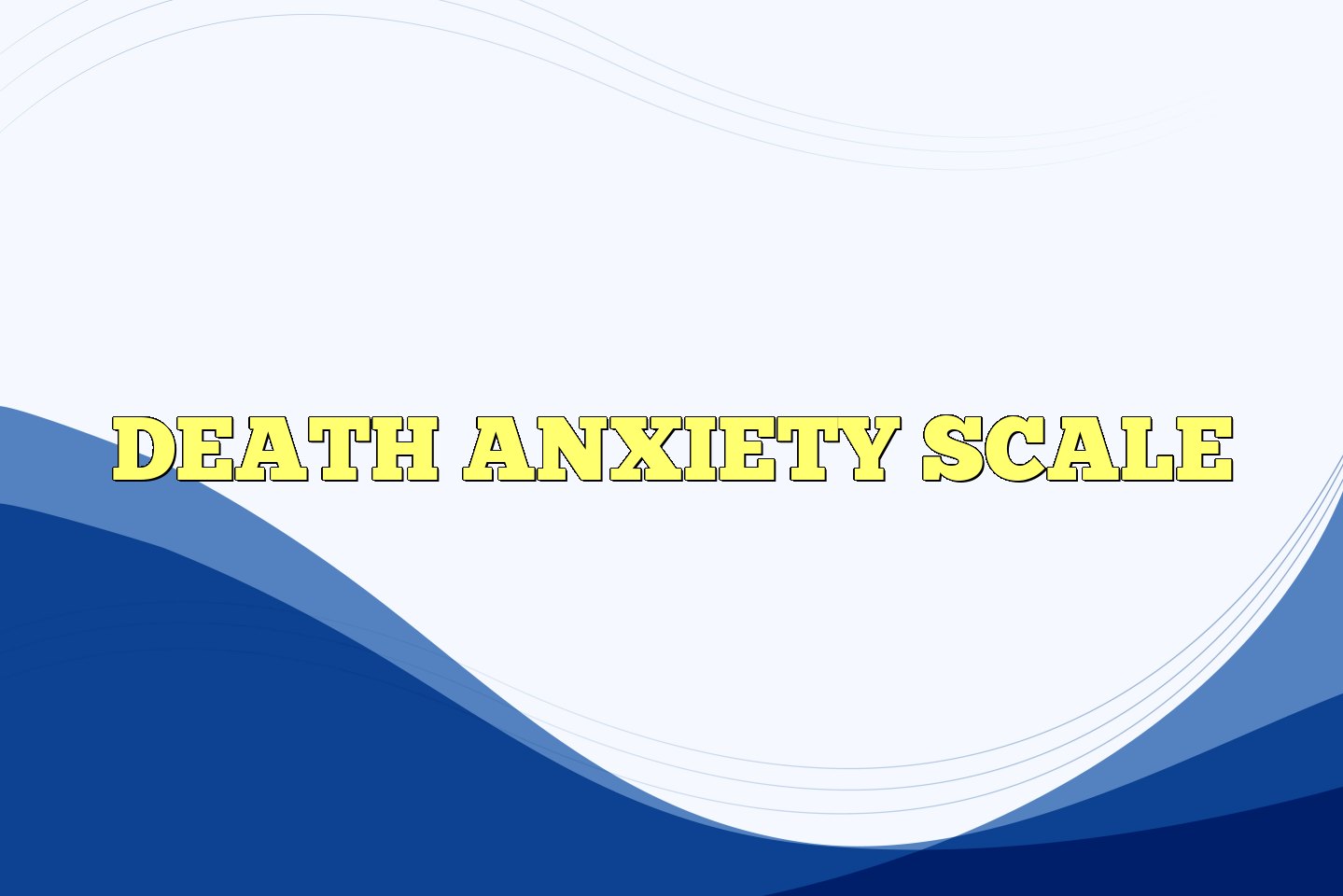 The Death Anxiety Scale (DAS) measures an individual's attitudes toward death-related topics. Unlike some similar measures, Templer's DAS (1970) takes into account a wide range of experiences related to death.

Many theorists have contributed to a growing literature on death anxiety, with the following four factors emerging as common components:

Death anxiety, by providing a vital link be­ tween our perceptions of crises and how well we cope, may be an "integral part of the flow of life itself" (1986, p. 112). While the focus may be fourfold, Templer chose to construct an instrument with one score, ex­pecting that refined perspectives on the fear of death could be developed after gross pa­rameters were established.

The DAS re­ quires no special examiner skill to adminis­ter or score. Face validity of the measure is high. The DAS has been translated into Ara­bic, German, Spanish, Hindi, Chinese, Ko­rean, Afrikaans, and Japanese.

Comprehensive representative norms have not been estab­lished. A number of means and standard de­viations relative to specific populations have, however, been published (e.g., Tem­pler & Ruff, 1971; Lonetto & Templer, 1986). Scores for these participants range from 4.5 to 7.0, with a standard deviation of slightly more than 3.0, and with females consistently scoring higher than males.

One cross-sectional study of 226 pre­ dominantly middle class, Caucasian, well­ educated individuals located throughout the United States will serve as an example (see White & Handal, 1991). The overall mean in this study was 6.16 (6.76 for males, 8.04 for females), with a standard deviation of 3.21 (2.82 for males, 3.27 for females). Some evidence suggests that DAS scores tend to decrease with age (Lonetto & Tem­ pler, 1986).

Three weeks after the first ad­ ministration, 31 community college partici­pants completed the DAS a second time. The DAS evidenced a test-retest reliability correlation coefficient of .83. Reasonable internal consistency was demonstrated with a Kuder-Richardson reliability coefficient of .76.

Considerable validity data has been gathered on the DAS. Face validity was established by subjecting an original set of 40 items to the judgment of a clinical psychologist, two clinical psychology grad­uate students, and four chaplains in a state hospital. Nine items failed to evidence suffi­cient face validity and were therefore dropped from the scale.

Internal consistency was established by determining item-total score point biserial correlation coefficients for the 31 remaining items. Sixteen items failed to consistently reach statistical significance, leaving the 15 items that are found on the final version of the DAS.

Construct validity was addressed in two separate projects (Templer, 1970). In the first, DAS scores of 21 presumably high­ death-anxiety psychiatric patients were compared to those of a matched (diagnosis, sex, approximate age) set of control pa­tients. The high-death-anxiety patients had a DAS mean of 11.62, while the control group had a mean of 6.77 (t = 5.78, p < .01), thereby offering supporting evidence of construct validity.

In the second project, the DAS, along with Boyar's Fear of Death Scale (FOOS; Boyar, 1964) and the MMPI, was adminis­ tered to 77 undergraduates. Correlation with the FOOS was .74, providing mutual evi­dence for the validity of both scales.

The MMPI was chosen because it con­tains three well-known anxiety scales, namely, the Manifest Anxiety Scale, the Welsh Anxiety Scale, and the Welsh Anxiety Index. If the DAS failed to correlate as highly with these scales as they do with one another, then it could be argued that the DAS is not measuring anxiety in general, but perhaps death anxiety specifically. Cor­ relations with these scales were measured at .39, .36, and . l 8 respectively. Although it is clear that some correlation is present be­ tween death anxiety and anxiety in general, the DAS's correlation with the FOOS was much higher than with these general mea­ sures of anxiety, providing support for the contention that Templer's DAS does possess discriminant validity, and it is not just an­ other measure of anxiety in general.

Boyar, J. I. (I 964). The construction and partial validation of a scale for the measurement of the fear of death. Unpublished doctoral dissertation, University of Rochester, Rochester, New York.