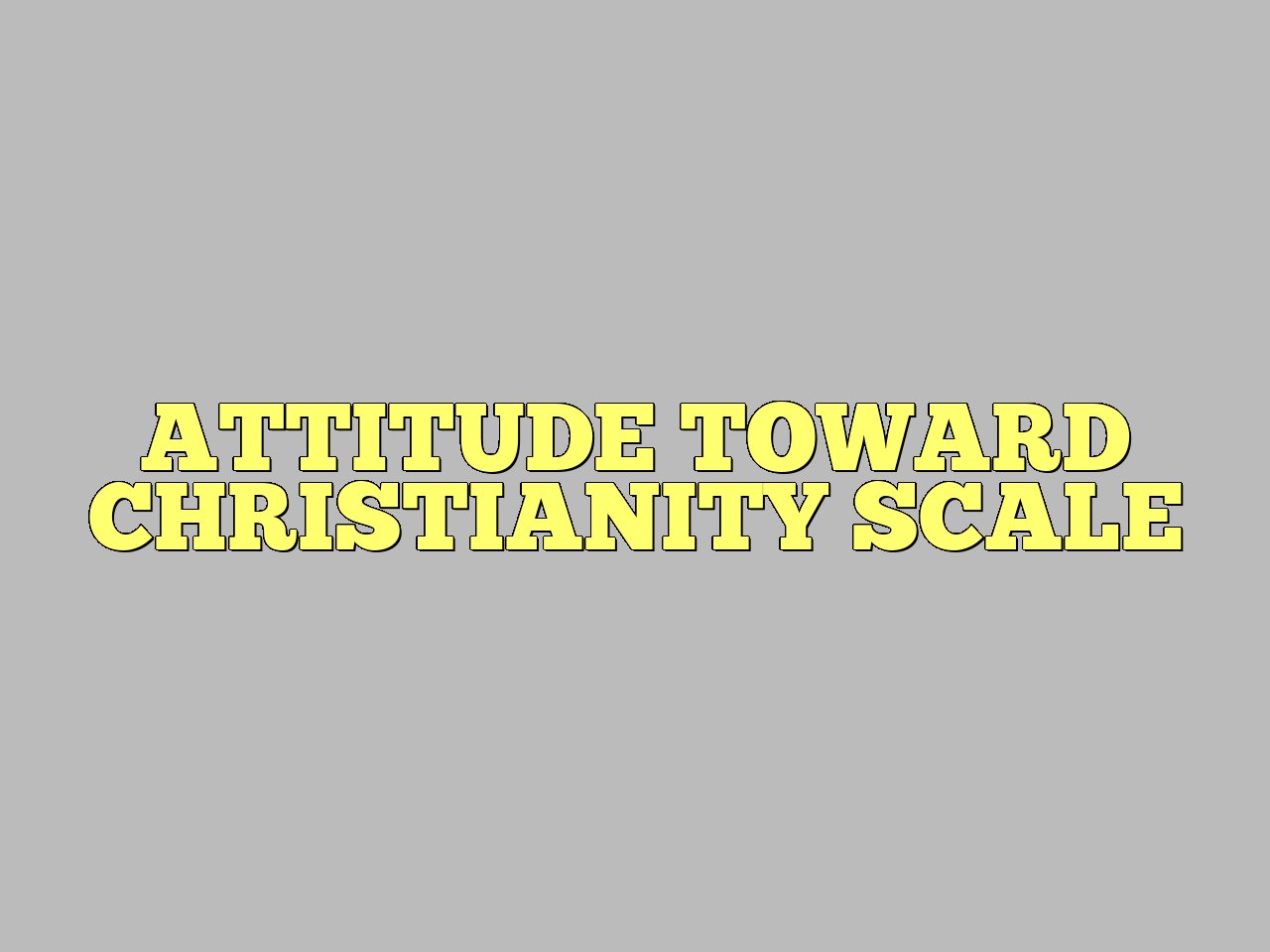 The attitude toward Christianity Scale focuses solely on people's perception of the Christian religion. References to Jesus, the Bible, and prayer prevent it from being used as a generic measure of interest in religion.

Francis (1993) conceptualizes attitude as an "underlying, deep seated and relatively stable evaluative predisposition" (p. 4). While some researchers conclude that per­ sons' attitudes are unrelated to their behav­ior, the author positions himself with those who conclude that attitudes can predict be­haviors when the two are measured in simi­ lar manners and in similar degrees of speci­ficity.

This scale measures attitudes toward Christianity for both children and adults. It examines persons' self-evaluation of their personal prayer life, church atten­ dance, and beliefs about Jesus, God, and the Bible. Because these variables clearly be­ long to the religious domain, they are likely to reflect one's general view of Christianity. Form ASC4B of the child and adult ver­sion consists of 24 (Likert-type) items to which subjects respond on a 5-point scale ranging from "agree strongly" to "disagree strongly." Eight questions are reverse scored because they are negatively phrased. Higher scores indicate more favorable attitudes toward Christianity. The child and adult versions differ by two questions. The item "I like school lessons about God very much" was altered in the adult version to "I like to learn about God very much"; the item "saying prayers in school does no good" was altered to "I think saying prayers does no good." A short form of this scale also has been developed. Preliminary findings suggest that it strongly correlates to its parent version.

This scale re­ quires no special administration skills and can easily be administered to individuals or groups. It is brief and takes less than five minutes to complete. Because some of the items are negatively phrased, children under age 8 may have difficulty understanding their meaning. Their scores should be inter­preted cautiously (Francis, 1988).

Normative data for the adult version is presently less extensive, but several studies have provided means and standard devia­tions for the following groups: a British sample of 185 adults with ages ranging from 18 to 64 (Francis & Stubbs, 1987); a sample of 126 undergraduate students in the United Kingdom (Francis, 1993); a sample of U. S. adults with ages unreported and the mean and standard deviations reported only by gender (Lewis, 1995; Maltby, 1994).

Short versions of this instrument have been developed for both the child and adult versions. Preliminary studies have yielded samples with reliability statistics similar to the parent scales (Francis 1993).

Subjects completing the ASC4B are likely to be aware that they are answer­ing questions related to their views of Christianity, which supports the face validity of this instrument. Because no specific rela­tionship can be assumed between attitude and behavior, the author argues that the sup­ port for this instrument's construct validity is inferred by determining the extent to which attitude scores predict different as­pects of religious behavior and beliefs. Re­ search studies (Francis, 1988, 1993) utiliz­ing the child version of this instrument have yielded outcomes predicting the following: gender attitudes toward religion, decline of interest in religion with age among adoles­cents, personal practice of religion versus public expression, parental religious behav­ior and children's attitude toward religion, and personality variables and attitudes to­ ward religion.

Research with the adult version of the ASC4B is less extensive but generally sup­portive of its construct validity. Several studies have yielded results demonstrating strong relationships between religious attitudes and the following: religious practices, religious beliefs, psychoticism, and other personality variables. Some studies have yielded findings differing from previous re­ search with the child's version. Gender, for example, has been significantly correlated to attitudes toward Christianity with chil­dren, but this relationship has produced mixed results with adults. Scores on lie scales, extraversion, and neuroticism also have produced unanticipated relationships to the ASC4B. These disparate findings may reflect the actual differences between child and adult populations as opposed to reflect­ing the ASC4B's inability to measure reli­gious attitudes.

Read the sentence carefully and think, "Do I agree with it?"

Francis, L. J. (1992). Reliability and validity of the Francis Scale of attitude towards Christianity (adult). Journal of Comparative Religious Educa­ tion and Values, 4, 17-19.

Francis, L. J. (1993). Attitudes towards Chris­ tianity during childhood and adolescence: Assem­ bling the jigsaw. Journal of Beliefs and Values, 14(2), 4-6.

Maltby, J. (1994). The reliability and validity of the Francis scale of attitude towards Christianity among Republic of Ireland adults. Irish Journal of Psychology, 15, 595-598.