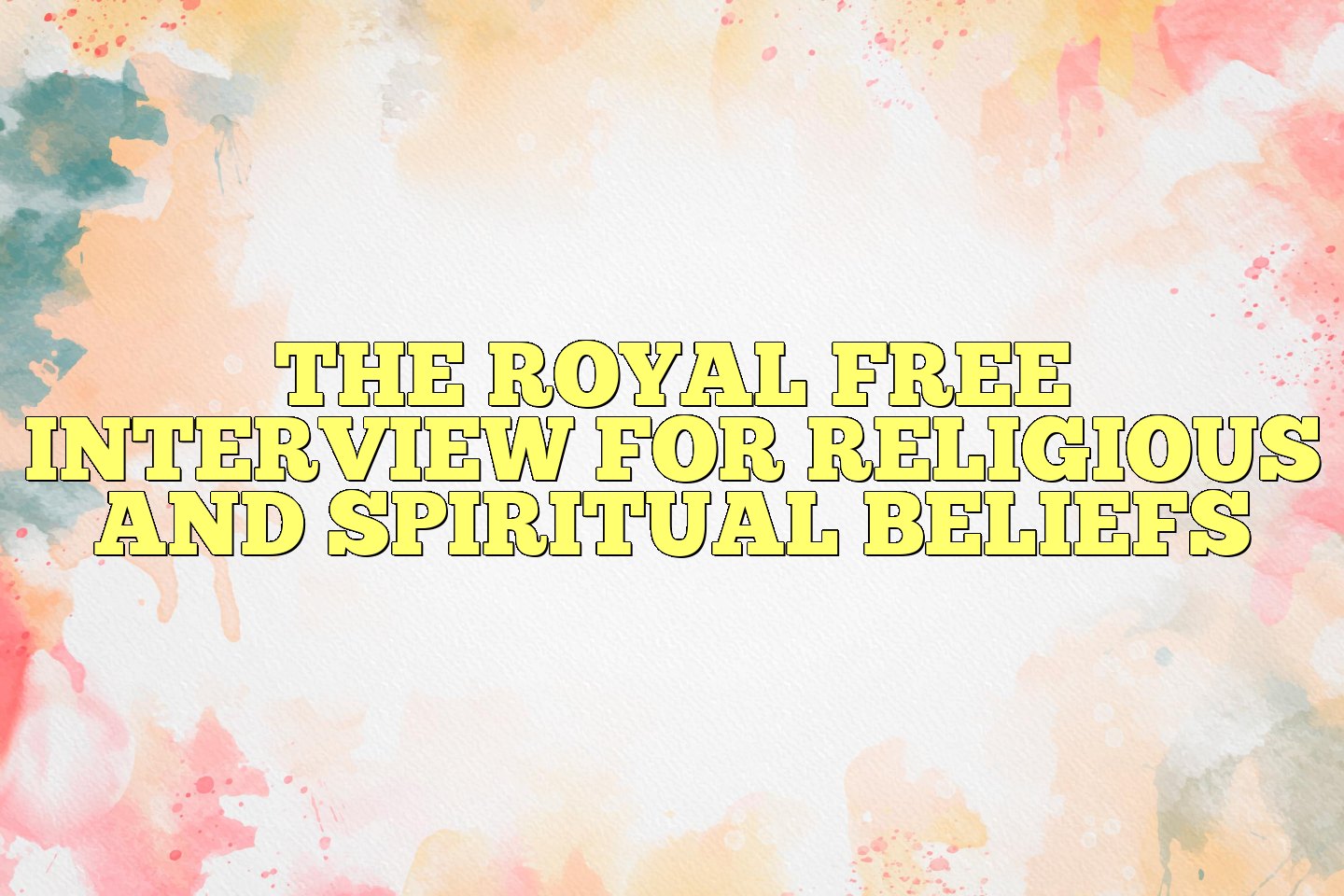 The ROYAL FREE INTERVIEW FOR RELIGIOUS and Spiritual Beliefs attempts to estab­lish whether spiritual, religious, or philo­sophical beliefs can be empirically measured in patients admitted into the hospital with an acute physical illness and, ultimately, to de­termine if those beliefs have any influence on the outcome of the illness. The interview is meant to assess beliefs that are based not just upon North American Christianity (a serious limitation of most published religious mea­ sures according to the authors), but upon a broader understanding of the religious, spiri­tual, and philosophical. As such, religion in the survey refers to the practice of and/or the framework for a system of beliefs, codes, rit­uals, and values. Spiritual is taken in its broad sense to mean an individual's belief in a power extraneous to him or herself. A search for meaning in life without reference to an external power is referred to as philo­sophical belief in the survey.

An early version of the inter­ view was used in a study of 300 patients ad­ mitted into the Royal Free Hospital of Lon­ don (King, Speck, & Thomas, 1994). The results of that study led to the refinement of the instrument into its present form as re­ ported in King et al. (1995). The scale con­ sists of a section (Section A) for demo­ graphic data and a second section (Section B) for a physician's assessment of the pa­tient's condition. After a paragraph of in­structions, the third section (Section C) con­tains the main body of the religious survey. This third section follows a branching for­ mat and has questions about the nature of the subject's spiritual beliefs and religious and philosophical understanding. (Ques­tions in Section C could be used in settings other than hospitals or where the subjects are ill.) Depending on the answers given by the subject, the interviewer will take various branches through the survey. Some of the questions require the subject to respond

quantitatively by indicating on an 11 point scale (0-10) how strongly he or she holds a particular belief.

The survey is easy to administer and score, requiring only the summation of scores given on the quan­titative scales for interpretation. An excep­tion to this is the scoring of Question 2, which requires the test administrator to determine, based on an open response ques­tion, whether the subject has expressed a religious understanding, a spiritual under­ standing without religious observance, or a philosophical understanding without any religious or spiritual understanding. Di­rections for administration are provided within the questionnaire as are definitions of religion, spiritual, and philosophy to be used by the subject as he or she takes the survey.

Three reference populations were used to standardize the in­terview. In each of the three populations, only those individuals who could read and speak English were included. The popula­tions used and the number of subjects in­cluded from each were the following: (a) a convenience sample of staff working in var­ious departments at the Royal Free Hospital (n =153), (b) a consecutive series of non­ acutely ill patients at a general practice in London (n =123), and (c) individuals strongly associated with a religious faith (e.g., chaplains, ministers, nuns, daily ob­ servant Muslim staff at the Royal Free Hospital, administrative staff associated with re­ligious organizations) selected from among personal contacts in order to validate the spiritual section of the survey (n = 29).

Subjects from the staff at the Royal Free Hospital (RFH) differed from the general practice (GP) subjects in that they came from a higher social class (Mantel-Haenszel test for linear association = 33.16, df = 1, p < .0001) and were older (Mann-Whitney U = 7507.5, p = .0039). Religious faith was reported by 45% of the RFH staff and 47% of the GP subjects and was equally likely among men and women. The Christian faith was reported in 75% of the total subjects. Of those reporting religious faith, 67% of the RFH group and 45% of the GP group practiced their faith on a daily basis (prayer, reading, etc.); 21% and 25% weekly; and 10% and 3 I% monthly or less. Again, there were no differences in frequency of reli­gious practice among males and females. Of the RFH staff, 71% reported having a spiritual belief, compared to 75% of the GP subjects. The GP patients reported a higher mean score on the spiritual scale, questions 3+9+10+11+12 (30.2 vs 25.3), but there was no difference between the two groups on the philosophical scale, questions 3+15+16+17 (22.1 vs 22.0). Finally, there were no significant associations between age or social class and spiritual or philo­sophical scale scores. Mean scores on the spiritual scale were higher for men (30.0), however, than for women (26.6), t(199) = 1.81, p = .07. Although the stated purpose of the inter­view was to assess religious, spiritual, and philosophical beliefs in populations not lim­ited to a particular religious creed or philos­ophy, a limitation of the standardization procedure, as pointed out by the authors, was that the number of non-Christian people interviewed was insignificant. Standardization in people of other ethnic, religious, and cultural groups remains to be performed.

Comparisons with other measures of religious or spiritual belief were not made, so concurrent validity is unknown. Criterion validity was assessed in two ways:

The Pearson correlation for the associa­ tion between the spiritual scores and reli­ gious observance was 0.41 (p < .0005); a linear relationship between frequency of re­ ligious observance and strength of belief was seen. The mean spiritual scale score of the third reference group (37.1) was signifi­ cantly higher than the combined scores of the RFH and GP groups (27.6), t(228) = 4.06, p < .0005.