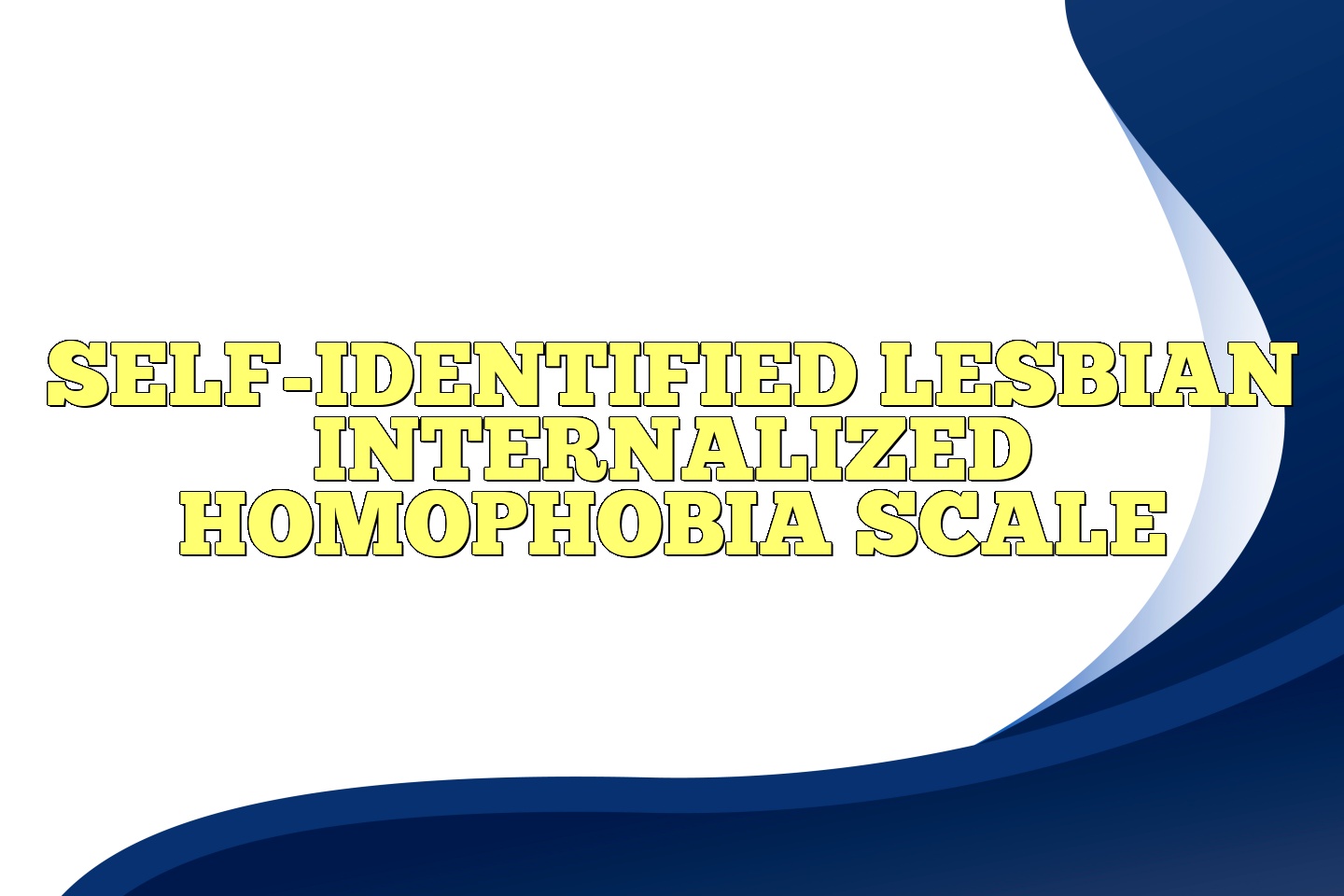 The Self-Identified Lesbian Internalized Homophobia Scale (SLIHS) was developed to gain a greater understanding of internalized homophobia in the lives of women who identify as lesbian and to address significant gaps in the literature regarding this topic. It has been hypothesized that internalized homophobia is linked to the elevated rates of mental health and substance abuse issues experienced by gay, lesbian, bisexual, and transgender (GLBT)

individuals, including the disproportionately high rates of suicide among GLBT youth. However, although previous research suggests internalized homophobia is a statistically significant and distinct factor in the lives of gay men (Meyer, 1995), there is a dearth of research regarding this issue among other GLBT groups, including lesbians. Of the few existing empirical studies regarding internalized homophobia among lesbians, many rely on questions developed to measure this construct among gay men rather than those that appropriately address lesbian culture (Radonsky & Borders, 1995). Other studies are limited owing to a lack of theoretical support, small sample size, or additional methodological issues (DiPlacido, 1998; Peterson & Gerrity, 2006). Although there are several published scales that assess internalized homophobia among men, only one scale addresses women (Szymanski & Chung, 2001). However, this scale was validated using a sample that included a significant number (approximately 30%) of participants who did not identify as lesbian and was biased in terms of education level, and it includes questions that confound internalized homophobia with other psychological issues or personality traits.

The SLIHS is a self-administered survey that is completed by women who self-identify as lesbian. The instrument includes four subscales, Visibility, Connectedness, Self- Acceptance, and Judgment, and a total of 30 closed-ended questions.

This two-page self-administered survey takes approximately 3 minutes to complete. The response has been very high: Over 95% completed the survey.

Overall and subscale scores can be calculated. Possible overall scores range from 30 to 120 (with higher numbers representing greater internalized homophobia), whereas subscale scores range from 7 to 28 for Visibility (Items 1–7) and Connectedness (Items 8–14), 5 to 20 for Self- Acceptance (Items 15–19), and 11 to 44 for Judgment (Items 20–30). The Likert-type scale response categories and associated points for about half of the items are the following: Strongly Agree = 1, Agree = 2, Disagree = 3, and Strongly Disagree = 4. The remaining items are reversed (R), with point structures as follows: Strongly Agree = 4, Agree = 3, Disagree = 2, and Strongly Disagree = 1.

The SLIHS was validated with a sample of 786 women, ranging in age from 18 to 82, from 39 states across the United States (Weibley, 2009). The sample was 81.7% White, 4.7% Hispanic, 4.6% Asian, 4.4% African American, 3.8% Biracial, and 0.8% other. Confirmatory factor analysis confirmed the internal reliability of the four subscales, with Cronbach coefficient alpha values ranging from .74 to .85. The original scale items were developed by lesbian focus group participants using the concept map- ping technique (Trochim, 1989), and the construct validity was assessed and affirmed by a total of 14 face and content validity reviewers.

The scale was copyrighted by Stacy Weibley in 2009.

Trochim, W. (1989). An introduction to concept mapping for planning and evaluation. Evaluation and Program Planning, 12, 1–16.