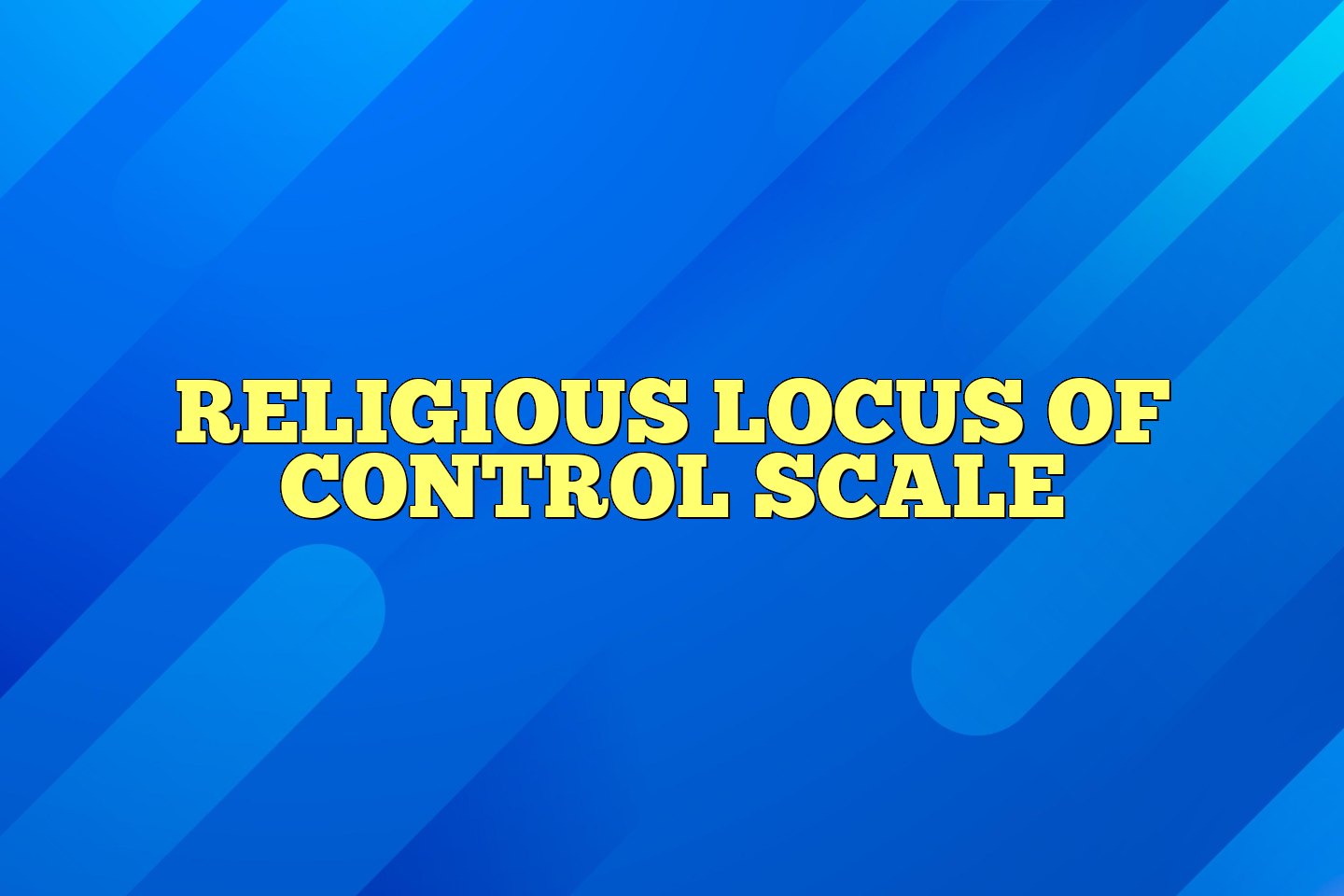 The Religious Locus of Control Scale is a revision of Rotter's (1966) Inter­nal vs. External Control Scale that mea­ sures the extent to which people believe that control of their lives is in their own hands (internal) or that outcomes are beyond their own control (external). This par­ticular revision addresses the concern that the strong chance, luck, and fate terminol­ogy of the Rotter scale may result in re­duced appropriateness for strongly reli­gious groups.

These two scales are revisions of Rotter's (1966) Internal vs. External Control Scale. Subjects are asked in a forced-choice format to indicate which of two statements (one of which reflects exter­nal control, the other, internal control) more closely represents their own thoughts. The complete instrument contains 29 items, in­cluding six distracters. Hence, only 23 of the items are scored. One's score is the number of external items selected. The loca­tion of the internal and external responses vary, such that 12 of the external options ap­ pear first in the pair, and 11 of the external options are last.

Eight of the original pairs of items in­cluded terminology on one or both state­ments relating to chance, using the words "accidental happenings," "chance," "fate," "flipping a coin," "luck," and "right breaks." The authors were concerned that religious individuals might be drawn to the internal items, not because they themselves are internal in beliefs but because they re­ject the notion of impersonal arbitrary con­trol that is implied by such terms.

Hence, these items were rewritten to mini­mize such connotations. In the religious revi­sion, the authors substituted references to God control, for the most part, in place of these references to chance. They inserted the terms "fortune," "God's help," "other powerful forces," "providence," "spiritual as­sistance," "spiritual guidance," "spiritual powers," "supernatural forces," and "super­ natural happenings." The substitution of God words for the external control terms of chance and fate implies that God control has been interpreted as a type of external control. In the neutral revision, they inserted al­ternatives for the same items, which largely exclude both the chance and fate connota­tion and the religious terminology. In the neutral version, they substitute using the words "fortune," "happenings which they can't understand," "no other forces," "pow­erful others," "providence," and "providen­tial forces."

They argued that the religious revision produced a more valid measure for religious individuals than the original scale. In the end, however, they concluded that the neu­tral version could be used universally, for either religious or general populations.

The forced­ choice format is sometimes difficult for sub­ jects. When there are two items that de­ scribe oneself equally well (or equally poorly) it can become difficult and confus­ing for the respondent. Otherwise, this paper-and-pencil measure poses no particu­lar problem. The face validity of the scored items is high. The inclusion of the six dis­tracters is an attempt to disguise the nature of the instrument.

Two samples were tested. The religious sample included 115 adults who belonged to two midwestern congregations of a Christian fundamentalist group. The general sample included 184 undergraduate students attending a state university in the same community. The two samples differed significantly in level of religiosity (p < .001), based on a brief religiosity measure. Subjects completed all three internal vs. external versions, as well as the Multidimensional Locus of Control Scales (Levenson, 1974), the Dies Projective Measure of Locus of Con­trol (Dies, 1968), and the Nowicki-Duke Locus of Control Scale (Nowicki & Duke, 1974).

No reliability information was reported.

Because the two revisions share 15 of 23 items with each other and with the orig­inal scale, it is not surprising that these three measures have high intercorrelations. The av­erage correlations between the original and religious revision was .84; between the origi­nal and the neutral revision was .90; and be­ tween the two revisions was .91. Of greater importance is the relationship between the revisions and other measures of locus of control. The average correla­tions for these relationships are listed in Table 1.

These numbers indicate moderate consis­tency with the frequently used Levenson (1974) scales. They also demonstrate a lack of correlation with the Dies (1968) and the Nowicki and Duke (1974) measures. These two measures, however, are used much less frequently and are probably not the best of standards themselves. Hence, overall, these numbers are encouraging.

The authors also included validity num­bers based on a confirmatory factor analy­sis. This analysis, however, suffered from a failure to account for the artificial correla­tions between the original and revised scales, given the high item overlap. Hence, this approach was not very useful.

The following revision of Rotter's (1966) measure of Internal vs. External Control includes eight altered items (Gabbard, Howard, & Tageson, 1986). Subjects are to select the statement with which they more strongly agree. One's score is the total number of underlined choices (i.e., external items) endorsed. The scale includes six filler items that are not scored (where neither option is underlined).
1) a. Children get into trouble because their parents punish them too much.
b. The trouble with most children nowadays is that their parents are too easy with them.
2) a.* Many of the unhappy things in people's lives are partly due to forces of spiritual powers.
b. People's misfortunes result from the mistakes they make.
3) A. One of the major reasons why we have wars is because people don't take enough interest in politics.
b. There will always be wars, no matter how hard people try to prevent them.
4) A. In the long run people get the respect they deserve in this world.
b. Unfortunately, an individual's worth often passes unrecognized no matter how hard he tries.
5) A. The idea that teachers are unfair to students is nonsense.
b. Most students don't realize the extent to which their grades are influenced by accidental happenings.
6) a.* Without God's help, one cannot be an effective leader.
b. Capable people who fail to become leaders have not taken advantage of their opportunities.
7) A. No matter how hard you try, some people just don't like you.
b. People who can't get others to like them don't understand how to get along with others.
8) A. Heredity plays the major role in determining one's personality.
B. It is one's experiences in life which determine what one is like.
9) A. I have often found that what is going to happen will happen.
b.* Trusting to spiritual assistance has never turned out as well for me as making a decision to take a definite course of action.
10) A. In the case of the well-prepared student there is rarely if ever such a thing as an un­ fair test.
b. Many times exam questions tend to be so unrelated to course work that studying is really useless.
11) a.* Becoming a success is a matter of hard work; no other powerful forces are at work.
b. Getting a good job depends mainly on being in the right place at the right time.
12) The average citizen can have an influence in government decisions.
This world is run by the few people in power, and there is not much the little guy can do about it.
13) A. When I make plans, I am almost certain that I can make them work.
b. It is not always wise to plan too far ahead because many things tum out to be a mat­ ter of good or bad fortune anyhow.
14) A. There are certain people who are just no good.
b. There is some good in everybody.
15) a.* In my case getting what I want has little or nothing to do with spiritual guidance.
b.* Many times we might just as well decide what to do by relying on powerful others.

16) a.* Who gets to be the boss often depends on who was fortunate enough or was chosen to be in the right place first.
b.* Getting people to do the right thing depends on ability; powerful spiritual forces have little or nothing to do with it.
17) As far as world affairs are concerned, most of us are the victims of forces we can neither understand nor control.
By taking an active part in political and social affairs, people can control world events.
18) a.* Most people can't realize the extent to which their lives are controlled by supernatural happenings which man can't understand.
b.* There really is no such thing as providence or fortune.
19) A. One should always be willing to admit mistakes.
b. It is usually best to cover up one's mistakes.
20) A. It is hard to know whether or not a person really likes you.
b. How many friends you have depends on how nice a person you are.
21) A. In the long run the bad things that happen to us are balanced by the good ones.
b. Most misfortunes are the result of lack of ability, ignorance, laziness, or all three.
22) A. With enough effort we can wipe out political corruption.
b. It is difficult for people to have much control over the things politicians do in office.
23) A. Sometimes I can't understand how teachers arrive at the grades they give.
b. There is a direct connection between how hard I study and the grades I get.
24) A. A good leader expects people to decide for themselves what they should do.
b. A good leader makes it clear to everybody what their jobs are.
25) Many times, I feel that I have little influence over the things that happen to me.
b.* It is impossible for me to believe that supernatural or spiritual forces play an important role in my life.
26) A. People are lonely because they don't try to be friendly.
b. There's not much use in trying too hard to please people; if they like you, they like you.
27) A. There is too much emphasis on athletics in high school.
b. Team sports are an excellent way to build character.
28) A. What happens to me is my own doing.
B. Sometimes I feel that I don't have enough control over the direction my life is taking.
29) A. Most of the time I can't understand why politicians behave the way they do.
b. In the long run the people are responsible for bad government on a national as well as on a local level.

* These items have been revised from Rotter's (1966) original scale.

Dies, R. R. (1968). Development of a projective measure of perceived locus of control. Journal of Projective Techniques and Personality Assessment, 32, 487-490.

Levenson, H. (1974). Activism and powerful others: Distinctions within the concept of internal­ external control. Journal of Personality Assessment, 38, 377-383.

Rotter, J. B. (1966). Generalized expectancies for internal versus external control of reinforce­ment. Psychological Monographs, 80 (Whole No. 609).