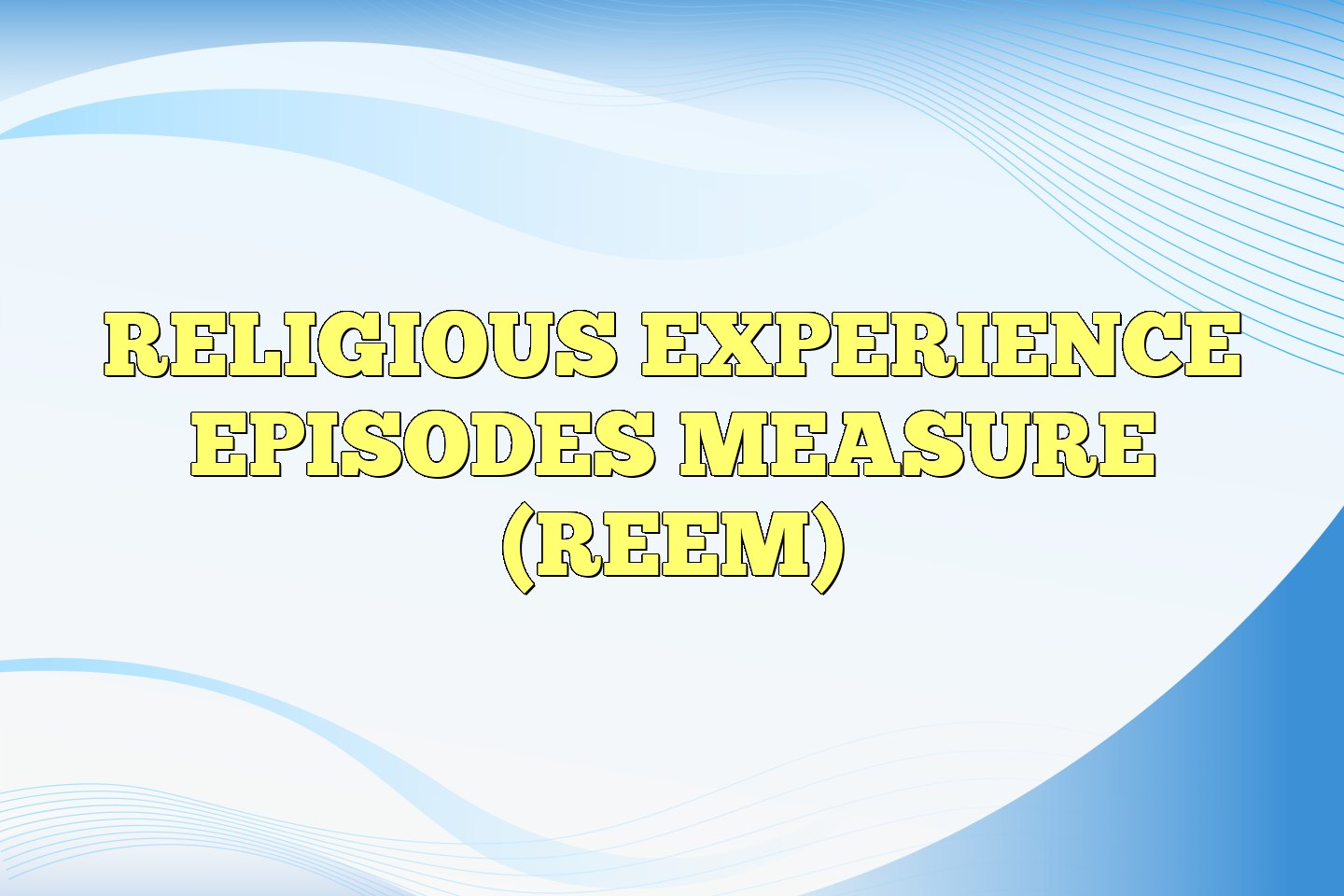 The RELIGIOUS EXPERIENCE EPISODES MEASURE (REEM), as it is self-evidently labeled, is intended as "an operational measure of the degree of reported religious ex­perience" (Hood, 1970, p. 286).

Hood (1970) constructed the REEM in order to address the empirical ne­glect of religious experience, owing in part to what he perceived to be insufficient or unduly simplistic operationalizations of the construct at the time. In order to eliminate some of the interpretational ambiguities as­ sociated with the construct among respon­dents, Hood utilized a "literary exemplar" approach in constructing the REEM. Thus, the original REEM consists of 15 first-per­ son accounts of religious experiences culled from James's (1902/1985) compilation. After reading each account, participants are asked to rate the degree to which any of their own experiences resemble the experi­ence reported in the account, from 1 "I have had absolutely no experience like this" to 5 "I have had an experience almost identical to this." Possible scores can thus range from 15 to 75.

Rosegrant (1976) reported research using a modified version of the REEM. Three changes were implemented: (a) The archaic wording present in some of the tum-of-the­ century accounts was eliminated; (b) the five most explicitly Christian-sounding ac­ counts were deleted; and (c) The 5-point re­sponse format was dropped in favor of a 9- point format.

Both Hood's (1970) and Rosegrant's (1976) versions of the REEM require little administration time, and instructions to the respondent are clear and straightforward. Scoring is also uncomplicated. One noteworthy limitation of the REEM is that its content is rather culture bound, a point that Hood himself (Hood, Spilka, Hunsberger, & Gorsuch, 1996) noted. Because it is adapted from James's (1902/1985) compilation of reli­gious experiences from available autobi­ographies, diaries, letters, etc., the content and language of the REEM bears the im­ print of North American Protestantism. In­ deed, Holm's (1982) respondents found the James-based accounts of religious experi­ences presented in a literal Swedish transla­tion of the REEM to be rather confusing, forcing Holm to construct a culture-specific version of the REEM based, in part, upon the Nordic experiential literature. Thus, ad­ ministration of either the original or the shortened REEM outside of a religiously committed North American Christian sam­ple may be ill-advised.

Hood (1970) re­ ported a mean of 31.5 for the 15-item REEM among his original sample of 51 psychology undergraduates at South Dakota State University; he suggested that this av­erage might be somewhat higher than that for the general population, owing to the rural, religious background of many of the respondents. Rosegrant's (1976) sample of 91 participants in an outdoor program in North Carolina yielded an item mean of 3.4 (9-point response format).

Hood (1970) reported a 2-week test-retest reliability coefficient of .93 for the original REEM. Internal consistency (Kuder-Richardson formula) was .84. Rosegrant (1976) reported a Cronbach's alpha of .73. Thus, both the original and shortened versions of the REEM appear sufficiently reliable for research purposes.

Both in the original and in a subse­quent study, Hood (1970; 1978b) found REEM scores to be moderately positively correlated with intrinsic, and uncorrelated with extrinsic, religious orientation, as mea­sured by the Allport and Ross (1967) scales. Holm (1982) reported that the Christian­ based items of his Swedish adaptation of the REEM were related to the religious/noetic subscale of Hood's (1975) Mysticism Scale, whereas the non-Christian-based items were related to the general/phenomenological subscale. Moreover, Hood (1978a) found the REEM sufficiently sensitive to shifts in reported religious experience to function as a dependent variable in a quasi-experimen­tal investigation of the effects of stress and expectancy on religious experience in a na­ture setting. Thus there appears to be rea­ sonable evidence for the REEM scale's con­ struct validity.

think that your experience was moving and powerful in the same way as the experience that the person was trying to describe.

Below each description are numbers running from 1 to 9. Please circle one number for each experience; the higher the number, the more similar it is to your experience.

Once, a few weeks after I came to the woods, I thought that perhaps it was necessary to be near other people for a happy and healthy life. To be alone was somewhat unpleasant. But during a gentle rain, while I had these thoughts, I was suddenly aware of such a good society in nature, in the pattern of the drops and in every sight and sound around my house, that the fancy advantages of being near people seemed insignificant, and I haven't thought about them since. Every little pine needle expanded with sympathy and befriended me. I was so definitely aware of something akin to me that I thought no place could ever be strange to me again.

My mind, deeply under the influence of the thoughts and emotions called up by the read­ing and talk, was calm and peaceful. I was in a state of quiet, almost passive enjoyment, not actually thinking but letting thoughts and emotions flow by themselves through my mind. All at once, without any warning, I found myself wrapped in a flamecolored cloud. For an in­ stant I thought a great fire might be in the nearby city; the next moment I knew that the fire was within myself. Directly afterward I felt a sense of exultation, of immense joy and intel­ lectualinsight impossible to describe.

I have several times felt that I have enjoyed a period of communion with the divine. These meetings are unexpected but clear, and consist of the disappearance of the conventionalities that fill my life. Once it happened when from the top of a high mountain I looked over a rugged landscape extending to a long curve of ocean which reached the horizon. Another time it happened when from the same point I could see nothing beneath me but an endless expanse of white cloud. Above the windblown clouds a few high peaks, including the one I was on, seemed to be plunging about as if they were dragging their anchors. On these occa­ sions I felt a temporary loss of my identity, and I realized that life was more significant than I had thought.

My thoughts went back to what they had been busy with for three years-the search for God. I wondered how I had ever come by the idea of God. And with this thought a glad de­ sire for life arose in me. Everything in me became meaningful. I realized that I did not have to look farther. To acknowledge God and to live are one and the same thing. God is what life is.

I would suddenly feel the mood coming when I was at church, or with people, or reading, but only when my muscles were relaxed. It would irresistibly take over my mind and will, last what seemed like forever, and disappear in a way that resembled waking up from anes­thesia. One reason that I disliked this kind of trance was that I could not describe it to my­ self; even now I can't find the right words. It involved the disappearance of space, time, feel­ ing, and all the things that I call my self. As ordinary consciousness disappeared, the sense of underlying or essential consciousness grew stronger. At last nothing remained but a pure, ab­ solute, abstract self.

I remember the night and almost every spot on the hilltop where my soul opened out and the inner and outer worlds rushed together. My own deep struggle was being answered by the unfathomable deep without, reaching beyond the stars. I stood alone with him who had made me, and all the beauty, love, and sorrow of the world. I felt the union of my spirit with his. The ordinary sense of things around me faded, and for the moment nothing remained but an indescribable joy.

I felt something within me had broken on which my life had always rested, that I had nothing to hold on to, and that my life no longer had meaning. I felt forced to commit sui­ cide. It wouldn't exactly be right to say I wished to kill myself, because the force which drew me away from life was more powerful and more general than any mere wish. It was a force like my old desire to live, but it moved me in the opposite direction. I was driven to die, and in spite of that I still hoped for something from life.

God is more real to me than any thought or thing or person. I feel God's presence and I feel it more as I live in closer harmony with his laws. I feel God in the sunshine or rain, and my feelings are best described as awe mixed with delirious restfulness.

The highest experiences I have had of the presence of God have been rare and brief­ flashes of consciousness which have made me exclaim with surprise, or less intense mo­ ments of happiness and insight, only gradually passing away. I have severely questioned whether these moments were worthwhile, but I find that after every questioning, they stand out today as the most real experiences of my life.

I have never had such an immediate, powerful experience. I don't know what it was in that flower, what shape or secret, that made me see it in a limitless beauty. I will never en­ close in a conception this power, this indescribable greatness, this uncontainable form, this ideal of a better world, which I felt but which nature has not made actual.

Both Hood (1970) and Rosegrant (1976) give descriptions and sample items from the original and revised versions of the REEM, although neither source repro­ duces a scale version in its entirety. Inter­ested readers are instead instructed to con­tact the respective authors for versions of the scale.

Recent Research: In addition to studies that have direct implications on the scale's va­lidity, versions of the REEM have been used to investigate the relationship between re­ ported religious experience and both hyp­notic susceptibility (Hood, 1973) and psy­chological adjustment (Hood, 1974), and to differentiate among individuals whose re­ port or denial of religious experiences is ei­ther false or genuine (Hood, 1978b). Never­ the less, the REEM scale in its various forms has been underutilized in empirical research relative to Hood's (1975) Mysticism Scale. This underuse may be attributable, in part, to Hood's (e.g., 1978a, 1978b) and others' (e.g., Holm, 1982) equating what the REEM measures with "mysticism." To the extent that this is true, then the Mysticism Scale (also in this volume) is probably the more adaptable and informative of the two mea­ sures.

Hood, R. W., Jr. (1974). Psychological strength and the report of intense religious experience. Journal for the Scientific Study of Religion, 13, 65-71.

Hood, R. W., Jr. (l 975). The construction and preliminary validation of a measure of reported mystical experience. Journal for the Scientific Study of Religion, 14, 29-41.

Hood, R. W., Jr. (1978b). The usefulness of the indiscriminately pro and anti categories of religious orientation. Journal for the Scientific Study of Reli­gion, 17, 419-431.