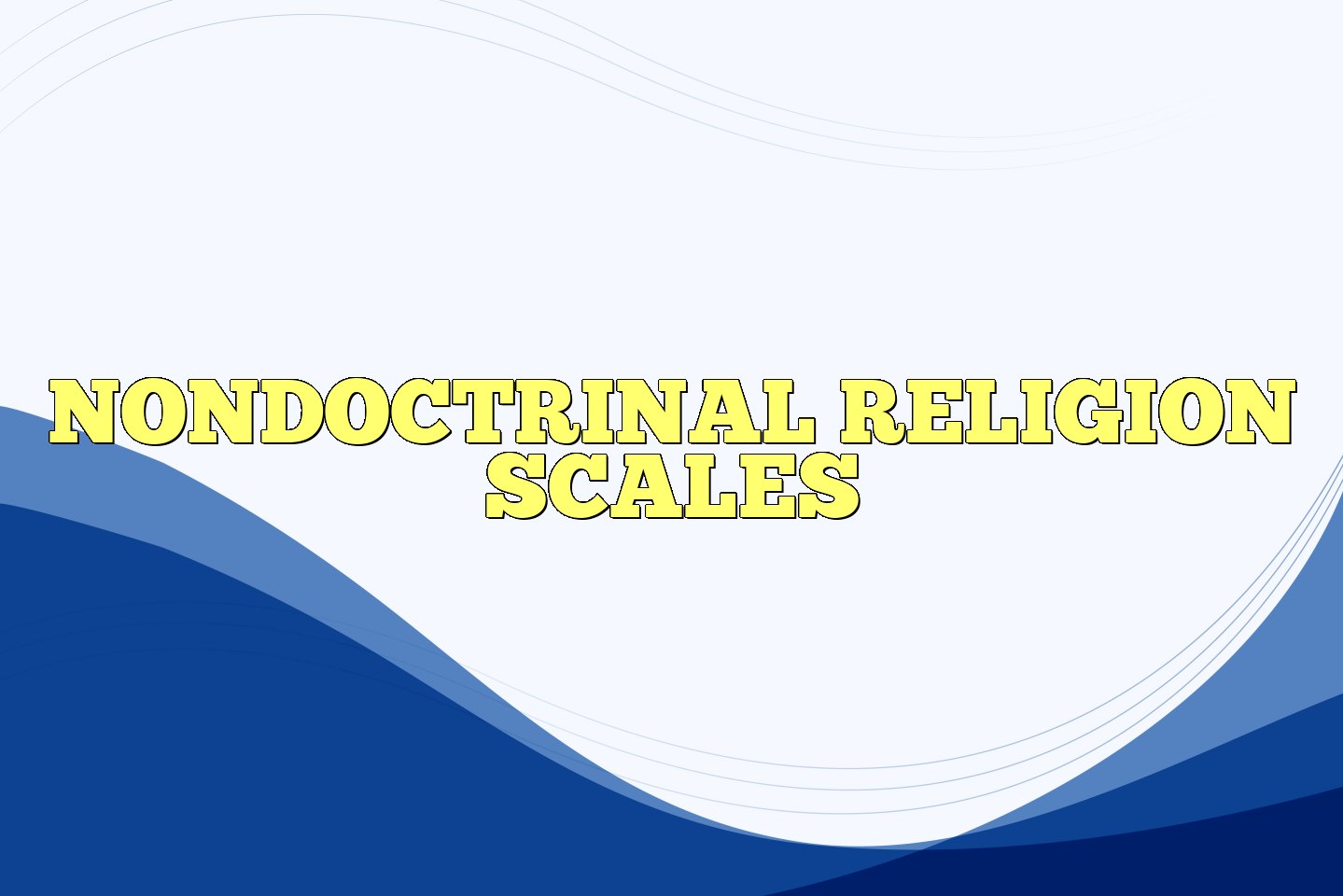 The Nondoctrinal Religion Scales are designed to measure cross-cultural, non­ doctrinal aspects of religion regarding ulti­ mate concerns of universal human interest, such as questions of meaninglessness, suf­fering, and injustice. The 1969 scale con­tains 7 items; the 1977 scale contains 20 items.

The nondoctrinal religious measure cre­ated by Yinger (1969) was rooted in an as­ sumption that interest in existential questions is a structural foundation for much belief and behavior that is not traditionally defined as "religious," as well as for all religious belief and behavior. Yinger (1969, p. 90) described these as the "ephemeral, the emergent, the poorly institutionalized expressions of ulti­ mate concern." Although he cites the writ­ ings of Clifford Geertz as an influence on his thinking, Yinger unfortunately was rather vague in both papers concerning the basis on which he created and selected his particular questions, or how "years of research" (Yinger, I 977, p. 68) led him to hypothesize suffering, meaning, and injustice to be hu­manity's most essential issues.

The 1969 scale consists of seven statements to be rated on a Likert­ type scale with respect to agreement-dis­ agreement. For each question he identified certain responses (either agreement or dis­ agreement, depending on the wording of the item) as "religious" responses. Yinger (1969) did not advocate summing the items to form a scale (although subsequent re­ searchers attempted to do so; see "Reliabil­ ity" and "Validity" below) but simply pre­ sented tabular data for each question separately.

In addition, Yinger (1969) asked respon­dents to write answers to four open-ended questions regarding their idea of the "most important issue" for humanity, the responses to which he classified "informally" into such categories as major social issues (e.g., peace, poverty); interpersonal relations; individual creativity and happiness; and meaning, pur­ pose, and relationship of humans to God. Be­ cause these items do not represent a "scale" per se, we do not include them here.

Yinger's approach to the subject in 1977 included soliciting more respondents and sampling from a variety of cultures by translating the scale into several other lan­guages (including Japanese, Korean, and Thai). The 20-item measure presented in 1977 was designed specifically to measure respondents' concerns about (1) worldwide human suffering, (2) injustice, and (3) meaninglessness. In addition, he included separate sets of items concerned respec­tively with (4) "religion generally" and (5) politics. Respondents rated their agreement with each statement on a 5-point scale. However, .despite his conceptual grouping of the items into these five categories, Yinger again analyzed the data separately by item instead of summing items to create composite scale scores. In his large sample of international students he examined the degree to which responses to individual questions varied as a function of national citizenship, religious identity, and sex.

Practical Considerations: Both the 7-item 1969 scale and the 20-item 1977 scale are easy to administer. Each item is rated on a 5 point Likert-type scale ranging from fully agree to fully disagree. Yinger (1969, p. 93) emphasized that respondents "were given a minimum of instructions" and that the term "religion" was avoided in the introduction to the scale in order to minimize potential biases on the part of responses. As Yinger did not discuss any procedures for combin­ ing items into total or subscale scores, no further scoring is necessary.

Preparation of this review was facilitated by a Charles Center Research Fellowship to Caro Courtenay and a Summer Re­ search Grant to Lee Kirkpatrick from the College of William & Mary.

Yinger (1969) pre­ sented frequencies of responses to each of the seven items separately for two samples: a "pretest" sample of 96 students from an unspecified college and a larger sample of I ,325 students drawn from IO different col­ leges. In total, 69% of all responses were classified as "religious" when scored in the manner described above.

The 1977 analysis was based primarily on responses from 751 college students from Korea, Japan, Thailand, New Zealand, and Australia, although some analyses included 124 additional respondents from II dif­ferent countries and/or (b) 151 U.S. students from an unspecified earlier sample. Samples were drawn from a variety of academic courses, but some courses were overrepre­sented and the data from the non-American students were obtained while they were in residence at an American research center, so in several ways the samples cannot be gener­alized to any well-defined population. Again, simple raw frequencies were presented for each of the questions separately.

Because Yinger never suggested that the seven items on the 1969 scale should be summed to create a single or total scale, he did not report any measure of in­ ternal consistency reliability. However, Nelsen, Everett, Mader, and Hamby (1976) examined the items from this perspective and reported poor internal consistency: an alpha coefficient of only .34 and interitem correlations ranging from .19 to .28. Their factor analysis suggested the presence of two factors, which they referred to as "acceptance of belief and order" and "accep­tance of the value of suffering." However, the internal consistency reliabilities of these scales were also poor (alphas= .45 and .37, respectively). Roof, Hadaway, Hewitt, McGaw, and Morse (1977) replicated the finding of poor internal consistency for the 7-item scale, and found three factors in a factor analysis ("value of religious efforts," "value of difficult experience," and "the basic human condition").

In short, there seems to be little basis for summing the 1969 items into total or sub­ scale scores, although it should be noted that both the Nelsen et al. (1976) and Roof et al. (1977) studies employed relatively small samples for psychometric purposes (ns = 217 and 113, respectively). No other measures of reliability of the scale have been reported, and no reliability data of any kind have been published for the 1977 scale.

The factor analyses reported by Nelsen et al. (1976) and Roof et al. (1977) suggest that the 1969 items are multidimensional and do not well represent a unitary dimension of any kind; however, there is lit­ tle agreement between these two sets of re­sults in terms of what the scales do measure. In both cases, however, the authors con­ cluded that the "nondoctrinal" measures were significantly correlated with tradi­tional religiosity (e.g., orthodoxy, prayer, and "self-rated religiosity"), and therefore questioned the degree to which Yinger's measures tap anything distinct from more conventional definitions of religiousness.

Based on a factor analysis of the 1977 scale, Brown (1981) raised several ques­ tions about the factor structure and validity of the items. However, these results are of little value given his very small sample (n = 80) and inclusion of nine additional funda­ mentalism items in the analysis.

Please use the following scale to indicate the extent to which you agree with each item below.