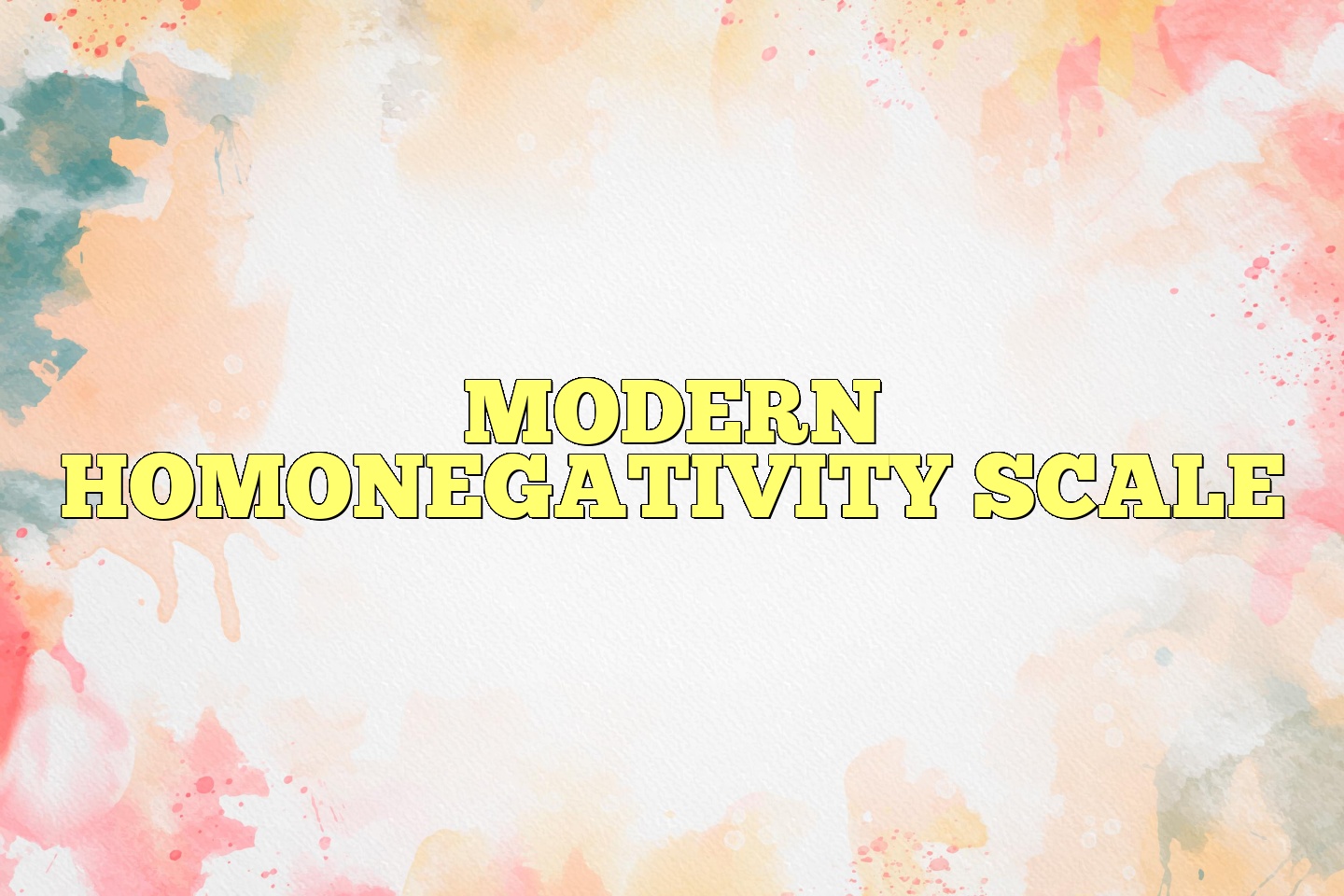 MELANIE A. MORRISON1 AND TODD G. MORRISON, University of Saskatchewan

The Modern Homonegativity Scale (MHS; M. A. Morrison & Morrison, 2002) is a brief measure designed to assess contemporary negative attitudes toward gay men and lesbian women. Unlike many measures of homonegativity, items on the MHS do not assess traditional, moral, or religious objections to lesbian women and gay men, but rather objections to members of these social groups based on the following beliefs: (a) gay men and lesbian women are making unnecessary or illegitimate demands for changes to the status quo (e.g., the right to legally wed and to parent an adopted child), (b) discrimination against homosexual men and women is a thing of the past, and (c) gay men and lesbian women exaggerate the importance of their sexual orientation and, in so doing, prevent themselves from assimilating into mainstream culture (i.e., they are responsible for their own marginalization given their participation in events such as “Gay Pride” parades).

The MHS is suitable for use both with students (M. A. Morrison & Morrison, 2002; M. A. Morrison, Morrison, & Franklin, 2009; T. G. Morrison, Kenny, & Harrington, 2005) and with nonstudents (M. A. Morrison & Morrison, 2009). The items were originally developed via input from members of organizations serving sexual minority men and women, members of academic faculty, and gay, lesbian, and heterosexual graduate students. The 50-item version of the MHS was then distributed to both university and college students. Using specific scale item reduction criteria, principal components analysis, and reliability assessments, the number of items was ultimately reduced to a 12-item version (M. A. Morrison & Morrison, 2002). Factor analyses were conducted on the 12-item MHS, with results indicating that the scale was both unidimensional and conceptually distinct from measures of “old- fashioned” homonegativity (e.g., the Homonegativity Scale; T. G. Morrison, Parriag, & Morrison, 1999). There are two parallel forms of the MHS: one focusing on gay men (MHS-G) and the other focusing on lesbian women (MHS-L). Results from M. A. Morrison and Morrison (2002) indicate that both 12-item forms are reliable (alphas exceeded .90), unidimensional, and construct valid (total scale scores correlated in anticipated directions with con- structs that are theoretically linked such as modern racism and modern sexism).

Total scale scores are calculated by summing participants’ responses across all MHS items. If researchers are using a 5-point Likert response format, for example, the possible range of scores is 12 (a low-scoring participant) to 60 (a high-scoring participant). It should be noted that three scale items require reverse scoring, and calculation of subscale or factor scores are not applicable to the MHS.

Construct validation of the MHS when used with Canadian and American university students has been obtained via confirmation of hypothesized relationships between mod- ern homonegativity and political conservatism, religious behavior, religious self-schema, modern and neosexism, humanitarian-egalitarianism, motivation to control prejudiced reactions, interpersonal contact, anti-fat attitudes, and prejudice toward Aboriginal men and women (M. A. Morrison & Morrison, 2002; M. A. Morrison et al., 2009; M. A. Morrison, Morrison, Harriman, & Jewell, 2008). Further, responses to the MHS do not appear to be contaminated by social desirability bias (M. A. Morrison & Morrison, 2002). Tests of construct validation also were conducted using a sample of Irish university students. Specifically, T. G. Morrison et al. (2005) found participants’ level of modern homonegativity correlated positively with their levels of old-fashioned and modern racism, patriotism, nationalism, religious fundamentalism, social dominance, and perceived political conservatism. The authors also found inverse correlations between scores on the MHS and support for the human rights of gay men and lesbian women. A series of confirmatory factor analyses also pro- vided evidence of divergent validity, with MHS items load- ing on a different factor than items taken from a popular measure of old-fashioned homonegativity (M. A. Morrison et al., 2009). Fit statistics for this two-factor model were superior to those obtained for a unidimensional model. Finally, behavioral studies (M. A. Morrison & Morrison, 2002, 2009) offered additional construct validation, with significant differences emerging between high- and low- scoring participants on the MHS in terms of the degree to which they socially distanced themselves from a lesbian or gay individual and supported the candidacy of a gay male running for political office.

The MHS is available for use by any individual conducting research in accordance with the American Psychological Association’s Ethical Principles for Psychologists. Individuals wishing to use the MHS can do so without obtaining permission from the authors.‌