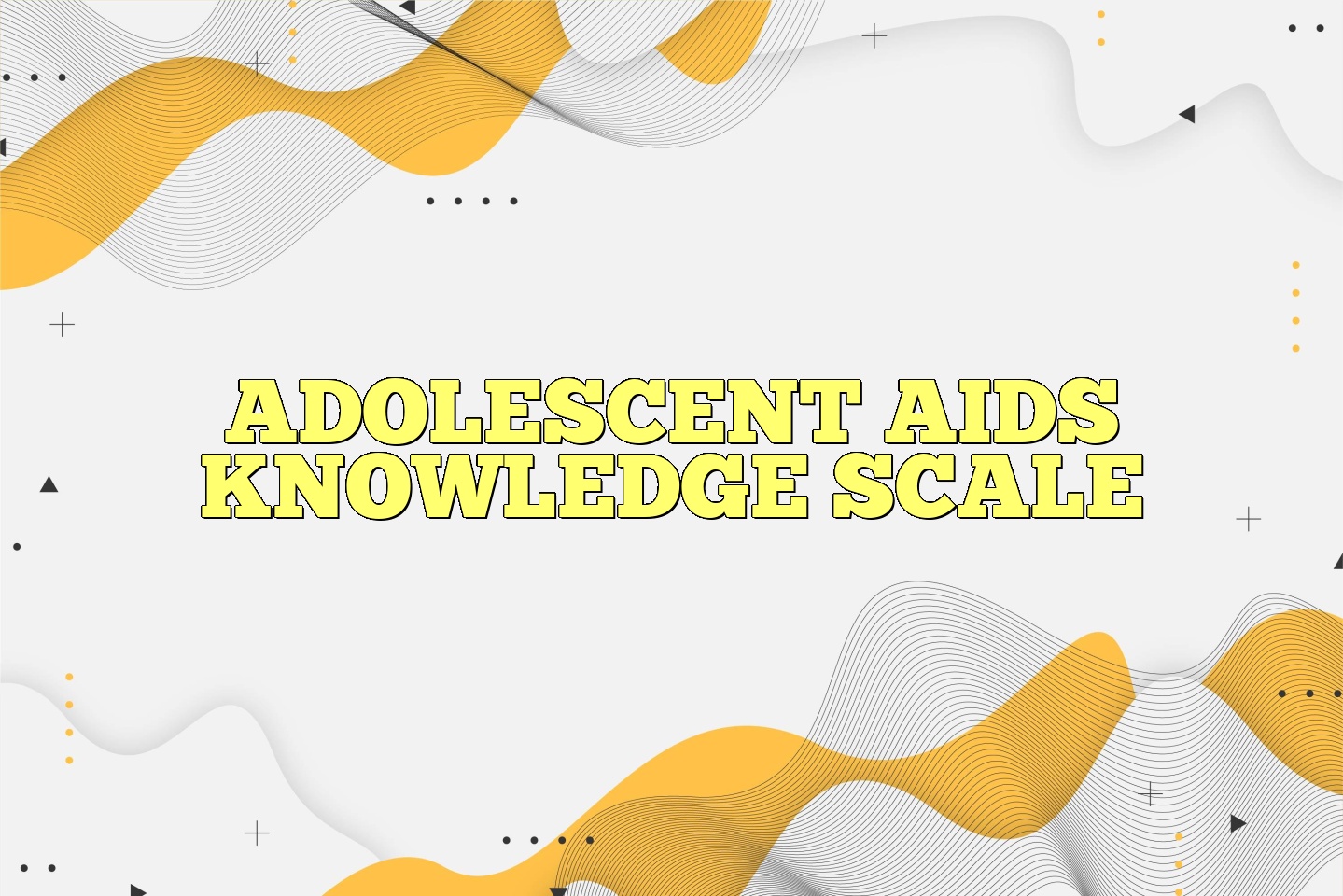 The Adolescent AIDS Knowledge Scale (AAKS) was developed as part of a comprehensive questionnaire to evaluate adolescents’ knowledge, beliefs, and attitudes about acquired immunodeficiency syndrome (AIDS; Zimet et al., 1989). The knowledge scale was developed with two principal issues in mind. First, we wanted to ensure that the scale covered relevant material. To accomplish this goal, item content was derived from a 1988 informational brochure distributed to every household by the

U.S. Government (Centers for Disease Control, 1988). As a result, the scale addresses multiple AIDS-related domains, including modes of transmission, high-risk behaviors, mortality, the existence of a cure, prevention of transmission, and the appearance of persons with AIDS (PWAs).

A second issue considered during scale development was that most existing AIDS knowledge scales confounded knowledge (i.e., awareness of scientific facts about AIDS) with beliefs. It seemed likely that a person might “know” the facts according to experts, but not believe them. In considering the design of AIDS education interventions, it appeared particularly important to assess AIDS aware- ness/knowledge separately from AIDS beliefs. To address this issue, each item on the AAKS was constructed to begin with the phrase “Do most experts say . . .?” A separate but parallel AIDS Beliefs scale was developed to evaluate the extent to which adolescents believed what experts were saying.

The AAKS has 22 items. Each item takes the form of a question (e.g., “Do most experts say you can get AIDS by giving blood?”). Transmission-related items cover true modes of transmission (e.g., sharing needles), low- or no-risk behaviors (e.g., sharing a glass of water), behaviors that increase risk of transmission (e.g., prostitution), and transmission of human immunodeficiency virus (HIV) without clinical AIDS. Two protection items address effective (i.e., condom use) and ineffective (i.e., eating healthy foods) protective behaviors. Finally, single items cover such topics as the mortality associated with AIDS, whether there is a cure for AIDS, and whether it is possible to determine if someone has AIDS by looking at him or her.

To each question, respondents are asked to circle yes, no, or don’t know. Response times vary, but typically the scale requires less than 5 minutes to complete.

An AIDS-knowledge scale such as this one represents multiple content areas, not a single construct. Therefore, standard measures of internal reliability that assess overall internal consistency (e.g., Cronbach’s coefficient alpha or Kuder-Richardson formula 20) are inappropriate (Anastasi, 1982; Zimet, 1992b). A more useful approach involves a specialized form of Spearman-Brown split-half reliability in which items from one half are matched for content with items from the other half (Zimet, 1992b). Given that the AAKS was not designed with this approach to reliability in mind, it is not possible to match all items perfectly (e.g., only one item addresses mortality associated with AIDS). Nonetheless, in a sample of 721 junior and senior high school students, the Spearman-Brown matched-item split- half method resulted in a coefficient of .82, indicating good internal reliability (Zimet, 1992b).

The content validity of the scale was established through the use of the U.S. government brochure on AIDS to guide item selection (Centers for Disease Control, 1988). Furthermore, in addressing major AIDS-related domains (i.e., HIV transmission, protection, mortality, appearance, etc.), the scale demonstrates good face validity.

Support for the construct validity of the AAKS is demonstrated by expected relationships with other variables. For example, it may be expected that older students have more accurate knowledge about AIDS than younger students. For the AAKS, analysis of variance indicated a linear increase in scores across grade level among 617 7th to 12th graders, F(5, 611) = 8.8, p < .0001 (Zimet, DiClemente, et al., 1993).

Instructions: Experts on AIDS have talked about the spread and prevention of AIDS. Please circle your answer for each question.

Centers for Disease Control. (1988). Understanding AIDS [An information brochure being mailed to all U.S. households]. Morbidity and Mortality Weekly Report, 37, 261–269.