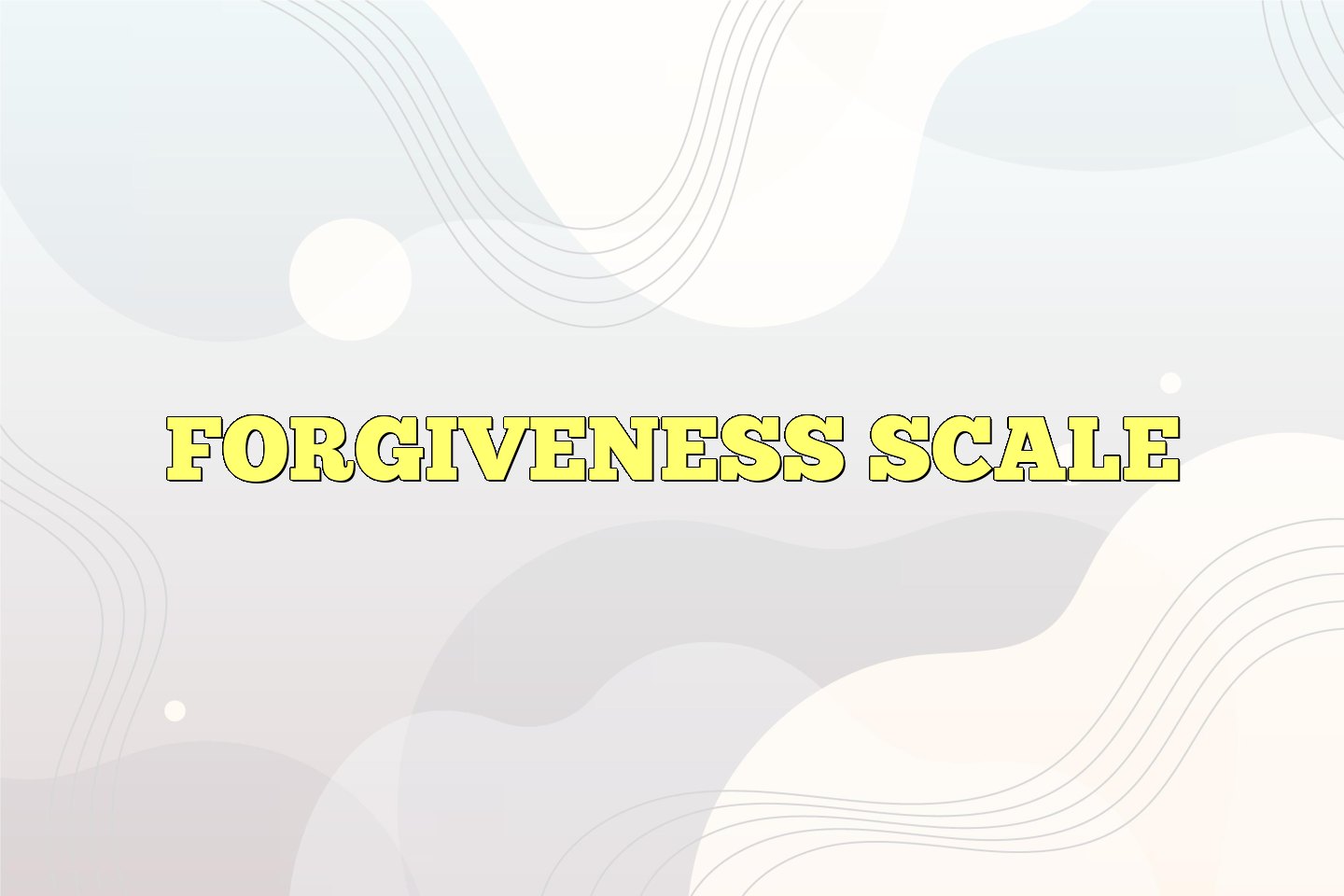 Wade's Forgiveness Scale was de­veloped to measure the degree to which re­spondent's have forgiven a specific person who has hurt them (offender). The Forgive­ ness Scale measures cognitions, affects, and behaviors regarding the offender. Forgive­ ness is conceptualized as a multidimen­sional construct and is measured with sev­eral different subscales.

From this item pool, Wade (1989) pro­duced an 83-item scale with nine intercorre­lated subscales. The subscales are: Revenge, Freedom from Obsession, Affirmation, Victimization, Positive (vs. Negative) Feelings, Avoidance, Toward God, Conciliation, and Holding a Grudge. The items are responded to on a 5-point scale ( I = strongly disagree, 2 = disagree, 3 = neutral, 4 = agree, and 5 = strongly agree). Items for each subscale can be summed to derive nine distinct measures of forgiveness. Scores range from as low as 4 to 20 for the Freedom from Obsession and Holding a Grudge Scales (which both con­tain four items) and as high as 26 to 104 for the Feelings subscale (26 items). Higher scores on the Revenge, Victimization, Avoidance, Freedom from Obsession, Affirmation, Positive (vs. Negative) Feelings, Toward God, and Conciliation subscales in­dicate greater forgiveness. Subscales are de­ signed to measure specific components of how people respond following serious inter­ personal hurts (e.g., desire for revenge, avoidance, feelings, conciliation, etc.) and would be of interest to researchers inter­ested in these components.

This paper-and­ pencil measures requires no special skill to administer. The measure is scored by sum­ming the items for each respective subscale to derive nine subscale scores. The one ex­ception, the Feelings subscale, requires that items measuring negative feelings (e.g., be­ trayed, anger, and hatred) be reversed (a score of I is reversed to 5, a score of 2 is reversed to 4, and so on) before they are summed with the items measuring positive feelings.

Normative data on Wade's scale has yet to be collected. The scale was developed using a sample of 282 college students, half of whom endorsed the items with a person whom they had not for­ given in mind. Means and standard devia­tions for their samples of church members, college students who desired to participate in a workshop to help them learn to forgive, and spouses, respectively. These might serve as tentative norms for their respective samples.

Wade (1989), McCullough and Worthington (1995), and Woodman (1991) have estimated the internal consistency reli­ability of Wade's scales with Cronbach's co­ efficient alpha. (See table 1). All of the items correlated with their parent subscale at a minimum of r = .50 (Wade, 1989). No studies to date have investigated the stabil­ity of scores over time.

A form of the "known groups" method was used to establish concurrent va­lidity in Wade's (1989) study. The items were completed by 282 college students.

All of the subscales except for the To­ ward God subscale show moderate correla­tions with the four subscales of Spanier's (1976) Dyadic Adjustment Scale in a sam­ple of married persons (Woodman, 1989). The subscales are modestly correlated with Christian religious maturity as measured by Massey's (1989) Religious Status Inventory (Dreelin, 1992), and narcissistic traits, as measured by the Narcissistic Personality In­ventory (Davidson & Jurkovic, 1992).

Additional support for the instrument's validity comes from data suggesting that Wade's scales may be useful in measuring the efficacy of interventions designed to promote forgiveness. McCullough and Wor­thington (1995) used by Wade's scales to measure the effectiveness of two different one-hour psychoeducational workshops at encouraging college students to forgive per­ sons who had offended them. They found that participation in the two workshops pro­duced changes in the direction of forgive­ ness on the Revenge, Affirmation, Feelings, and Conciliation subscales of Wade's instru­ment.

Please answer the items below by using the following scale:

R Item must be reverse scored

Note: Do not include codes in parentheses in administration of this scale. Reprinted with permission of author.

Spanier, G. B. (1976). Measuring dyadic adjust­ment: New scales for assessing the quality of mar­riage and similar dyads. Journal of Marriage and Family, 38, 15-28.