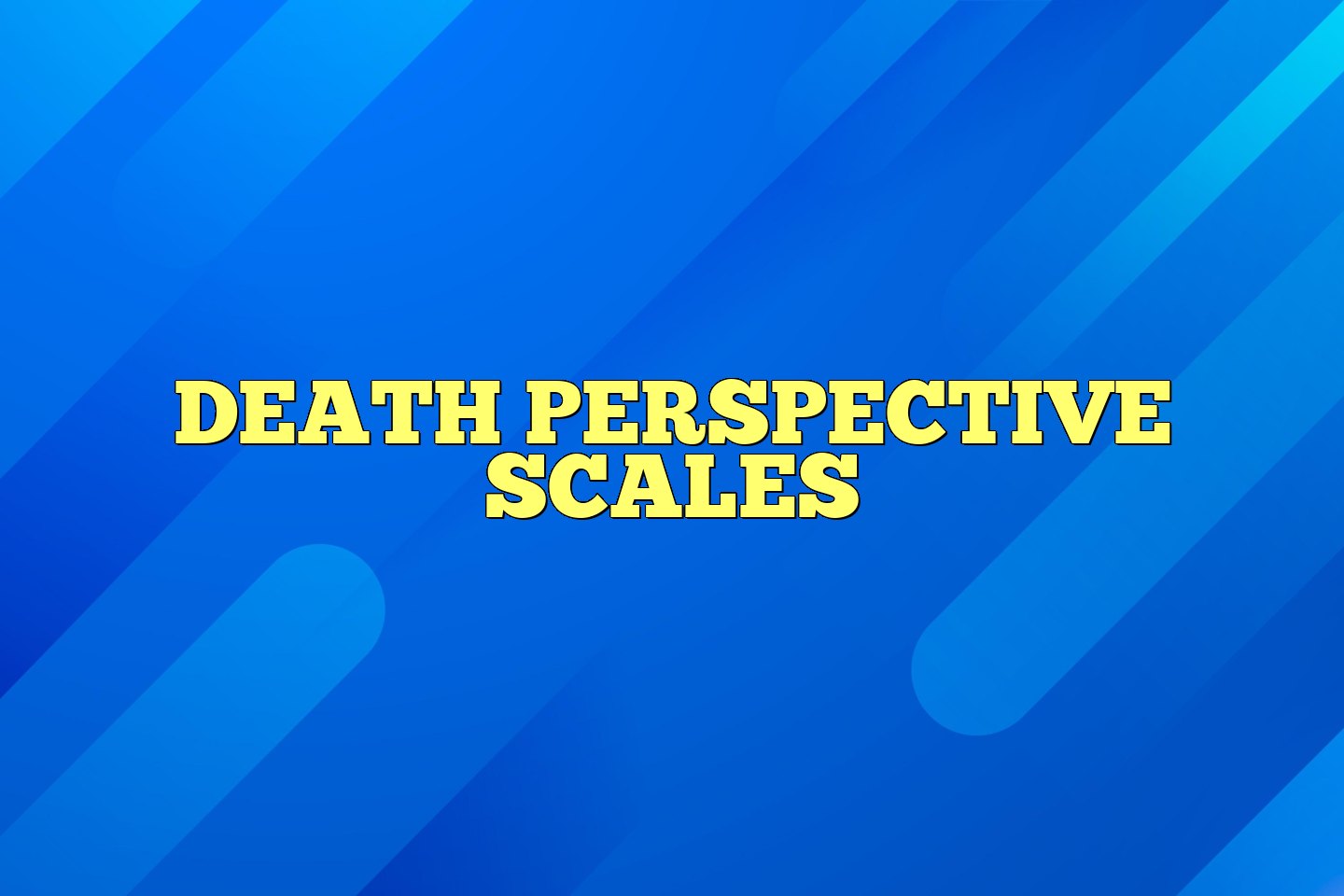 The Death Perspective Scales de­veloped by Spilka et al. (1977) are intended to measure the true multidimensional nature of people's feelings about death, as opposed to the usual focus on anxiety and fear. Eight subscales are proposed to measure different aspects of people's reactions to death: Death as Pain and Loneliness, Death as an After­ life of Reward, Indifference toward Death, Death as Unknown, Death as Forsaking Dependents, Death as Courage, Death as Fail­ure, and Death as a Natural End. An examination of the items included in these scales suggest that what they are primarily measur­ing is different emotional reactions to the idea of death, especially one's own. These scales are based on the general theoretical idea that both religion and death are multi­ dimensional domains and that different as­pects of religion are related to different as­pects of death.

The death perspective scales presented in Spilka et al. (1977) are a devel­opment of earlier scales (Hooper & Spilka, 1970; Minton & Spilka, 1976) that had demonstrated construct validity but had pos­sessed poor psychometric properties and were difficult to administer. There are eight scales, varying from four to six items in length, measuring each of the constructs listed above. Each item completes the phrase "Death as ... ", to which subjects are to respond on a 6-point Likert scale.

A search of articles listed in Social Sci­ence Citation Index as referencing the Spilka et al. (1977) article showed that it is widely cited for its theory and findings but the scales developed have not been widely used in the published literature.

No elaborate in­structions are required for the use of these scales. There are a total of 43 items, mean­ing that subjects should be able to complete the scales in a relatively brief period of time and that it is possible to incorporate these items into a longer instrument. The lan­guage used in the scales should be compre­hensible to the average college student, but some of the wording might confuse poorly educated or younger people with less exten­sive vocabularies.

Based on 180 items from Hooper and Spilka (1970), Spilka et al. (1977) developed a pool of 60 items, 6 each to measure IO theoretical death perspectives: natural end, pain, loneli­ness, unknown, punishment, forsaking de­pendents, failure, afterlife of reward, courage, and indifference. A total of 328 subjects completed these items. All partici­pants were Christian; most were college stu­ dents, but 74 were members of a Methodist church in Boise, Idaho. Based on the results of principal components factor analysis, an eight-factor structure was identified. Items to measure each factor were selected on the basis of the factor loadings. Items intended to measure death as punishment did not form a separate factor, and items intended to measure death as pain and death as loneli­ness loaded on one common factor

Spilka et al. (1977) found varying levels of independence in the death perspec­tives scales. Of their 28 intercorrelations, 13 fell below .2 and 7 fell above .4.

In addition to the death perspectives scales, Spilka et al. had subjects who were personally involved in religion (who had regular church attendance and said that reli­gion was important in their lives) complete the Allport and Ross (1967) Intrinsic-Ex­trinsic Scales and the Consensual-Commit­ ted Scales (Allen & Spilka, 1967). The In­trinsic and Committed Scales correlated positively with "the more favorable" (Spilka et al., 1977, 175) death perspectives, such as afterlife of reward and courage, whereas the negative perspectives (e.g., indifference, loneliness and pain, failure) were associated with the Extrinsic and Consensual Scales.

Along similar lines, Schoenrade (1989) used the death perspectives scales in an experiment investigating how afterlife beliefs are affected by being confronted with one's own mortality. Subjects, categorized as high or low in belief in an afterlife, com­pleted the scales either before or after being confronted with an audiotape describing the events of the subject's own untimely death. Schoenrade submitted the scale scores to a principal axes factor analysis, which re­sulted in a three-factor structure: negative (pain and loneliness, unknown, forsaking dependents, failure), positive (reward, courage), and neutral (natural end). The in­ difference scale did not load highly on any of these factors. Regression factor scores were computed for each factor. Positive death perspective scores were highest for high belief in afterlife subjects who had previously been confronted with their own mortality; negative death perspective scores were highest for low belief in afterlife sub­ jects who had not been so confronted. These differences would seem to be theo­retically consistent with the above findings of Spilka et al. (1977) relating to religious orientation. Neutral scores did not differ across groups.

Spilka, Spangler, Rea, and Nelson (1981) had 273 clergy from 11 different Christian denominations complete the Pain and Lone­liness, Forsaking Dependents, Unknown, and Afterlife as Reward Scales as part of a study of the clergy's perspectives on and experiences with terminally ill patients and their families. While their reporting of the results for these scales was customized to be appropriate for the journal in which the re­ search appeared and therefore lacks the de­ tail a researcher might wish, they did report that of these scales their clergy sample tended to emphasize the view of death as af­terlife of reward, although "even this orien­tation was not held very strongly" (p. 304).

Responses should be made on a 6-point Likert scale (1 = strongly disagree, 6 = strongly agree).

Scale l: Death as Pain and Loneliness Death as ...

Scale 2: Death as an Afterlife of Reward Death as ...

Scale 3: Indifference toward Death Death as ...

Scale 5: Death as Forsaking Dependents Plus Guilt Death as ...

Allen, R. 0., & Spilka, B. (1967). Committed and consensual religions: A specification of religion-prejudice relationships. Journal for the Scien­tific Study of Religion, 6, 191-206.