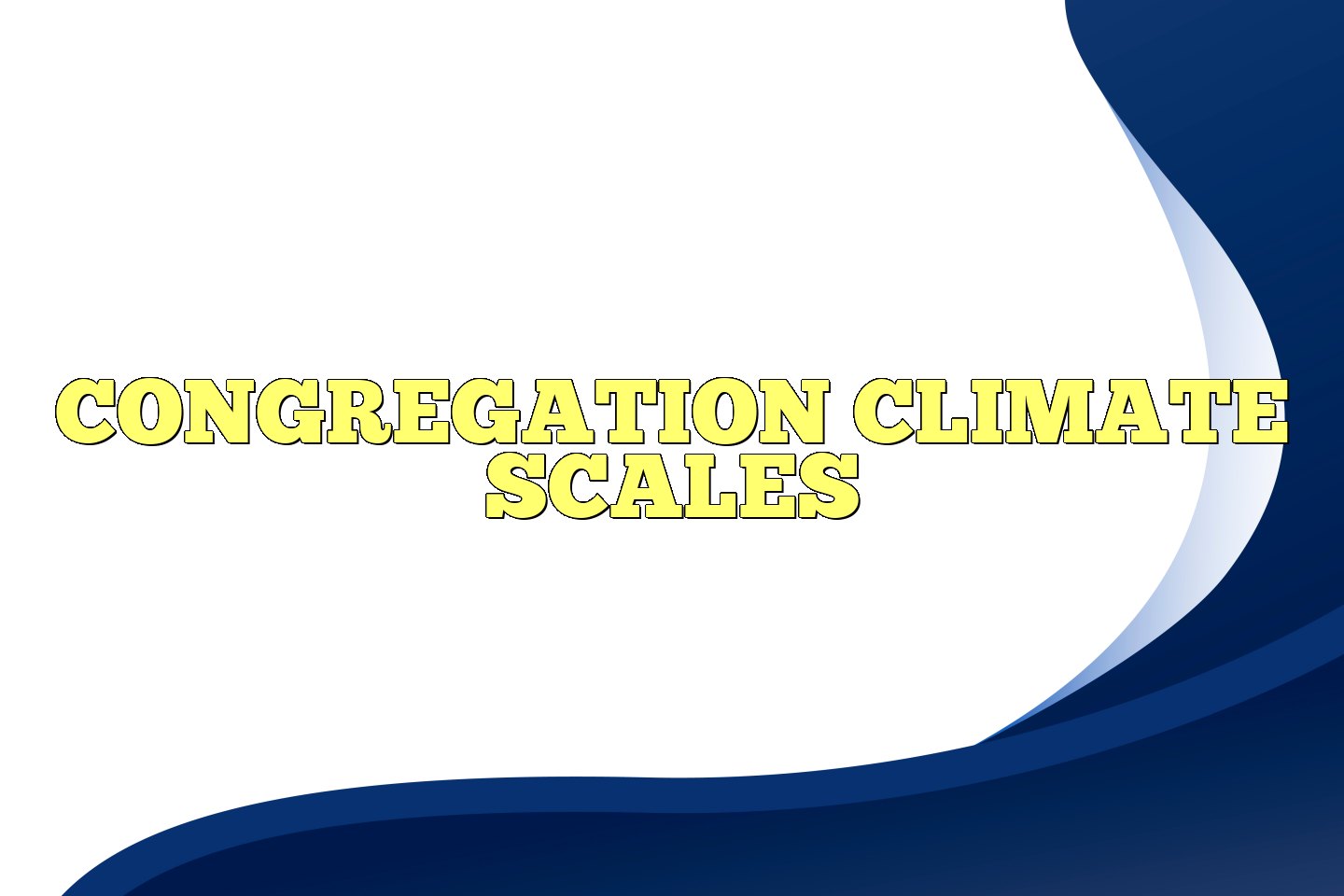 These scales measure the psy­chosocial climate of congregations. Congre­gation climate can be thought of as the "per­sonality" of the church or synagogue (Silverman et al., 1983). More specifically, congregation climate is defined as "psycho­ logically meaningful representations of the church/synagogue" (Pargament et al., 1983, p. 355). Climate theory assumes that cli­ mates vary with different settings, that cli­ mates are a product of environmental and individual characteristics, and that the rela­tionships between climate, setting, and individuals are reciprocally influential (Parga­ment et al., 1983).

The authors of the scales iden­tified dimensions of congregation climate by visiting a variety of religious institutions, reviewing literature concerning organiza­tional climate, and conducting structured in­terviews with clergy and members from Christian and Jewish religious institutions. The following IO dimensions of congregation climate were identified: Autonomy, Sense of Community, Activity, Social Con­cern, Openness to Change, Stability, Expressiveness, Order/Clarity, Intrinsic Reli­gious Orientation, and Extrinsic Religious Orientation. Initially, a scale consisting of 15 items was developed for each dimension. The revised scales measure five dimensions of congregation climate (i.e., Openness to Change, Activity, Stability, Organization and Clarity, and Sense of Community), and consist of IO items each. Respondents are asked to consider how accurately various statements describe their congregation. Items are constructed on a 5-point Likert­ type scale with response possibilities rang­ing from I (not at all descriptive) to 5 (com­pletely descriptive). Scores for each dimension are computed by reverse coding negative items, and computing the mean score for each item (i.e., adding the scores of all congregation members on a particular item and dividing by the number of re­sponses). Item averages are then added to­gether and divided by the total number of items in the scale.

The Congrega­tion Climate Scales are easy to administer, score, and interpret. The instructions are straightforward and the items are clearly worded. Items are face valid, and the pur­pose of each scale is clear (i.e., to assess the climate of the congregation on a particular dimension). There is no ideal score on the CCS, and absolute scores from the question­naire should be used for interpretation. Higher scores on the CCS indicate a posi­tive congregation climate, whereas lower scores designate aspects of the congrega­tional climate in need of improvement. Con­fidentiality of responses should be guaran­ teed in order to increase the chances that congregation members will respond hon­estly.

The CCS was normed on 13 Christian congregations, but can also be used with synagogues. Five ad­ditional congregations (3 Jewish and 2 Protestant) declined to participate. The congregations were diverse in size (range 100 to 6,200), racial composition (4 black and 9 white congregations), denomination (e.g., Baptist, Roman Catholic, African Methodist Evangelical), and average length of membership (range 4-35 years). The sample consisted of 352 members and 13 clergy. Thirty-seven percent of the mem­bers were male, 22% were black, and 71% were married. The average member had be­ longed to the church for 18 years, had some college education, and was 44 years old. This sample was comparable to the total population of the 13 parishes on identifi­able characteristics, but no information was available to compare the level of church involvement of the sample to the total popu­lation.

The Cronbach's alpha coeffi­cients were moderate to moderately high for all scales. The internal consistency esti­mates for the scales ranged from .69 (Intrin­sic) to .83 (Sense of Community). A sub­ sample of participants (n = 25) completed the CCS approximately 1 month after the initial administration. Test-retest reliabilities were all acceptable and ranged from .57 (Expressiveness and Autonomy) to .89 (Order/Clarity).

The intercorrelations among the scales were low to moderately high (range .02 to .58) and suggest some shared variance among the scales. The authors felt there was some theoretical overlap between the scales, and thus several revisions were made to the original scales. Five scales (Ex­pressiveness, Social Concern, Autonomy, Intrinsic, and Extrinsic) were dropped, and some items were incorporated into the re­maining five scales. The revision resulted in coefficient alphas that were moderately high: Openness to Change, .76; Order/Clar­ity, .72; Sense of Community, .78; Activity, .77; and Stability, .76. Taken together, these results show the CCS to be a fairly reliable measure.

Construct and predictive validity were examined by testing 3 hypotheses re­garding congregational climate. First, cli­ mate scales related differently to different congregations. The CCS discriminated well among the members of the 13 churches, F (120, 2470) = 6.67, p < .001, and accounted for 97% of the variance in differences among members. Univariate F tests revealed that although all scales discriminated signif­icantly among the churches, the Activity, Stability, Sense of Community, and Open­ ness to Change scales were more discriminating. Homogeneity coefficients revealed that members within a particular congrega­tion have similar perceptions of the climate of their church.

Second, the CCS related to several attrib­utes of the congregations. A multivariate analysis was significant indicating that the CCS did discriminate congregations based on racial composition, religious identifica­tion, and size of the congregation. Further­ more, the CCS explained a moderately high amount of variance (112 = .81) with respect to these attributes.

Finally, congregation climate related to the individual member's level of religiosity, congregation satisfaction, and competence. The CCS was a significant predictor of all three individual characteristics, particularly religiosity (R2 range .22 to .37) and congre­gation satisfaction (R 2 range .10 to .39). Each of the scales of the CCS exhibited a different pattern of relationships with the member attributes. For instance, Stability and Openness to Change were positively re­lated to member satisfaction, whereas Sense of Community was positively related to all three attributes.

In conclusion, the CCS seems to validly assess congregation climate. As it accu­rately distinguishes between congregations and is reasonably associated with institu­tional as well as individual characteristics, the CCS can be a valuable tool for use in re­ligion research.

Instructions: The following statements have to do with the climate or unique personality of your church. Each statement may be more or less descriptive of your congregation. Please:

To the right of each statement is a row of five numbers. Please draw a circle around one of the five numbers to show how that statement describes your church.

Think about the variety of activities in the church and how much the members support these activities. Indicate how well each of the following statements describes the activities in your church.

Think about how secure and stable your church is as an organization. Indicate how well each of the following statements describes the stability in your church.

Think about how well the church organizes its activities and decisions. Also, think about how clearly the church communicates to the members. Indicate how well each of the following statements describes the organization and clarity in your church.

Think about the closeness, fellowship, and support that members of your church show for each other. Indicate how well each of the following statements describes the sense of com- munity in your church.