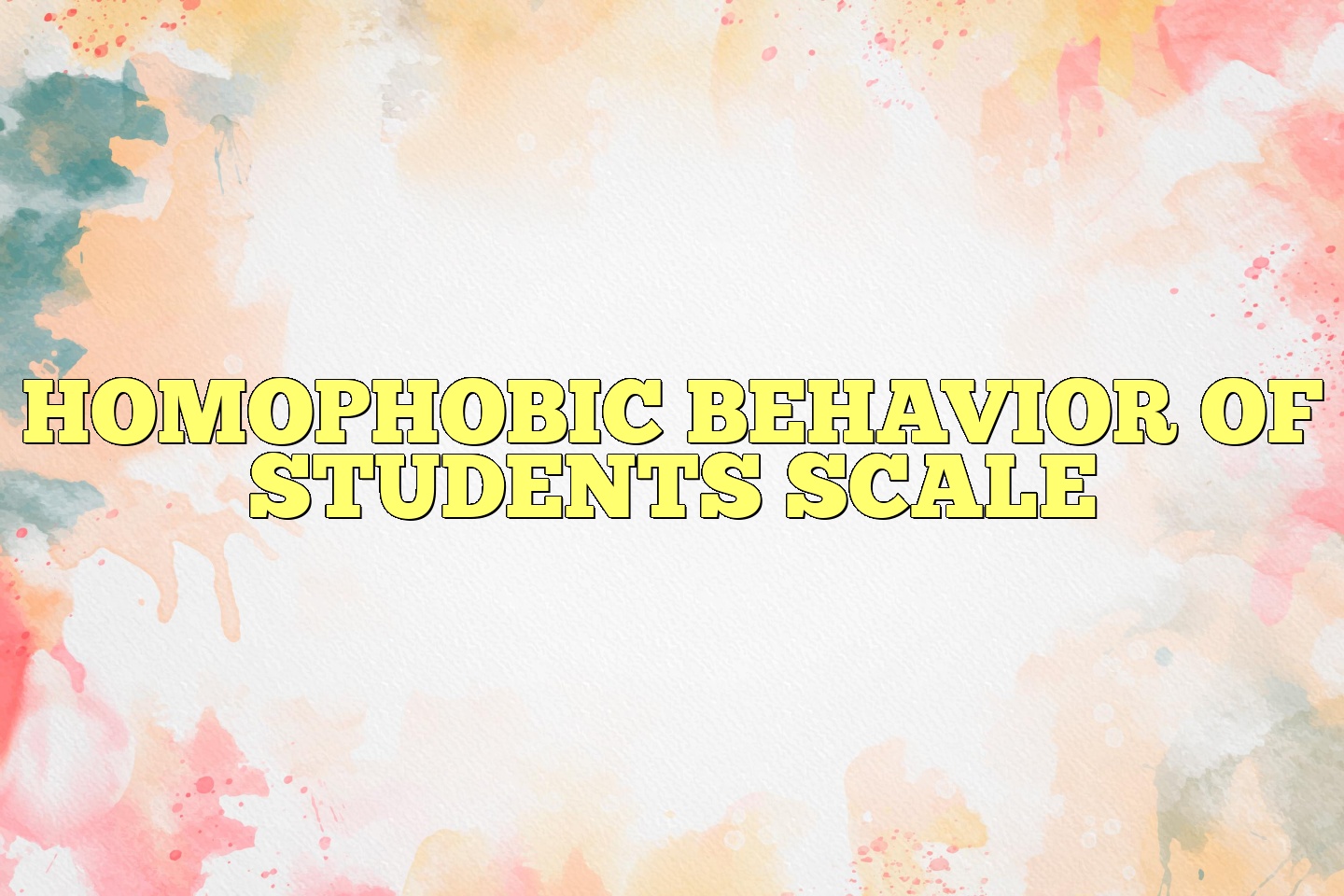 The Homophobic Behavior of Students Scale (HBSS; Van de Ven, Bornholt, & Bailey, 1993, 1996) was developed to measure students’ behavioral intentions toward gay males and lesbians, in the context of teaching about homosexuality. The HBSS complements existing cognitive and affective measures of homophobia, thereby giving researchers of antigay and anti lesbian prejudice an efficient strategy to measure the much neglected, though highly important, behavioral dimension of homophobic responses (Van de Ven, 1994a). Previous assessments of homophobic behavior have relied on highly contrived experimental manipulations which are unsuitable for everyday classroom use and, with their reliance on naive participants, cannot be used in the repeated measures designs of behavior change studies. The HBSS has the advantages of being practical and plausible, and of being a measure of personal commitment to action which can be assessed on multiple occasions. The HBSS can be treated as an individual-differences measure of homophobic behavioral intentions or as a dependent variable when evaluating the impact on behavioral intentions of homophobia reduction strategies (see Van de Ven, 1994b, 1995a, 1995b).

The HBSS consists of 10 items arranged in a 5-point Likert-type format to rate strength of intention from 1 (definitely false) to 5 (definitely true). The first six items are designed to measure, across classroom and social situations, the extent to which students associated willingly or avoided contact with gay males and lesbians. These items were construed as a measure of social distance aspects of behavior. The remaining items were selected to measure additional and related aspects of behavior expressed as willingness to act in support of gay and lesbian rights. Separate analyses of the responses of 97 undergraduate students (26 males; 71 females) and 40 high school students (24 males; 16 females) suggested that the items contributed to a single factor of behavioral intentions. The HBSS is appropriate to use with both high school and college populations. A posttest version of the HBSS is created by changing the instructions minimally as specified in the Exhibit.

Students circle the number from 1 to 5 that corresponds with their willingness to participate in each activity. The HBSS takes approximately 3 minutes to complete.

Acombination of positive and negative items is used to control for potential response set bias. The positively phrased items (i.e., Items 1, 2, 4, 6, 7, 9, & 10) have their scoring reversed in the analysis so that higher scores, following convention, indicate more negative behavioral intentions toward homosexuals. Computed HBSS scores, which can range from 0 (least homophobic) to 100 (most homophobic), are determined by using the equation: HBSS computed score = (HBSS summed raw score –10) X 2.5.

To assess the predictive validity of the HBSS, the 40 high school students were given the opportunity to participate in each of the 10 activities of the HBSS (Van de Ven et al., 1993, 1996). As expected, the group of participants for each activity had a lower HBSS mean than the corresponding

group that abstained from participation. Group means were significantly different at the .005 alpha level (for a family- wise error rate of .05) for six of the HBSS activities.

If the HBSS is used by researchers, notification to the first author of the use and the results obtained would be appreciated.

This scale was developed while the authors were at the School of Educational Psychology, Measurement and Technology, University of Sydney. Laurel Bornholt is now at Charles Darwin University.

Instructions: As part of the unit of work (Posttest version: As part of the follow-up to the unit of work) on lesbian and gay issues, it may be possible to organize some additional activities and guest speakers. So that these can be planned, please indicate in which of the following activities, if any, you would participate. Circle the number that comes closest to representing your willingness to participate. Please do not leave any statements unanswered.

a The scale is repeated after each item.