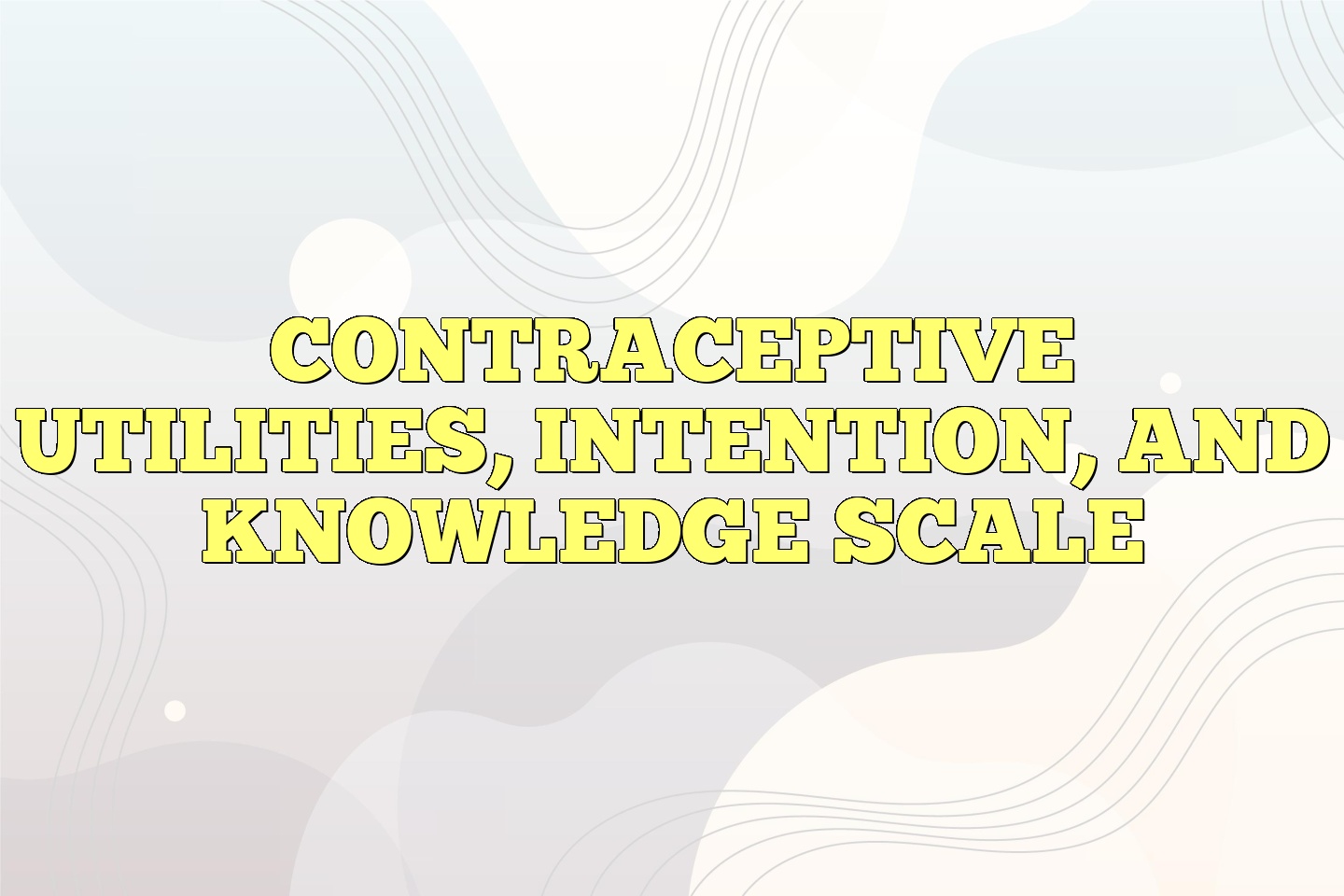 The Contraceptive Utilities, Intention, and Knowledge Scale (CUIKS) was developed to test a social psychological model of contraceptive behavior developed by Condelli (1984). This model combined elements of the health belief model (Rosenstock, 1974), Luker’s (1975) model of contraceptive risk taking, and Fishbein and Ajzen’s (1975) behavioral intention model. Consequently, it is appropriate for use when examining any of these models or the unified model. It can also be used to study women’s knowledge and perceptions about contraceptive methods, their attitudes about pregnancy, and to measure intention to use contraception.

The scale is designed to be used with women and is divided into three parts. Part one has nine items (Questions 1–6 in the Exhibit) and measures perceived likelihood of becoming pregnant, both when the respondent is using her chosen method of contraception and with unprotected intercourse.

It also asks the likelihood she will use her method at each act of intercourse over the next year. This item is designed to measure intention to use contraception. One item measures attitude about becoming pregnant at the present time. This part of the scale also has the respondent rate the degree of subjective social support she expects from “people who are most important” to her for using each of four methods of contraception (diaphragm, IUD, the pill, and condoms). Part one also includes an item asking the respondent to state her current method of contraception.

Part two of the scale (Questions 7 and 8 in the Exhibit) has 16 items and measures respondent attitudes about four methods of contraception. The respondent indicates her perceptions of the effectiveness of each method. Her concerns about effects from using each method are also measured.

The third part of the scale is a multiple-choice knowledge test. This test is divided into two parts. The first part is an 8 item test of general knowledge of conception and contraception. The second part is a 4 item test that measures the respondent’s knowledge of the primary birth control method she is currently using. Although the test contains four items for each of the four methods of contraception,2 the respondent answers only the four questions dealing with her method.

The CUIKS was developed to be used in a family planning clinic. It was tested at the clinic on over 600 women of highly diverse age and educational backgrounds. Consequently, it can be used on any population of women.

The scale is designed to be self administered either individually or in a group setting. Respondents indicate their answers by circling the number that best represents their feelings. For the knowledge scale portion, respondents circle the letter that indicates what they believe to be the correct answer. The scale requires an average of 15 minutes to complete.

For parts one and two of the scale, the number circled on the scale is used as the respondent’s score on the item. Items 1 and 4 represent the respondent’s perceived susceptibility to becoming pregnant, with higher scores indicating a greater likelihood. Item 3 measures intention to use the chosen contraceptive method; Item 6 measures the degree of subjective normative support expected by the respondent for using each method. Both items are positively scaled. Item 5 measures the perceived severity of pregnancy for the respondent and is scored by assigning a value of 7 to the first, most negative statement (It would be the worst thing that could happen) and a value of 1 to the last, most positive statement (It would be the best thing that could happen). The inter- mediate statements decrease in value consecutively according to their order listed in the item (e.g., the third statement down, It would be sort of bad but not terrible, is assigned a value of 5, the following statement a 4, etc.).

For part two of the scale, the value circled by the respondent is the score for that item. The scores for Item 7 on effectiveness and convenience of the methods are reverse scored. For the knowledge portion of the scale, items are scored as correct or incorrect. Two scores are then derived by summing the number of correct answers. Items 1 through 8 comprise the general knowledge subscale; the four items relating to the respondent’s chosen contraceptive method make up the specific knowledge subscale. A total score is computed by adding general and subscale scores. The correct answers are indicated by an asterisk in the Exhibit. No response on an item is scored as incorrect.

The reliability of the knowledge scale was computed using responses from 632 women visiting a suburban family planning clinic. For the total knowledge scale, Condelli (1986) reported the Kuder Richardson 20 was .62. The reli-ability is somewhat low due to the varied nature of the top- ics covered in the scale.

The validity of the scale has been demonstrated through its ability to predict contraceptive behavior and contraceptive choice. Condelli (1984) obtained four measures of contraceptive behavior from women who had completed the scale an average of 6 months previously. Using multiple regression, a significant proportion of variance of each behavioral measure was accounted for using Items 1, 5, 6, 7, and 8 as predictor variables. For Items 7 and 8, only the respondent’s rating of the effectiveness, convenience, concern about minor side effects, and concern about major side effects of her own chosen contraceptive method were used in the analysis.

The behavioral measures examined included whether the respondent had unprotected intercourse at any time since completing the scale (coded 0 or 1; R = .21); frequency of use of her chosen contraceptive method on a 4 point scale (1 = every time, 4 = less than half the time; R = .36); period of time in weeks the respondent had been sexually active with- out using contraception (R = .42); and ranked actual use of effectiveness of the chosen contraceptive method (R = .38). All multiple Rs were significant at the .05 level or less. Condelli (1986) also used the scale to predict choice of contraceptive. Women who chose to use the pill were compared with diaphragm users in a discriminant function analysis, with the scale items and total knowledge test score as predictors. The scale significantly distinguished pill users from diaphragm users on their reported belief the diaphragm was more inconvenient to use and the pill more convenient, expressing less concern about the pill’s side effects, believing they were more protected from pregnancy when using the pill and more susceptible when not using it, and having less knowledge about contraception. More than 60% of the variance between the groups was explained by the discriminant function.

The CUIKS may be copied and used, with appropriate citation, without cost.

1 = Not at all concerned 2 = Slightly unconcerned 3 = Unsure

According to the most accepted current thought, the IUD’s effectiveness is due to:

A diaphragm should be used:

Contraceptive foam is most effect in preventing pregnancy when inserted inside the vagina:

The use of a condom when having sexual intercourse is recommended because:

A woman can get pregnant:

Over a one year period, what is the likelihood that a sexually active woman who uses no birth control will become pregnant?

A woman is most likely to become pregnant (no matter how long or short her menstrual cycle) if she has sexual intercourse about:

Answer these questions only if you decided on the pill as your primary method of birth control.

Some warning signs that may signal the onset of pill related problems are:

Medical conditions that make it dangerous for a woman to use the pill are:

Present evidence indicates that the most serious side effect of the pill is:

Which of the following group of women has the highest risk of side effects if they use the pill?

This completes the survey. Thank You!

Answer these questions only if you have decided on the diaphragm as your primary method of birth control.

This completes the survey. Thank You!

Answer these questions only if you have decided on the foam and/or condoms as your primary method of birth control.

In the original instrument, there were four items for the IUD. Because of the infrequent use of the IUD by women in the U.S. today, these items have been removed from this edition of the Exhibit, to save space.