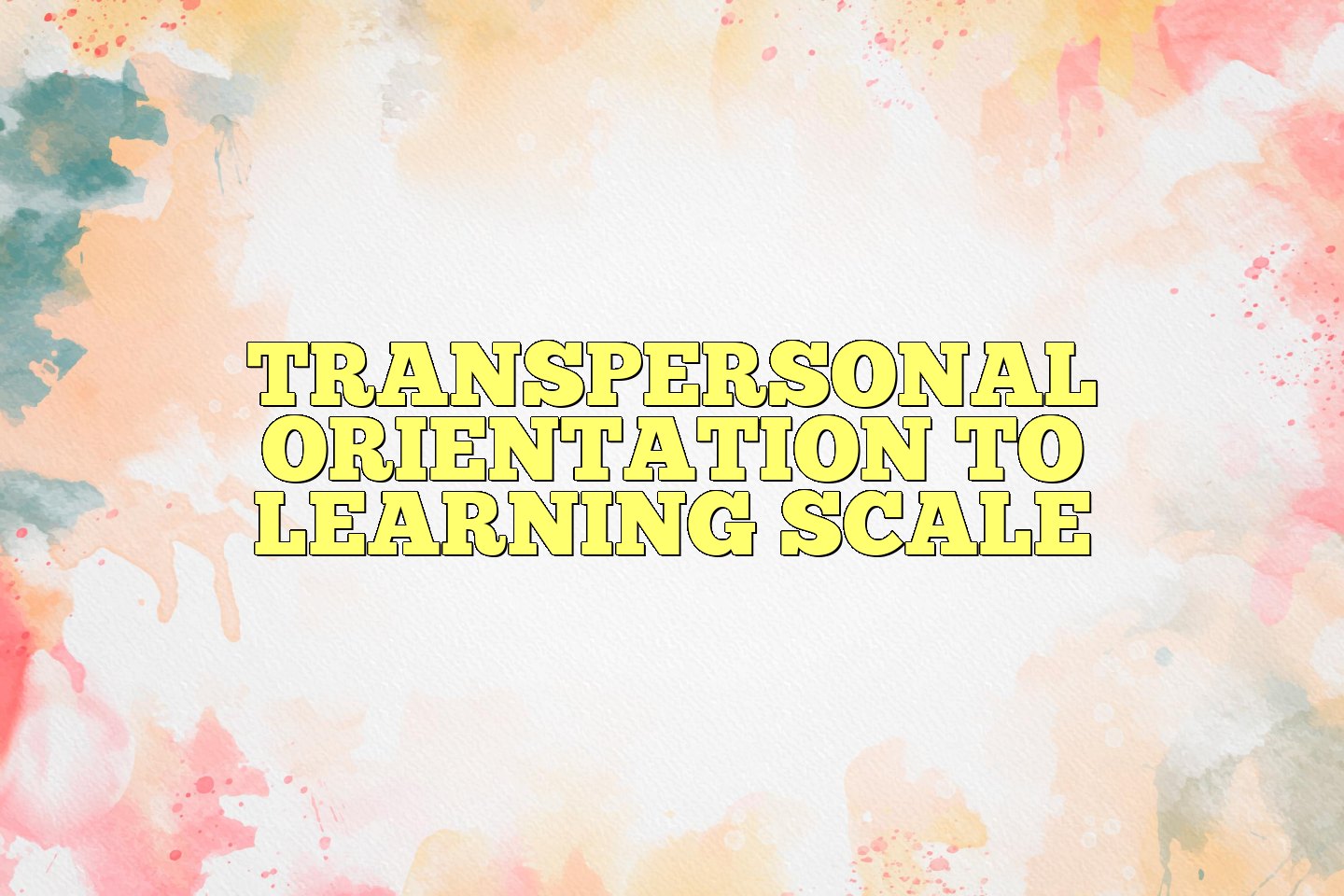 The Transpersonal Orientation to Learning Scale (TOTL) measures attitudes toward using a transpersonal approach in education. According to Shapiro and Fitzgerald, a transpersonal approach to edu­ cation would advocate the development of human spiritual potential. It would advance using intuitive and receptive modes of con­sciousness, such as fantasy techniques, meditation, and altered states of conscious­ ness, in conjunction with the "cognitive, ra­tional, logical and active modes" (Shapiro & Fitzgerald, 1989, p. 376).

This 40-item scale uses a 5- point Likert format with the usual range of response options: "strongly agree" = 5 points, "agree" = 4 points, "uncertain" = 3 points, "disagree" = 2 points and "strongly disagree" = 1 point. All items were so worded that agreement to every item indi­ cates greater support for the transpersonal approach to education. Four subscales of ten items each were identified: (a) Fantasy Techniques Applied in Schools, (b) Mysti­cism Preferred to Science as an Epistemol­ogy, (c) Mystical/Occult/ Paranormal Tech­niques Applied to Schools, and (d) Transcendent Consciousness. However, the authors caution that this scale may not mea­ sure four dimensions and instead measure only one dimension: a general orientation to the transpersonal approach; or possibly two: a theory-oriented dimension (subscales II & IV) and a practice-oriented dimension (sub­ scales I & III).

The authors contend that the contents of their items are consistent and representative of contents in transpersonal psychology be­ cause they were developed from classic and current writings in the field. In describing what a transpersonal orientation professes, Shapiro and Fitzgerald (1989) write that "intuitive and receptive modes of con­sciousness are considered equal [emphasis mine] in importance to cognitive, rational, logical, and active modes" (p. 376). How­ ever, this inclusive description of the transpersonal approach does not seem reflected in TOTL items that decry the limits of science ("As a probe into the way things are, science is a powerful but strictly limited instrument." [Item 31) while extolling the exclusivity of mystical states ("Mystical ex­perience is the source of all true art and sci­ence" [Item 101). If all modes are equal, why should the authors expect an advocate of transpersonal psychology to denigrate the cognitive/rational logical modes in favor of intuitive and reflective modes?

Other apparent discrepancies exist be­ tween what Shapiro and Fitzgerald describe as this field's concern and what other repre­sentatives in the field have stated should not necessarily be this field's primary focus (ul­timate, altered states and the paranormal). The authors state that transpersonal psy­chology concerns itself with "ultimate human capacities and potentialities" (p. 376), a view reflected in TOTL item 4: "Sci­ence can deal with instrumental values, but not with intrinsic (ultimate) values." In 1973, however, a mouthpiece for the field, The Journal of Transpersonal Psychology, decided to drop the term "ultimate" from its statement of purpose, acknowledging that much of the field does not focus on the ulti­ mate (Walsh & Vaughan, 1993). Moreover, Wilber (1993) asserts that altered states, however valued by transpersonal psychol­ogy, should not necessarily be the field's dominant paradigm; yet TOTL items 13 and 14 privilege altered states. Finally, some authors within transpersonal psychology would not include parapsychology as a sub­ set (Boucouvalas, 1980) and so might ques­tion the references made to psychic phe­nomena used in items 17, 19, 20, 22, 31.

No special skills or instructions are needed to administer or score this paper-and-pencil measure of gen­eral orientation toward the transpersonal ap­proach to education. The scale takes about 20 minutes to administer. TOTL scores and subscale scores equal the sum of the rele­vant item responses. Higher scores indicate greater endorsement of the transpersonal approach to education. In analyzing the scores, the researcher should consider that since the wording of every item supports the transper­sonal approach and the same set of re­sponses is used throughout, TOTL scores may be subject to response set bias.

The pilot study for this measure used the responses of a total of 166 students from four different graduate programs in the School of Education at the University of California, Santa Barbara. The programs were the following: Confluent (Humanistic) Education, Counseling Psy­chology, Single Subject Teaching Creden­tial, and Multiple Subject Teaching Creden­tial. The size of the groups was unequal.

The authors propose that the con­ tent validity of the TOTL's 40 items was built into the scale by basing item develop­ment on a content analysis of the writings of 25 noted transpersonal/humanistic authors in education and psychology. Then content validity was furthered by having the result­ing 222 items independently judged by nine academics in Confluent (Humanistic) Edu­ cation for relevance and clarity. On the basis of interjudge agreement and item variance from a pilot study, 67 items were retained. Based on an item analysis of these 67 state­ments, 40% of the items were eliminated. Nineteen items were eliminated because of "low item-total correlations and/or little re­sponse variance" (Shapiro & Fitzgerald, 1989, p. 378). Next, eight additional items were eliminated based on a preliminary fac­ tor analysis and the judgment of the authors about these items' substantive relevance. The remaining 40 items constitute the TOTL.

Criterion validity of the TOTL was sup­ ported in two ways: (a) use the TOTL to compare groups of students expected to have differing views on the transpersonal approach to education and (b) demonstrate the presence of positive correlations be­ tween TOTL and measures with similar con­ structs. First, it was anticipated and demon­strated that the mean score for the Confluent (Humanistic) Education students (152) would be significantly higher than mean score of Counseling students (139, F [3,61] = 14.08, p < .001). A post hoc test for com­ parisons between groups of unequal size re­portedly supported these comparisons (Steel-Torrie extension of Tukey's HSD test [Lehman, 1995, p. 360]). It was further demonstrated that mean scores for the Con­ fluent and Counseling groups would exceed both the Single Subject Credential mean score (127) and Multiple Subject Credential mean score (129). The two Teaching Cre­dential groups did not differ significantly from each other.

To explore the relationship between the TOTL and measures designed to assess sim­ilar constructs, scores on the TOTL were correlated with four other scales. The signif­icance level was set at .05. Responses to the TOTL correlated significantly (.46) with a measure of attitudes toward humanistic in­structional values (Orientation to Learning scale; Shapiro, 1985). A second positive correlation (.38) was found between a measure for a type of visionary seeker who might be expected to value the transpersonal (Intuitive-Feeling temperament scale of the Kiersey Temperament Sorter [Kiersey & Bates, 1978]) and the TOTL. Third, TOTL scores correlated (.22) with the Concrete Experience of the Learning Style Inventory (Kolb, 1976). However, TOTL did not cor­ relate significantly (.15) with the Divergent Learning Style subscale on the Learning Style Inventory (Concrete Experience Plus Reflective Observation).

Factorial validity was indecisive. One principal component analysis that used a varimax rotation (which attempts to mini­mize the number of variables that have high loadings on a factor, thereby enhancing the factor's interpretability) supports the unidi­mensionality of the TOTL. A secondanaly­ sis using an equamax rotation (which at­ tempts to simplify both variable and factors and divide the variance across factors) sup­ ported a four-factor solution. The four fac­ tors accounted for the overall variance (53%) as follows: Factor I, 16%; Factor II, 10%; Factor III, 15.5%, and Factor IV, 11%.

The TOTL appears to measure a general orientation toward a transpersonal orienta­tion to education, although it may not match the transpersonal orientation as described by the authors or be representative of a field that has not yet agreed on how to define it­ self. The TOTL is unique in being a transpersonal measure related to educational research. For the psychology of religion, it may serve as a useful measure to compare with measures of spirituality and with mea­ sures of learning styles in religious educa­tion.

Shapiro, S. B. (1987). The instructional values of humanistic educators: An expanded, empirical analysis. Journal of Humanistic Education and De­ velopment, 25, 155-170.

Shapiro, S. B., & Fitzgerald, L. (1989). The de­ velopment of an objective scale to measure a transpersonal orientation to learning. Educational and Psychological Measurements, 49, 375-385.