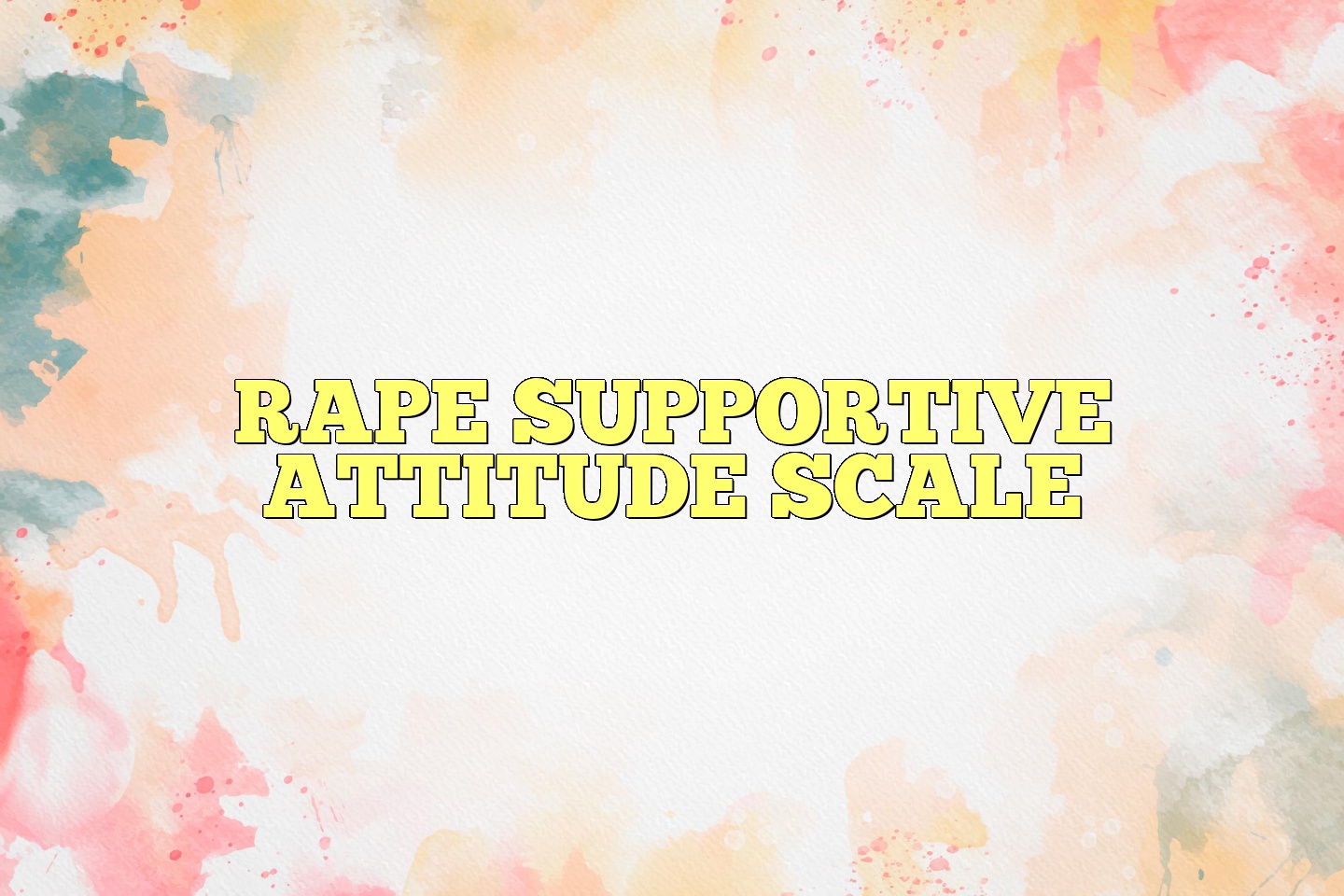 The purpose of the Rape Supportive Attitude Scale is to measure attitudes that are hostile to rape victims, including false beliefs about rape and rapists. Seven beliefs measured by this scale are (a) women enjoy sexual violence, (b) women are responsible for rape prevention, (c) sex rather than power is the primary motivation for rape, (d) rape hap- pens only to certain kinds of women, (e) a woman is less desirable after she has been raped, (f) women falsely report many rape claims, and (g) rape is justified in some situations. Researchers (Burt, 1980; Marolla & Scully, 1982; Russell, 1975; Williams & Holmes, 1981) have found support for the views that these beliefs not only promote rape but also hinder and prolong the recuperative process for survivors of a rape.

The Rape Supportive Attitude Scale was developed from a pool of 40 items from the rape attitude measures of Barnett and Feild (1977), Burt (1980), Koss (1981), and Wheeler and Utigard (1984). The 20 items selected for the scale meet two criteria: (a) the items have content validity (i.e., they assess one of the seven victim-callous beliefs listed above), and (b) the items have high item-total scale correlations and high factor loadings on the same factor. The response options for each item are one of the five Likert scale choices: strongly disagree (1), disagree (2), undecided (3), agree (4), or strongly agree (5).

The Rape Supportive Attitude Scale was administered to two college student samples in the northeastern United States (Lottes, 1991). Students completed the scale in their regularly scheduled classes. For both samples, the 20 scale items were randomly distributed in a questionnaire containing 70 other items requiring similar Likert-type responses. The first sample consisted of 98 males and 148 females from education, health, and sociology classes at two universities. The second sample consisted of 195 males and 195 females from business, engineering, English, education, history, mathematics, physics, political science, and sociology classes at three universities. The majority of the students in both samples were single and in the 19 to 22 age range. The Rape Supportive Attitude Scale is appropriate to administer to adults.

All of the items are scored in the same direction. To break up any response set, the 20 items of this scale can be randomly placed among Likert-type items assessing other characteristics. To determine each respondent’s score for the scale, add the responses (coded 1 through 5) to the 20 items. The higher the score, the more rape supportive or victim-callous attitudes are supported by a respondent.

A principal components analysis of the data from both samples revealed that a single, dominant factor emerged, accounting for 37% of the variance in each case. In both analyses, all items loaded on this factor at .39 or greater.

Test-retest reliability was .53 and the Cronbach alpha for the senior sample was .76 (Bell, Lottes, & Kuriloff, 1995). Construct validity of this shortened Rape Supportive Attitude Scale was supported by significant correlations in the predicted directions between this scale and measures of feminist attitudes, male dominant attitudes, liberalism, and social conscience for both the first-year student and senior samples (Bell et al., 1992, 1995). For both samples, men reported significantly higher (p < .001) scores on the Rape Supportive Attitude Scale than did women (Bell et al., 1992, 1995).

Directions: Write all your responses on the computer answer sheet. Use a No. 2 lead pencil. To indicate your opinion about each statement, shade in the number corresponding to one of the five circles. Indicate whether you strongly disagree (1), disagree (2), are undecided or have no opinion (3), agree (4), or strongly agree (5).

Remember: Be sure that the statement you are reading corresponds to the statement number you are marking on the answer sheet. Mark only one response for each statement.