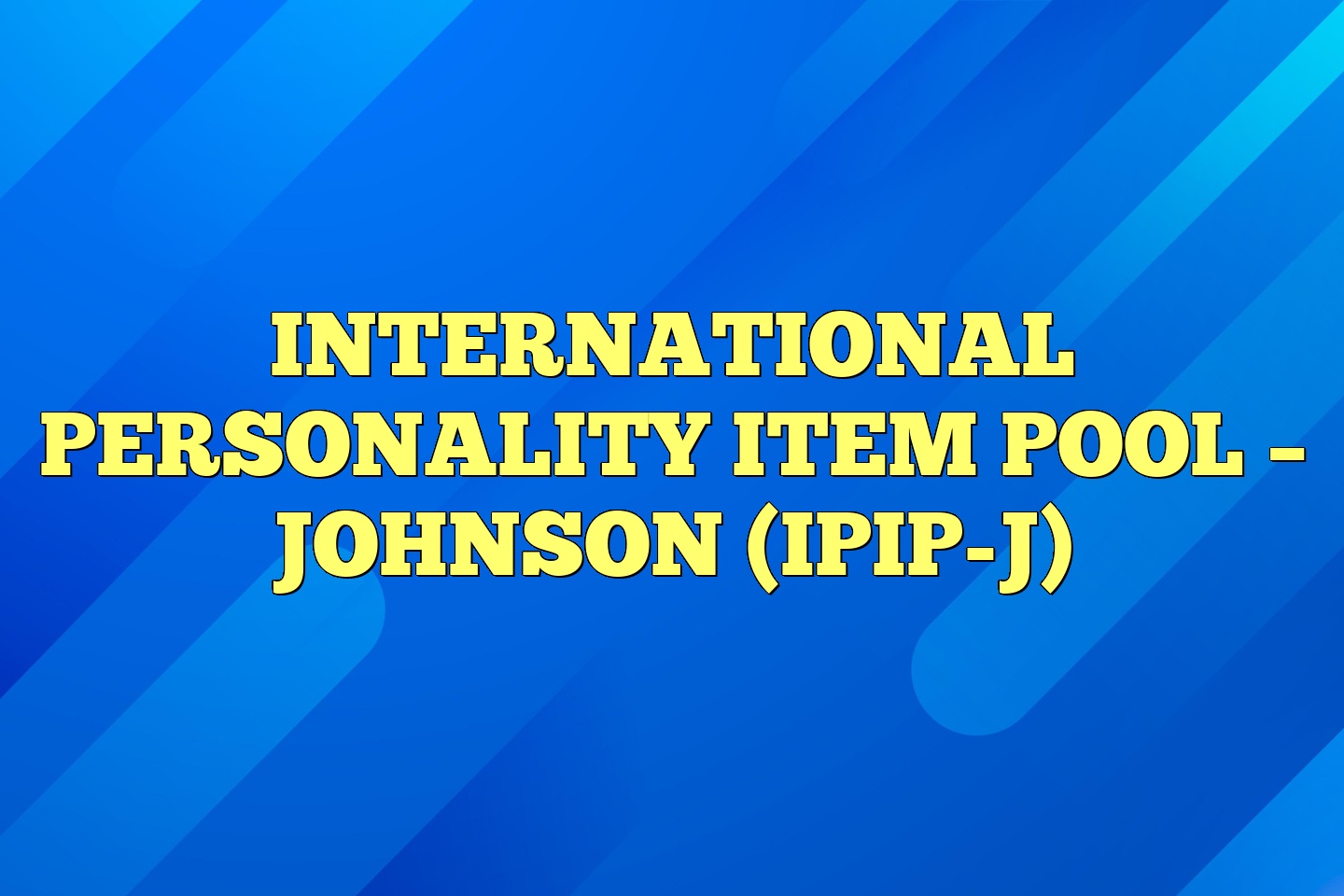 The IPIP-J was developed by John A. Jonson and was published in October 2000. It was designed to measure the Big Five Traits of personality in adults. During this time, progress in the theory around the FFM constructs had become incredibly slow as there was limited access of researchers to personality measures due to copyright and the pay-to-use nature of the tests which created a financial barrier for some (Maples et al., 2014).

In response to this need for research, Lewis Goldberg established an international collaborative effort to develop and work on a pool of free personality items. This was called the International Personality Item Pool. So far it’s had a great impact on the literature, with a revised 300 item IPIP version of the NEO developed in 1997. The IPIP-NEO was developed by changing an existing item pool and administering it to an adult community sample to develop 10 item scales for each of the 30 FFM facets. The tools are available on the website and require no permission for use.

Though the IPIP-NEO was comprehensive and freely available, it was prohibitive to researchers with time or budget constraints and could also be seen to result in participant fatigue especially when a battery of assessments was required (Maples et al, 2014; Johnson, 2014). Thus underlies the rationale for the IPIP-J. The development of the scales built on what was previously established with the IPIP-NEO.

Johnson describes developing the IPIP-J in three steps (Johnson, 2014). Firstly, the reliability application on SPSS was used on the IPIP-NEO to generate corrected item-total correlations for each of the 10 items in each facet scale. The item with the lowest item-total correlation was removed and the application run again until four items remained. Secondly, a rational-intuitive strategy was employed whereby Johnson examined the items for near duplicates, fidelity to the original NEO-PI-R and any reference to disability or anything that would cause legal issues when using the scale for personnel selection. Finally, computation of alphas for domain and facet scales was calculated separately by sex. A few scales didn’t reach the rule of thumb of 0.7, but all were at least 0.6 which is considered adequate for four item scales in the development stage of research.

The scale was developed using an online sample of 21,588 adults and the author did not say where most of their respondents were from (Johnson, 2014).  Scores on the facets of the IPIP-J showed reasonably good internal consistency with α= 0.68 (Maples et al., 2014). The IPIP-J was also tested against the IPIP-NEO for correlations with the NEO- PI-R. Convergence with the NEO-PI-R was reasonably good with r= 0.66 (Maples et al., 2014).

So far the IPIP-J has been used in research to investigate an array of different areas such as collaborative task performance, personnel selection and psychopathic personality traits (Maples et al., 2014). The IPIP-J provides a time efficient way to administer personality assessment in a way that is open to all researchers. Sharing within the IPIP has resulted in advances in the field as many have participated and began to create common understanding. Perhaps one possible limitation with such a short inventory is that if one item is answered untruthfully for any reason, it would have a much greater impact on the data for that facet than a more comprehensive scale. Use of other measures to triangulate data could be a helpful suggestion to ensure robust collection of information.