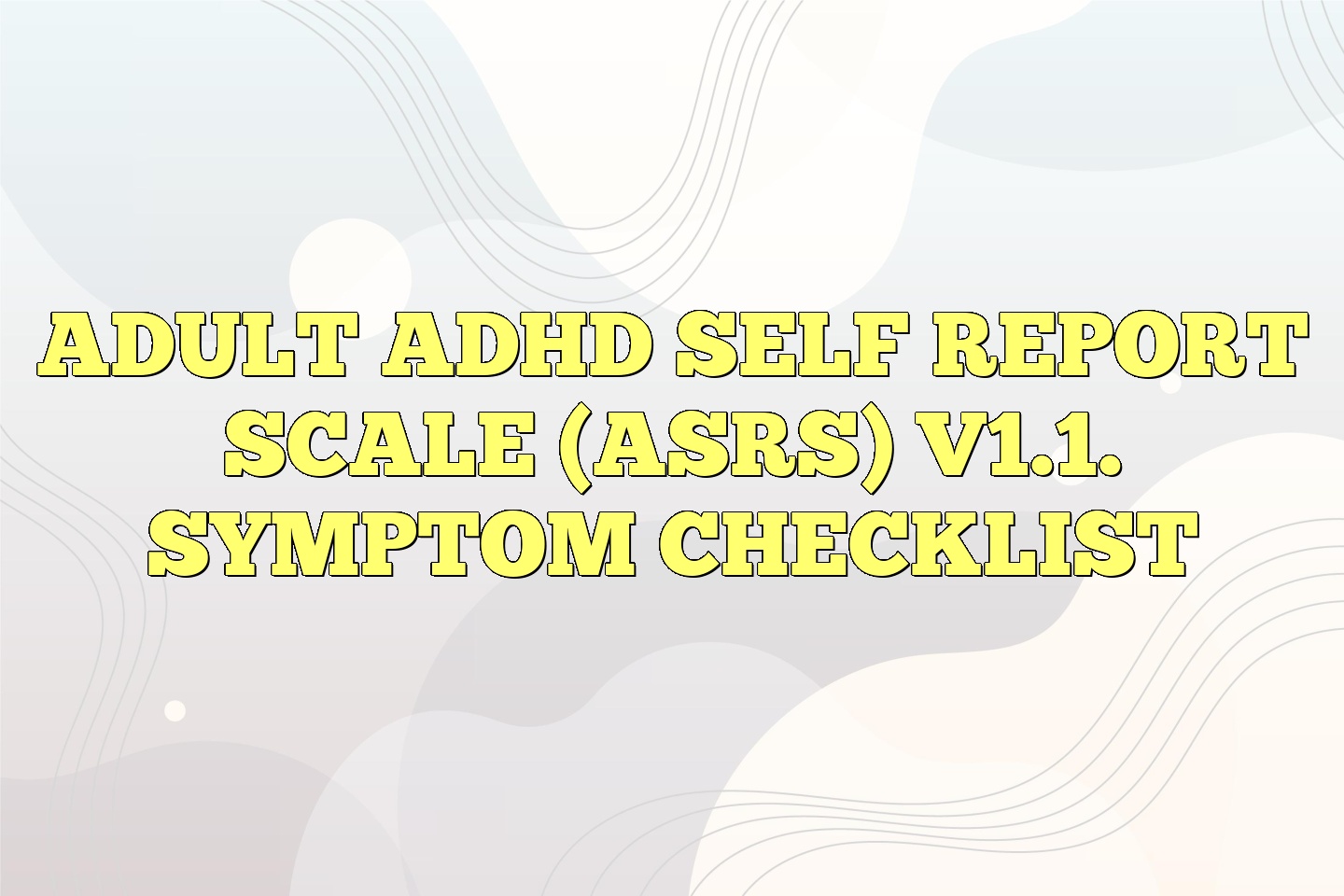 The Adult ADHD Self-Report Scale (ASRS) v1.1 Symptom Checklist was developed by the World Health Organisation (WHO) workgroup to provide a valid self-assessment of current ADHD symptoms in adults, as part of the WHO World Mental Health (WMH) Survey Initiative (Kessler et al., 2005). The scale consists of 18 items that correspond directly to the 18 DSM-IV symptoms (for both inattention and hyperactivity). The items were deliberately worded to reflect ADHD symptoms in a more suitable context for adults. For instance, references to “play” and “schoolwork” (in the DSM-IV) have been replaced by “work” and “boring or difficult project” respectively. For each item, respondents are required to indicate how often a particular symptom of ADHD has occurred to them over the past six months on a five-point response scale ranging from 0 – 4 (0 “never”, 1 “rarely”, 2 “sometimes”, 3 “often” and 4 “very often”). The focus on frequency rather than severity of symptoms was to make scale instructions easier for participants to understand. The ASRS does not utilize total or scale scores to indicate diagnostic likelihood. Instead, the authors of the scale recommend counting the number of items the respondent endorses that fall into the gray shaded boxes. Frequency count was recommended over summation of response scores to account for the difference in the weight of responses (e.g., respondents may be more reluctant to admit the frequent occurrence of some symptoms more than others. If the symptom count is 9 or greater, the respondent may need to be referred for further evaluation. Part A of the scale consists of 6 of the most predictive items and has been proposed by the authors for use as a short-form screener (ASRS v1.1 Screener). The authors also suggested that four or more responses within the grey shaded boxes within Part A warrants further investigation.

Developed in the US, the ASRS was originally validated for use in an adult population (>18 years; Kessler et al., 2005; Adler et al., 2006), although a subsequent validation study (Alder et al., 2012) further extended its utility beyond adults to adolescences (13-17 years). The initial validation study by Kessler and colleagues was conducted with a community based sample of adults in US. 154 participants (no childhood ADHD, some symptoms in childhood, diagnosis in childhood but deny current symptoms, diagnosis in childhood and endorse current symptoms) completed a structured, clinician-administered interview of current ADHD symptoms, followed by the ASRS. The authors found adequate sensitivity (56.3%), excellent specificity (98.3%), excellent total classification accuracy (97.9%) and adequate κ value (0.58). Further evidence for the use of the ASRS was found in a clinical population of 60 ADHD adults. The study (Adler et al., 2006) found high internal consistency (0.84) and concurrent validity with a clinician-administered ADHD rating scale (0.83). The 6-item screening version of the ASRS as also been found to possess strong psychometric properties in a cross-validation study on a representative sample of 668 health plan members (Kessler et al., 2007). Researchers of the study for a high internal consistency (0.63-0.72) and test-retest reliability (0.58-0.77).

The ASRS has also been translated to 10 different languages (e.g., Chinese (Mandarin), Dutch, German, Japanese, Portuguese, Russian, and Spanish) although only some of the translated scales have been cross-culturally validated. For example, the Chinese ASRS was found to have high internal consistency (0.83∼0.91) and concurrent validity (0.37∼0.66) with a sample of Taiwanese adults (Yeh et al., 2008) A cross-cultural validation study (of the Korean version of ASRS also found the tool to be psychometrically sound in a Korean sample (Kim, Lee & Joung, 2013).

A growing body of literature supports the use of a ASRS as a screening tool in both general (e.g., Hine et al., 2012)  and clinical populations (such as substance-abuse disorders e.g., Dakwar et al., 2012). In particular, its item working appears to be face valid, and appropriate for tapping the expression of ADHD symptoms in adults (albeit based on the DSM-IV). The scale is free (https://add.org/wp-content/uploads/2015/03/adhd-questionnaire-ASRS111.pdf ) and numerous non-English translations are available. Its brevity and simplicity also means its easy to administer and score. It appears to be widely use for both clinical and research purposes (e.g., Herrmann et al., 2009; Reuter, Kirsch & Hennig, 2006). The ASRS is, however, not a diagnostic tool. In particular, it does not provide information on childhood symptoms, which is necessary in making an ADHD diagnosis. The scale also only assesses frequency – not the functional impact – of symptoms. Hence it is more suitable as a screening or symptom tracking tool and should not be used as the sole basis for clinical diagnosis.