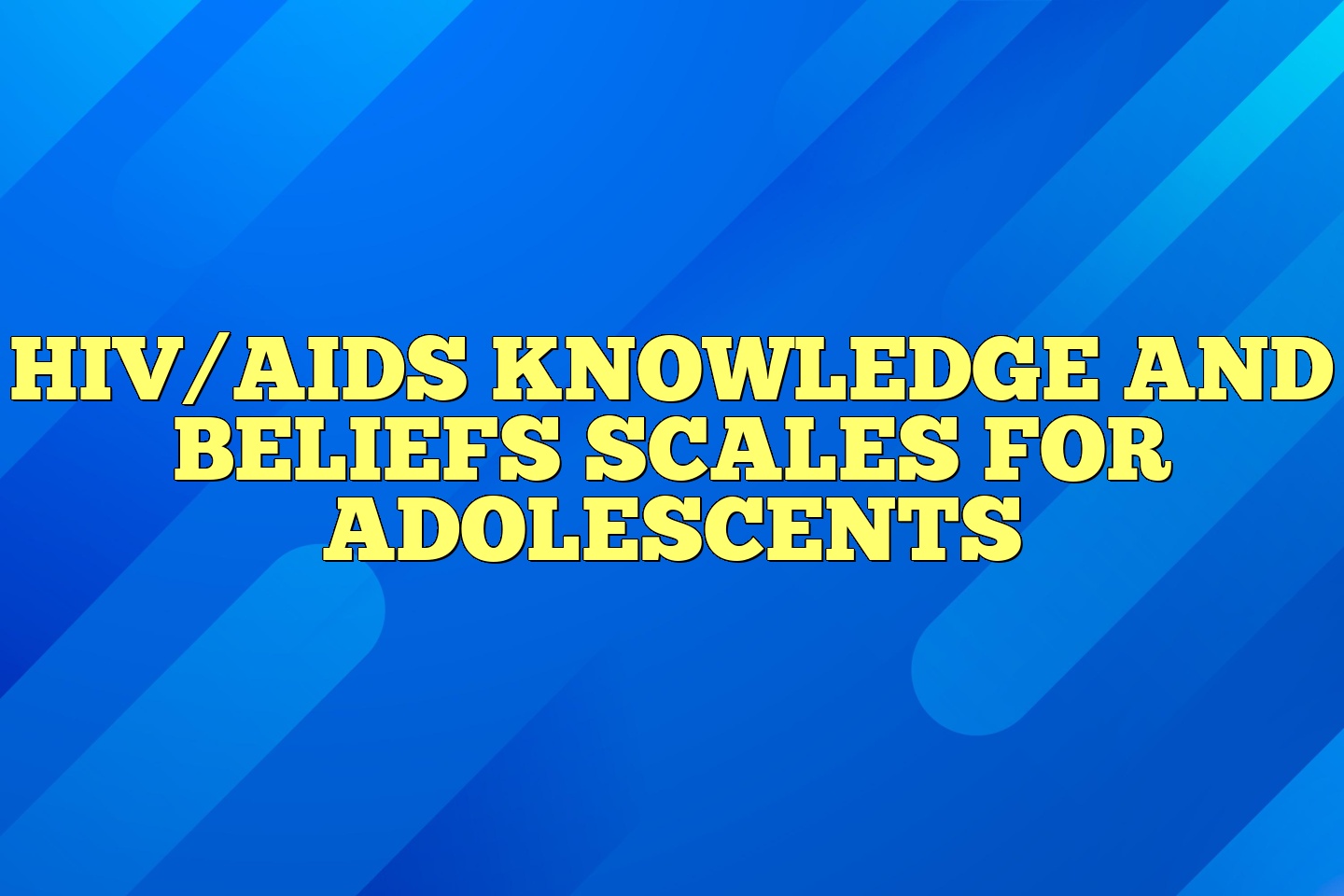 Assessment is essential to the evaluation of educational and other interventions designed to increase knowledge and encourage the adoption of safer beliefs about preventing HIV/AIDS. We developed and evaluated measures for adolescents, who were at particularly high risk, owing to their sexual risk behaviors, for contracting HIV/AIDS and other sexually transmitted diseases (Whaley, 1999).

Two advisory councils, composed of experts in the area, evaluated a pool of items on the basis of content, accuracy, reading level, and clarity. After revising items, knowledge and beliefs measures were developed, which were revised again based on pilot testing with adolescents.

Incarcerated youths were recruited from a juvenile detention facility in Virginia. Youths ranged in age from 12 to 19 years old, with a mean of 15.8. A total of 893 participants were assessed, including 754 male participants and 139 female participants. Participants’ ethnic backgrounds were 55% African American, 39% Caucasian, 3% Native American, and 3% other. Since their original development, these measures have been adapted for other purposes. To ascertain that participants had at least a minimal level of HIV/AIDS knowledge (Patel, Gutnik, Yoskowitz, O’Sullivan, & Kaufman, 2006; Patel, Yoskowitz, & Kaufman, 2007), a modified, 12-item Knowledge scale was used as a screening instrument of heterosexual undergraduate college students (ages 18 to 24) in New York City. Items from the HIV/AIDS Knowledge and Beliefs measures have been included in research with adult Kenyan males and females (Volk & Koopman, 2001), Indian women (Ananth & Koopman, 2003), and adult women in Botswana (Greig & Koopman, 2003).

The HIV/AIDS Knowledge Scale uses true-false response options and also includes a separate Safer Alternatives subscale in which the respondent is asked to identify the safer action of two alternatives. The response format for the Beliefs About Preventing HIV/AIDS instrument is a 4- point Likert-type scale for each item (1 = Agree Strongly to 4 = Disagree Strongly). It takes respondents about 20 minutes to complete the HIV/AIDS Knowledge Scale and 15 minutes to complete the Beliefs About Preventing HIV/ AIDS Scale.

For the HIV/AIDS Knowledge Scale, item scores are recoded as correct = 1 or incorrect = 0 and then summed for the total score. In the computation of the Beliefs About Preventing HIV/AIDS scores, 19 items are first reverse scored, as shown in the scoring instructions. Higher Beliefs scores indicate stronger endorsement of beliefs about pre- venting HIV/AIDS.

Incarcerated Adolescents In the research with incarcerated adolescents, for the over- all Knowledge true-false scale, the alpha equaled .81. The Safer Alternatives subscale was not administered, so it could not be evaluated with this sample. The Beliefs measure demonstrated strong internal consistency for the overall scale when administered to incarcerated adolescents (alpha = .88). The subscales demonstrated marginal to good internal consistencies: Peer Support for Safe Acts (alpha = .56); Perceived Threat (alpha = .58); Expectation to Prevent Pregnancy (alpha = .60); Self-Control (alpha = .75); and Self-Efficacy (alpha = .79).

Directions: For each pair of choices below, show which you think is safer by marking your choice (either A or B) on your answer sheet. If you do not know, take a guess.

B) Unprotected sexual intercourse with a bisexual man.

Whaley, A. L. (1999). Preventing the high-risk behavior of adolescents: Focus on HIV/AIDS transmission, unintended pregnancy, or both? Journal of Adolescent Health, 24, 376–382.