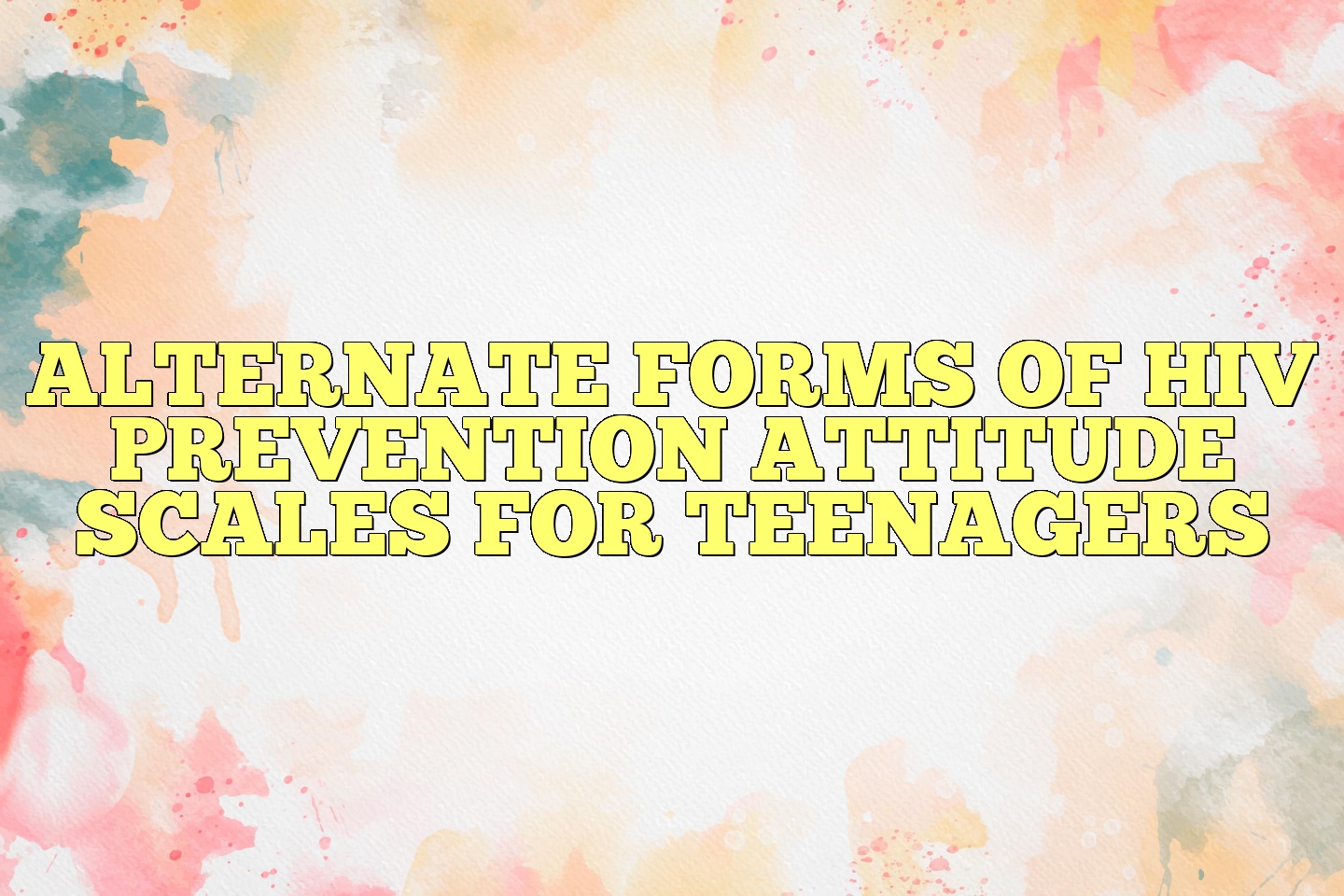 The lack of valid devices for measuring attitudes toward HIV prevention for adolescents has remained an obstacle to HIV/AIDS education evaluation. Many national authority groups, such as the National Research Council (Coyle, Boruch, & Turner, 1989), have recognized the importance of construction of reliable survey questionnaires in evaluating HIV prevention programs. In addition to knowledge and behavioral outcomes, it is imperative to determine attitude status and how it changes in health education settings.

Research indicates that attitudes are best described as multidimensional, having the three components of cognitive (belief), affective (feeling), and conative (intention to act; Ajzen & Fishbein, 1980; Kothandapani, 1971; Ostrom, 1969). This model has been successfully applied in measurement of attitudes toward alcohol among teenagers (Torabi & Veenker, 1986), prevention of cancer for college students (Torabi & Seffrin, 1986), and sexually transmitted diseases (Yarber, Torabi, & Veenker, 1989).

In testing situations, especially for test-retest design, there is a need for parallel, equivalent, or alternate forms of tests. Tests are considered to be parallel whenever their information functions are identical (Timminga, 1990).

For most of educational evaluation using pretest/posttest design, the use of alternate forms is preferred over single forms. Our purpose was to develop alternate, attitude- scale forms, using the three-component model, to measure adolescents’ attitudes toward HIV and prevention of HIV infection.

A large pool of Likert-type items was generated, guided by a table of specifications using a three-component attitude theory and conceptual areas related to HIV and HIV prevention. A preliminary scale with 50 items was prepared and reviewed by a jury of experts. The jurors provided feedback regarding clarity and content validity. Following revision, the preliminary scale was administered to 210 Midwestern high school students. After extensive item analyses, two comparable forms with 15 maximally discriminatory items were identified. These alternate forms were simultaneously administered to a representative sample of 600 teenagers in a Midwestern high school. Data were subjected to various techniques of item analysis, factor analysis, and reliability estimation.

The item analysis results provided strong evidence of internal consistency and comparability. The item correlation coefficients were positive and statistically significant for both forms. Additionally, the normative data regarding means, the standard deviations of item scores, and the total scale scores for the two forms were comparable.

Respondents indicate whether they strongly agree, agree, undecided, disagree, or strongly disagree to each statement. It takes about 10 minutes to complete the scale.

The minimum and maximum possible points for each form are 15 and 75 points, with higher scores indicating more positive attitudes toward HIV and HIV prevention.

Evidence of content validity was provided by using a jury of experts, table of specifications, and factor analysis procedures. The factor analyses of both forms identified reasonably comparable factor structures for each form, indicating further evidence of content validity and comparability. It would have been ideal to provide evidence of criterion-related validity by surveying actual behaviors or practices. However, due to serious resistance to assessing minors’ sexual and injecting drug behaviors, no such data were obtained.

Because the evidence of validity and reliability of the alternate forms were obtained from a sample of predominantly White, in-school student, the forms may not be very appropriate for minority or out-of-school youth.

The scales may be utilized for needs assessment and evaluation of HIV/AIDS education measuring teenagers’ attitudes toward prevention of HIV infection. The alternate forms are probably more suitable to pretest/posttest HIV education evaluation design.

Directions: Please read each statement carefully. Record your immediate reaction to the statement by blackening the proper oval on the answer sheet. There is no right or wrong answer for each statement, so mark your own response. Use the below key:

Example: Doing something to prevent getting HIV is the responsibility of each person.

Directions: Please read each statement carefully. Record your immediate reaction to the statement by blackening the proper oval on the answer sheet. There is no right or wrong answer for each statement, so mark your own response. Use the below key:

Example: Doing something to prevent getting HIV is the responsibility of each person.

Ostrom, T. M. (1969). The relationship between the affective, behavioral, and cognitive components of attitude. Journal of Experimental Psychology, 5, 12–30.