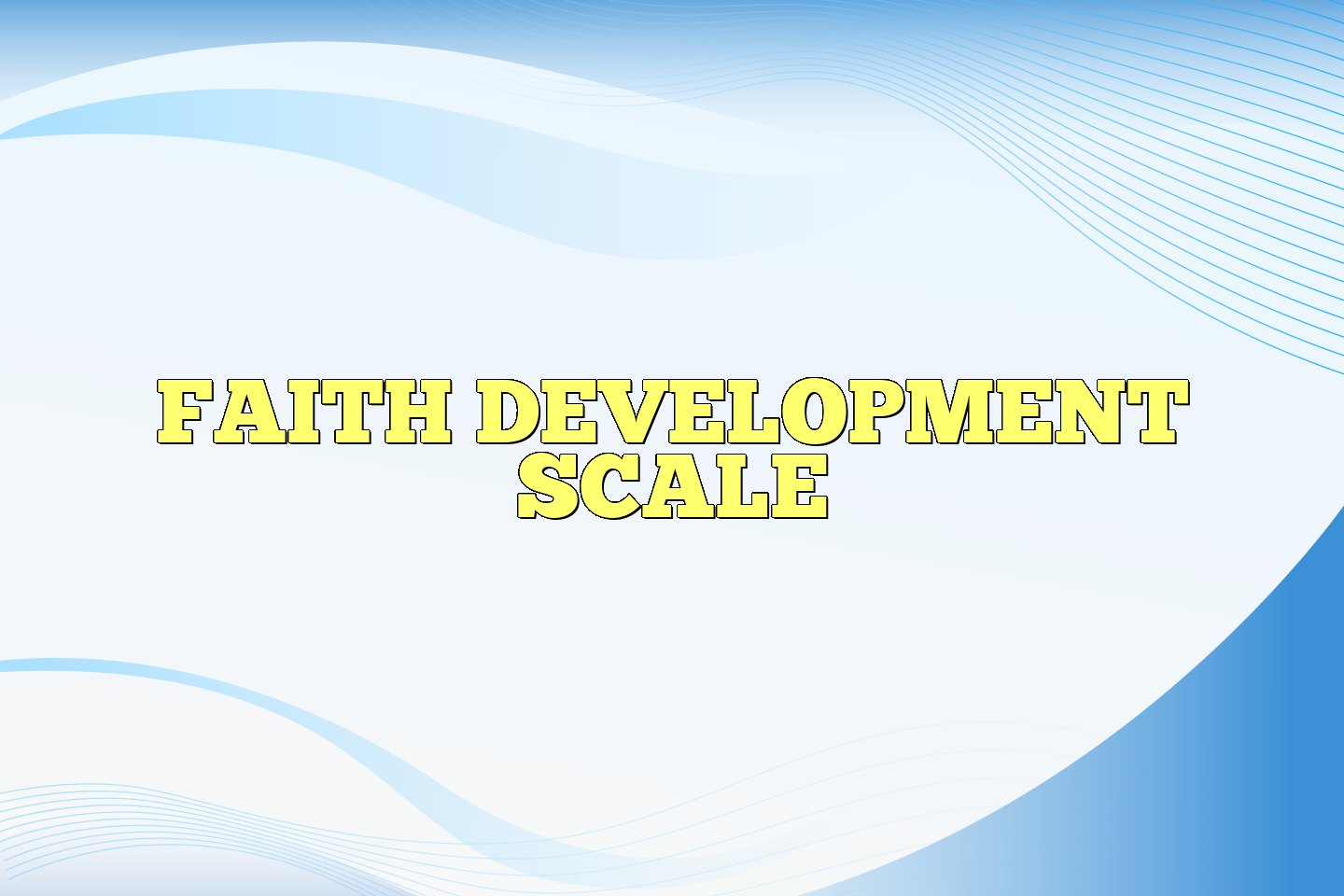 James Fowler's Faith Develop­ment Scale is based on (1981, 1991a, 1991b) his theory of faith development that parallels Erik Erikson's psycho-social, Jean Piaget's cognitive, and Lawrence Kohl­ berg's moral developmental theories. Fow­ler's faith development theory builds on the foundations set by cognitive and moral de­velopment, so that Fowler's proposition is an extension and elaboration of Piaget and Kohlberg's developmental stage theories. Fowler (1981) advanced the concept that individuals may hold the same beliefs in dif­ferent ways, some in very literal ways and others in a very symbolic, abstract fashion. He proposed that the most primitive style was the projective-intuitive faith of a little child. In the second stage, mythical-literal faith, the person accepts uncritically and lit­erally the traditional faith stories. In the third stage, synthetic-conventional faith, the individual aligns more explicitly with group religiosity and lives a more complex story. The fourth stage, individuative-reflective, employs a more abstract and individually reasoned universal form of faith. Individu­als exhibiting the fifth stage, the conjunctive stage, recognize the symbolic nature of truth. Only a few individuals achieve uni­versalizing faith in which motivation and vision so focus on justice and the needs of others that the self is decentered.

Fowler (1981) developed his stages of faith through an interview method­ ology. He failed to develop a quick, simple, reliable, and valid measure to assess one's stage of faith development. Barnes, Doyle and Johnson (1989) sought to develop an as­sessment instrument for faith development like that developed by Rest (1979, 1986) for Kohlberg's (1976) moral development the­ory. But rather than define faith in a stage orientation, Barnes, Doyle and Johnson (1989) described faith in terms of styles. The individual's score is determined by the nine sets of paired items. Each item repre­sents a faith "style" indicative of one of Fowler's faith stages.

The scale is an easy-to-administer paper and pencil test, but it could be given orally. The items require that the respondent has given some logical reflection to religion. The scale seemsin appropriate for individuals who have given lit­tle cognitive reflection to their participation in religion; agnostics, children, and individ­uals who are intellectually challenged could not be anticipated as providing reliable, valid self-assessments. Individuals whose religious experience is primarily affectively oriented might challenge the test's cognitive orientation. The scale may not effectively assess a behavioral orientation to religion.

The items were originally developed for a Catholic audience, but the item content re­lates to adults from the mainstream Catholi­cism and Protestantism. Using the scale with religious extremists may result in data of questionable utility. Individuals from a rigid, right-winged fundamentalist cult or from a left-winged liberal society may react adversely to item content rather than reveal their thinking preference. The God and Christ language renders the scale inappro­priate for a Hindu, Islamic, Jewish, or even non-western religious devotee. That is, some respondents might reject the theologi­cal tenets assumed in the scale's construc­tion.

Barnes, Doyle and Johnson (1989) tested the items on three groups of individuals who, they reasoned, should be different in their style of faith: members of a prayer group, parishioners from a Catholic congregation in Dayton, OH, and a group of college/seminary reli­gious studies teachers and theologians. The total usable sample was 576. They sug­gested that this grouping should differenti­ate individuals along a continuum from lit­eral faith to symbolic faith. They found that a discriminant analysis predicted member­ ship well in the norming groups (94% cor­rect prediction in the prayer group, 61% in the parish group, and 81% in the college/ seminary faculty group).

No findings are reported that suggest that the scale developers or those using it in subsequent research addressed the issue of reliability.

Barnes, Doyle and Johnson (1989) sought to establish concurrent validity by predicting membership in varying groups of faith style. That discriminant analysis study was described earlier. They also developed a survey of beliefs that varied along the literal-symbolic dimension. The survey of religious beliefs was comprised of twenty pairs of statements about essential church doctrine. One statement in each pair was literal, while the other was symbolic in form. Individuals identified as faith style

Goldsmith and Bayless (1991) reported a moderate correlation between the Fowler Faith Scale and Rest's Defining Issues Test, as would be anticipated by Kohlberg's and Fowler's theories. They also found that indi­viduals with a more intrinsic orientation to religion had a more symbolic expression of faith. Those of higher faith stages were less dogmatic. Similar results were reported in a later study (Goldsmith, Bayless, & Hines, 1992).

*The number in parentheses indicates the Fowler stage ("style" here) that the statement is intended to identify. The respondents were asked to express a preference for one of the two statements on each of the nine items.

Fowler, J. (1981). Stages of faith: The psychol­ogy of human development and the quest for faith. San Franciso: Harper and Row.