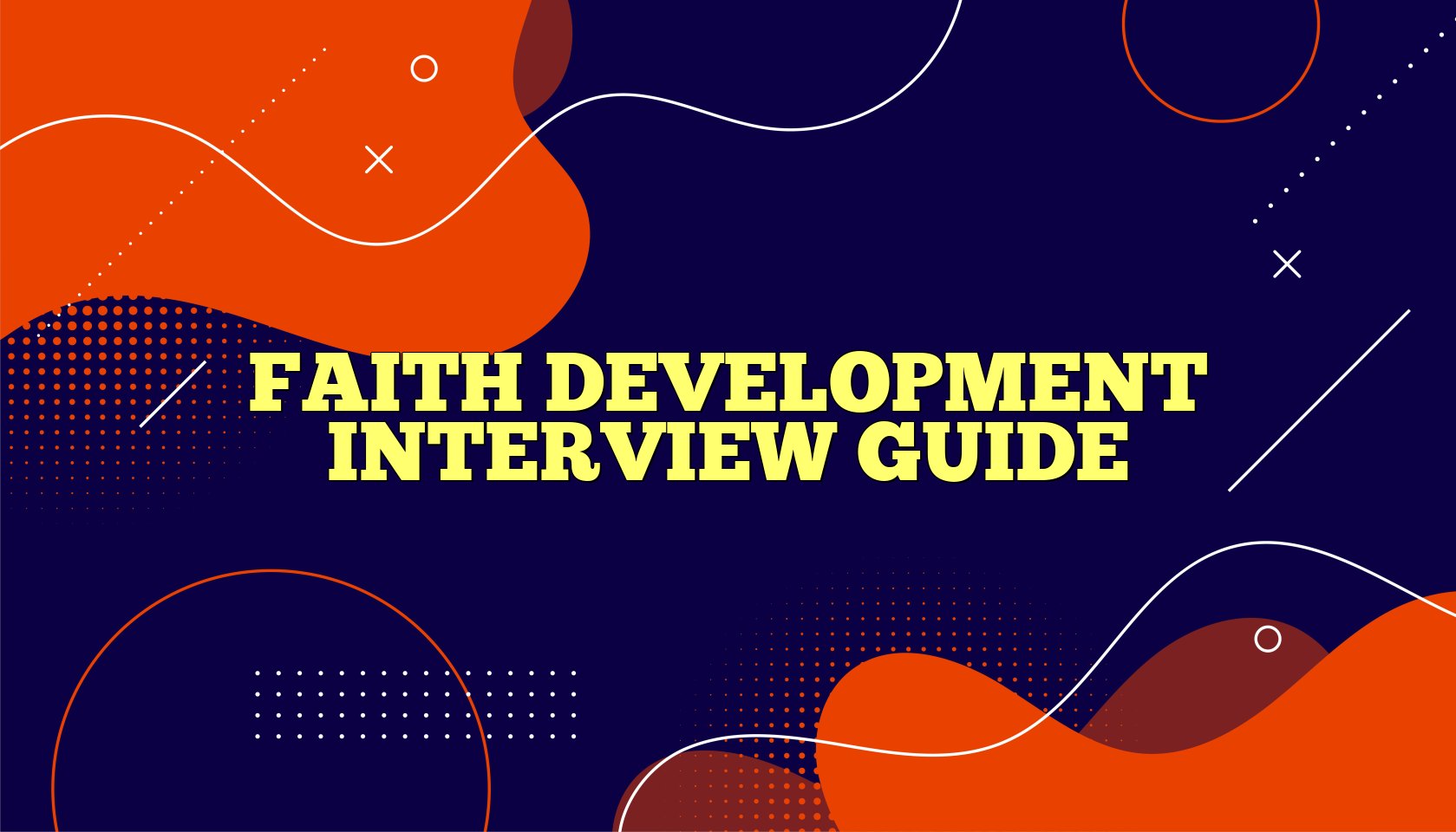 The Faith Development Interview Guide provides a basic outline for a semi di­rective interview, the purpose of which is to determine an individual's global level of faith development. In this context, the term "faith" refers to the process by which an in­ dividual constructs a personal framework for making the world coherent and mean­ingful. This process-oriented conceptualiza­tion thus does not focus on the framework's content per se but rather on how its various components are assembled and maintained. As such, explicitly religious frameworks are subsumed by, but not exhaustive of, the faith domain.

In the tradition of structural­ developmental theorists such as Piaget, Kohlberg, and Erikson, Fowler's (1981) faith development theory postulates that an individual's maturation with respect to tack­ ling the universal human task of meaning construction is subject to identifiable stages that are "invariant, sequential, and hierar­chical" in nature (Fowler, 1996, p. 169). That is, although a given individual will not necessarily progress through all the stages of faith, he or she will go through them in a specified order, never making the transition to a "higher" stage before necessary earlier stages are experienced. Throughout this process, previous stages are assimilated but not obliterated.

Fowler postulated seven stages of faith, although his assessment approach is de­ signed to tap only six. Thus, "Primal Faith"-or what Fowler (1994) later refers to as "Undifferentiated Faith"-defined in term's of an infant sense of basic trust and immediate sensory experience, remains but an inferred starting point in his approach. In Stage 1, or Intuitive-Projective Faith, the child-aided by newly acquired language and a blossoming imagination-begins to grasp the possibilities inherent in symbols, develops a rudimentary self-awareness, and is powerfully affected by stories and experiences with caregivers. In Stage 2, or Mythic-Literal Faith, the engrossment with stories-predominantly those endorsed by one's culture-continues; although the child's capacity to distinguish between fan­tasy and reality improves, story learning and telling remain rather concrete, as is his or her adherence to rules (moral and other­ wise). In Stage 3, or Synthetic-Conventional Faith, interpersonal awareness is suffi­ciently developed to ensure a central influ­ential role of peers, significant others, and authority figures; the (adolescent or older) individual is now capable of assuming an ideology which becomes the basis for val­ues and ethics, although the ideology is more inherited (from one's social surround) than created (through personal reflection). Stage 4, or Individuative-Reflective Faith, is typified by an emergent awareness of incon­sistencies inherent in one's inherited world­ view as it is subjected to critical analysis; rationality and self-sufficiency are enshrined as reference groups and their shared symbols are dethroned. The central theme of Stage 5, Conjunctive Faith (or Paradoxical­ Consolidative Faith in Fowler, 1994), might be characterized as reconciliation: Instead of dealing with the tension inherent in para­ dox by compartmentalization as in Stage 4, boundaries-both intrapersonal and inter­ personal-are dissolved as much as possible and prior, seemingly disparate, themes are allowed to intermix freely; symbols are em­ braced anew, with a concurrent appreciation of their validity and incompleteness. Fi­nally, in the "Universalizing Faith" of Stage 6, the reconciliation begun in Stage 5 is per­fected sufficiently that the individual's vi­sion of the interconnectedness of self, oth­ers, and planet is translated into a contagious call for transformation of social conditions, a role roughly corresponding to the Eastern and Western concepts of "bod­hisattva" and "prophet," respectively.

The Faith Development Interview Guide presented herein (from Fowler, 1981) should be regarded as just that: a guide, sample, or starting point. It is highly unlikely that me­chanical administration of the questions con­tained therein can yield information of suffi­cient quantity or quality to determine the individual's level of faith development with any confidence. Rather, a successful inter­ view likely requires considerable clinical acumen, as well as familiarity with the the­ ory and the cultural context (see Snarey, 1991) in order to know when and how to di­rect the interviewee, and attend to the under­ lying meanings in his or her responses.

Scoring of faith development interviews is described in detail in Moseley, Jarvis, and Fowler (1993; also see Fowler, 1981, pp. 217-268, 307-310, for an annotated exam­ple and brief overview). Only an oversimpli­ fied sketch can be offered in this volume. In general, taped interviews are transcribed and then inspected for themes, both in terms of specific contents and underlying process(es). More specifically, a stage score is assigned to an interviewee for each of seven different aspects of faith (see Fowler, 1981, pp. 244-245, for a tabular summary). Form of logic refers to the characteristic decision rules used in reasoning about issues of faith and meaning. Perspective taking involves the individual's relative capacity for seeing himself or herself from the standpoint of ei­ther an interpersonal other or a third party. Form of moral judgment refers to one's foundation for ethics. Bounds of social awareness are concerned with an individ­ual's degree of incorporation of diverse experiences into the process of meaning con­struction. Locus of authority refers to one's primary source of guidance and/or approval. Form of world coherence is concerned with an individual's degree of awareness of the subjectivity and internal consistency of his/her assumptions. Finally, symbolic func­tioning focuses on the depth and malleability of meaning(s) associated with an individual's core symbols. An individual's scores on the seven aspects of faith are then aver­ aged to yield a global faith development stage score ranging from 1 to 6, including half-stage or transitional scores, e.g., 4/5.

Practical consid­erations associated with administration and scoring of the Faith Development Interview Guide should not be taken lightly. As noted above, a considerable degree of clinical acumen and interviewing skill, along with fa­miliarity with faith development theory, is needed to conduct each interview. Fowler (1994) estimated that 1-3 hours of contact time are required for each interview, with the average being somewhat lower for chil­dren. Although optional, transcription of each taped interview is strongly recom­mended. Scoring requires thorough famil­iarity with the scoring manual (Moseley et al., 1993); moreover, Fowler (1981) recom­mends at least three reads of a given tran­ script before assigning scores. To ensure ac­ curacy and provide an index of interrater reliability, a co-rater is also required. Thus, research involving the Faith Development Interview Guide should be planned with the utmost care, for it is both time and labor in­ tensive (see also "Validity").

Fowler's (1981) original sample consisted of 359 predomi­nantly White women and men, ages ranging from 4 to 84. Nearly half were Protestant and slightly more than one-third were Catholic, with the balance comprised of Jewish and "other" respondents. Because faith stages are assumed to correspond-al­beit roughly-with chronological age, age­ stage distributions are discussed under "Validity" below.

Snarey (1991) reported an inter­ rater reliability of .88, which he claimed to be fairly typical. He also reported an inter­nal consistency (based on the seven aspects of faith scores) of .93, which he admitted may be inflated somewhat by the raters' de­ sire to appear self-consistent. This caution notwithstanding, interrater reliability and internal consistency taken together are im­ pressive, given the relative complexity of the scoring procedure.

Fair empirical support exists for the validity of the Faith Development Interview Guide. In Fowler's (1981) original sample, an overall positive, if weak, relationship be­ tween age and faith stage was observed. Modal stages for the age groups represented in the sample were: 1 for 0-6 years; 2 for 7-12 years; 3 for 13-20 years; 4 for 21-30 years; 3 for 31-40 years; 4 for 41-50 years; 3 for 51-60 years and 4 for 61+ years. More­ over, no Stage 5 individuals occurred below the 31-40 age group. Overall, these data are consistent with Fowler's contention that ad­vancing age is a necessary but not sufficient condition for advanced faith stage develop­ment. At the same time, it must be remem­bered that the data are cross-sectional and are thus not capable of ruling out possible cohort effects. Fowler (1994) reported that a five-year longitudinal study was underway in the early 1990s; thus, it remains to be seen whether strong support for the "invariant se­quence" hypothesis of faith development theory is supported.

Snarey's (1991) study made several im­portant contributions to the validity of faith development constructs and the related as­sessment procedure. First, the distribution of faith stage scores in his sample of 60 pre­ dominantly atheistic current or former dwellers in an Israeli kibbutz was similar to that of a comparable theistic sample, suggest­ing that the faith development conceptual scheme is not biased in favor of traditional (theistic) religion. Second, faith stage scores were moderately positively correlated with both moral and ego development scores, sug­gesting that both of the latter are related to, but not redundant with, the former. More­ over, faith stage was positively correlated with the presence of subtle versus obvious symbols of Jewish identity in the intervie­wees' dwellings, consistent with Fowler's (1981) postulation that symbol systems are employed in a more flexible, abstract manner at higher levels of faith development.

Snarey (1991) also found the average faith stage of former kibbutz dwellers who moved to Israeli cities to be higher (4.2) than the average among current kibbutz dwellers (3.8); former kibbutz dwellers who moved to North American cities averaged in between these two groups (4.0) and did not significantly differ from either. Snarey interpreted this finding as supportive of the construct validity of the faith development assessment approach, suggesting that the heterogeneous, cosmopolitan environment of Israeli cities provided exposure to diver­ sity-essential fodder for advanced faith de­ velopment-that was less salient in the more homogeneous environment of the kibbutz. This finding, in combination with ob­ served positive correlations between faith stage scores and variables such as level of education and social class, raises concerns about possible intellectualist and classist bi­ases inherent in the faith development framework, however (see Leak & Randall, 1995). That faith development theory is sub­ject to these sorts of criticisms is not unique. Indeed, this seems to be an inevitable out­ come of positing an invariant series of stages culminating in an idealized endpoint (see Wulff, 1997, pp. 401-405, for a review of conceptual criticisms): Moral develop­ ment theory has been similarly criticized. It remains to be seen whether faith develop­ment theory can withstand the ideological criticisms of this sort it has provoked.

Fowler, J. W. (1981). Stages of faith: The psy­chology of human development and the quest for meaning. San Francisco: Harper & Row.

Comment: There is little question that faith development theory is an exceedingly rich, if complex and value-laden, theoretical frame­ work. One can present hardly more than a caricature of it in the space allotted herein. Ironically, its greatest strength-attention to individuals' meaning-making life journeys in narrative detail-is its greatest weakness, for the investment required has apparently re­sulted in the empirical investigation of faith development lagging far behind armchair discussion. Quickening the empirical pace is thus a vital task for future researchers.

Fowler, J. W. (1981). Stages of faith: The psy­chology of human development and the quest for meaning. San Francisco: Harper & Row.