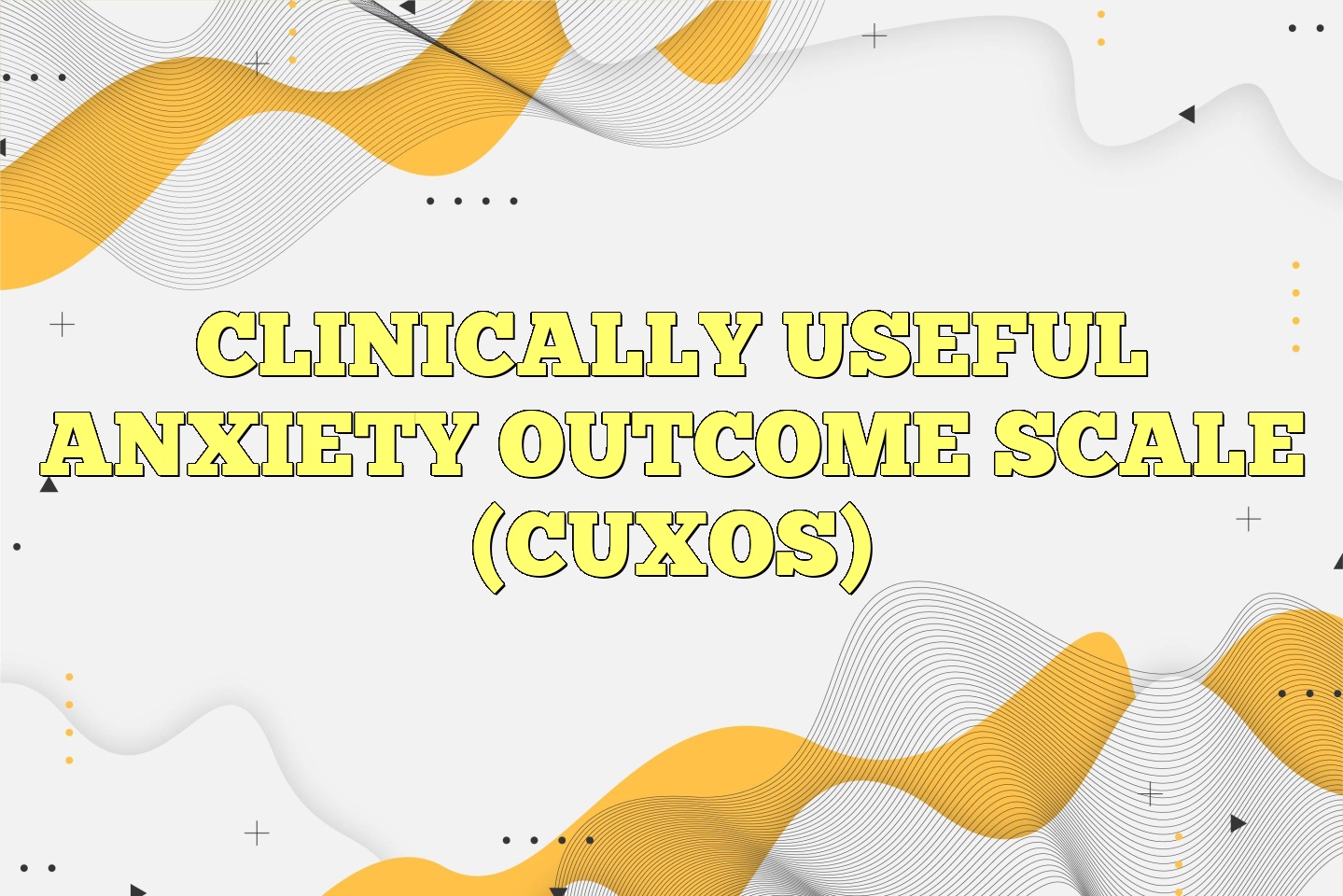 The Clinically Useful Anxiety Outcome Scale (CUXOS) is a brief 20-item self-report measure designed to assess the severity of anxiety symptoms in adults with a diagnosed anxiety disorder or depression (D’Avanzato et al., 2013; Zimmerman, Chelminski, Young, & Dalrymple, 2010). The CUXOS can be used as a screening tool or to monitor and evaluate symptom changes over the course of treatment, as it is sensitive to change (Beidas et al., 2015).

Developed in 2010, the CUXOS item content is based on the DSM-III-R and DSM-IV descriptions of Generalised Anxiety Disorder and Panic Disorder (Zimmerman et al., 2010). The items are derived from the Hamilton Rating Scale for Anxiety (1959), whilst the structure of the measure is based on the Clinically Useful Depression Outcome Scale (2008). The CUXOS is compromised of two subscales; the psychic anxiety subscale consisting of 6-items (“I felt scared”), and the somatic anxiety subscale containing 14-items (“I was sweating”). Each item is rated on a Likert-type scale from zero (“not at all true”) to four (“almost always true”), with total scores ranging from zero to 80 (<10 non-anxious; 11-20 minimal anxiety; 21-30 mild anxiety; 31-40 moderate anxiety; 41+ severe anxiety). On average, clients completed the measure within two minutes and clinicians scored the scale within 15 seconds (Zimmerman et al., 2010). The efficient nature of this measure is an advantage when considering using it as a screening tool or to monitor symptom change over time.

The CUXOS’ solid psychometric properties are also an advantage. The initial validity study included 963 patients, 556 with a diagnosed non-comorbid anxiety disorder and 407 with no current anxiety disorder (Zimmerman et al., 2010). The study demonstrated strong internal consistency for the total scale (Cronbach α = 0.95) and each subscale (α = 0.90 for the psychic anxiety subscale, and α = 0.93 for the somatic anxiety subscale). The test re-test reliability of the total scale was also strong (r=0.90).

In terms of convergent and divergent validity, the CUXOS correlated more highly with other measures of anxiety (median r=0.54) than with scales measuring other symptom domains (median r=0.32). The CUXOS’ ability to discriminate between severity levels was also investigated via an analysis of variance conducted with the Social Avoidance and Distress Scale (SADS) severity ratings in relation to the CUXOS’ ratings. Higher SADS severity ratings correlated significantly with higher CUXOS ratings of severity.

Whilst the psychometric properties reported in the Zimmerman et al. (2010) study are promising, little research has been conducted on different demographic features and varied clinical populations. At this stage there is only one other validity study concerning the CUXOS. Jeon et al. (2017) conducted a study with 838 psychiatric outpatients during intake, using a Korean adaptation of the CUXOS. The study found similar psychometric properties as reported by the original study, with a high internal consistency (Cronbach α = 0.90) and a test re-test reliability of r=0.74. Jeon et al. also found that the CUXOS was more highly correlated with other measures of anxiety (mean r= 0.74) than with measures of the other symptom domains (mean r= 0.53).

Based on the current literature, the CUXOS is a valid and reliable brief assessment tool. The CUXOS can be readily incorporated into clinical practice given the efficiency and ease of administering and scoring. However, there are limitations. The scale is not extensively researched and the impact of individual difference factors has not been explored rigorously. Additionally, clinicians should be mindful that item content is based on the DSM-III-R and DSM-IV definitions of anxiety disorders and some symptoms of distress may be underreported if triggers are being avoided by client e.g. phobic objects may have not been encountered that week.