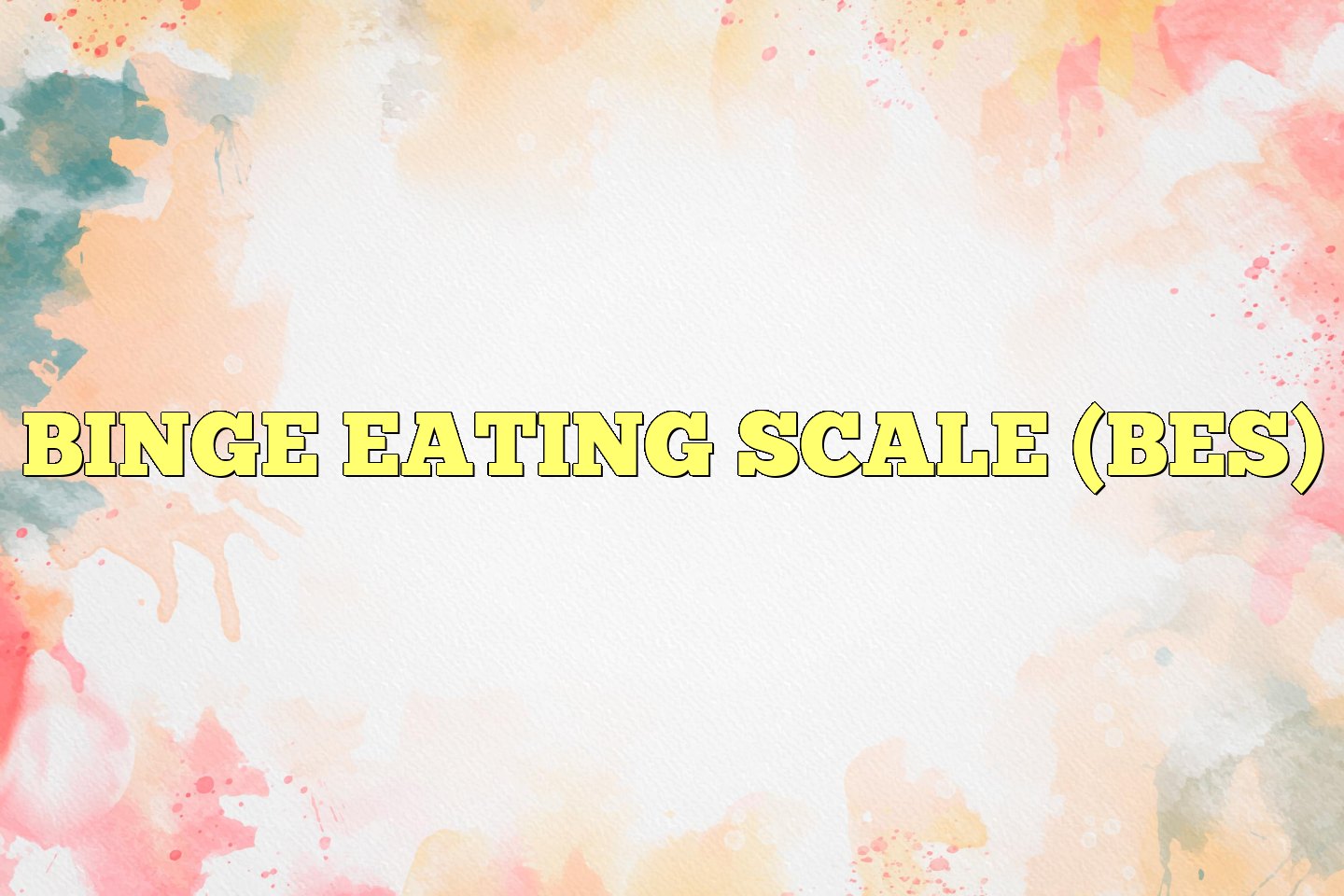 Regardless of its wide use, research on the dimensionality and psychometric properties of the BES, remains scarce. Also, most studies examining the validity of the scale have been conducted with obese women seeking or undergoing weight loss treatments (Hood et al., 2013). In particular, the adequacy of this scale and its psychometric properties in nonclinical samples is unknown. The current study aimed at examining the BES factorial structure through a confirmatory factor analysis, and its validity in a large sample of women from the Portuguese general population. Furthermore, the current study assesses the distribution of the severity of binge eating symptoms, and the sensitivity and specificity of the BES in discriminating clinically significant binge eating.

Binge eating scale (BES; Gormally et al., 1982). The BES comprises 16 items measuring key behavioural (e.g., rapid eating, eating large amounts of food), and affective/cognitive symptoms (e.g., guilt, feeling out of control or unable to stop eating) that precede or follow a binge. Each item contains 3 to 4 statements that are weighted response options, which reflect a range of severity for each measured characteristic. Participants are asked to select the statement that best describes their experience. Example:

Eating Disorder Examination 16.0D (EDE 16.0D; Fairburn et al., 2008; Ferreira, Pinto-Gouveia, & Duarte, 2010). The EDE is an investigator-based semi- structured clinical interview that provides a comprehensive assessment of the frequency and intensity of key behavioural and psychological aspects of eating disorders. It comprises four subscales that reflect the severity of eating psychopathology: Restraint, Eating Concern, Weight Concern and Shape Concern. A global score may be obtained by calculating the mean of the subscales’ scores. Furthermore, the EDE allows for a thorough assessment of the specific psychopathology of patients with binge eating, such as the presence and frequency of binge eating episodes, features associated with binge eating (e.g., eating much more rapidly than normal), and distress over the episode. The administration of the EDE requires an experienced interviewer and takes 60-90 minutes. Research has shown that EDE presents high values of internal consistency, discriminant and concurrent validity, and test–retest reliability (for a review see Fairburn, 2008). The Portuguese version of the EDE (Ferreira et al., 2010) was used in the current study as a diagnostic measure in a subsample of 150 participants. The EDE presented a high internal consistency, with Cronbach’s alpha values ranging from .74 to .90 in the subscales, and of .94 in the total score.

Eating Disorder Examination Questionnaire (EDE-Q; Fairburn & Beglin, 1994; Machado, Martins, Vaz, Conceição, Bastos, & Gonçalves, 2014). The EDE-Q is the self-report version of EDE, providing a similarly comprehensive assessment of disordered eating behaviours. The EDE-Q comprises 36 items focusing on the past 28 days and provides the same four subscales of the EDE that reflect eating psychopathology severity. Research also supports that EDE-Q presents good psychometric properties (Fairburn, 2008). In this study, the Portuguese version of the EDE-Q (Machado et al., 2014) was used, which presented a Cronbach’s alpha value of .95, and the subscales presented values ranging from .76 to .92. Emotional eating scale (EES; Arnow et al., 1995; Portuguese version by Duarte & Pinto-Gouveia, 2014). The EES is a self-report measure that assesses the tendency to overeat in response to emotional stimuli. It includes 25 distinct emotions (e.g., discouraged, irritated, angry) that comprise 3 subscales – Anger/Frustration, Anxiety, and Depression. Participants are asked to rate, using a 5- point Likert scale (ranging from 0 = “no desire to eat” to 4 = “an overwhelming urge to eat”), the degree to which they desire to eat in response to each mood state. For the purpose of this study, only the total score of the EES was considered. The scale presented good construct and discriminant validity as well as good internal consistency (Arnow et al., 1995). The scale also revealed good psychometric properties in its Portuguese version (Duarte & Pinto-Gouveia, 2014). The scale revealed very good internal consistency in this study, with a Cronbach’s alpha of .92. Depression Anxiety and Stress Scales – 21 (DASS21; Lovibond & Lovibond, 1995; Portuguese version by Pais-Ribeiro, Honrado, & Leal, 2004). The DASS21 measures levels of Depression, Anxiety and Stress symptoms. The scale comprises 21 items with the 3 subscales including 7 items each. Participants are asked to rate the frequency, using a 4-point Likert scale (0 = “Did not apply to me at all” to 3 = “Applied to me very much or most of the time”), with which they experience the symptoms. Higher scores reflect increased levels of psychopathology symptoms. The scale shows adequate internal consistency in its original and Portuguese versions (Lovibond & Lovibond, 1995; Pais-Ribeiro et al., 2004). Cronbach’s alpha values of .87, .84 and .90 were verified in the current study for the subscales Depression, Anxiety and Stress, respectively. BMI. Participants’ BMI was calculated by dividing self-reported current weight (in kg) by height squared (in m).\\

Results indicated that the BES presented a Cronbach’s alpha value of .88. All items revealed moderate to high item-total correlations (above .42, with the exception of item 13, which revealed a correlation of .27), pointing out the quality and suitability of the items. Furthermore, the removal of any item would not increase the internal consistency of the scale .

The scale’s reliability was further examined through the Composite Reliability (CR) and Average Variance Extracted (AVE), which were manually calculated using the respective formulas (Fornell & Larcker, 1981). Results revealed a CR of .96, which indicate very good construct reliability. Regarding the AVE, results indicated a value of .61, confirming the instrument convergent validity.

Results indicated that when applying the cut-off score of ≤ 17, the proportion of correctly classified cases was 96.7%. The BES showed a sensitivity value of 81.8% and a specificity value of 97.8%. The results of the ROC curve (Figure 1) confirmed that the BES presents an excellent precision in the detection of clinically significant cases of binge eating in the general population, with an area under the curve (AUC) of .90 (CI = .76, 1.00; p < .001; Hosmer & Lemeshow, 2000).