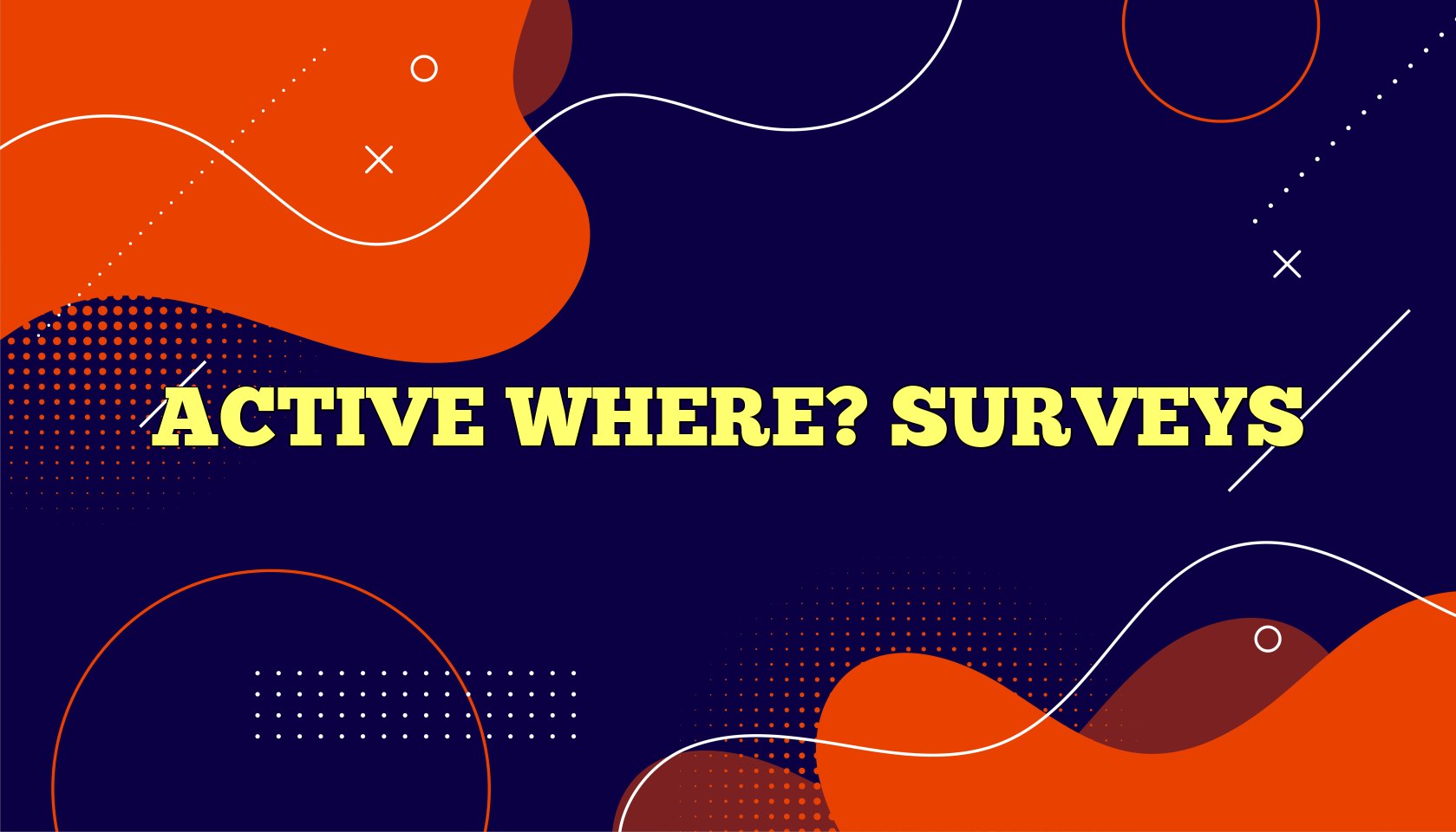 The Active Where? Study was designed to develop measures to understand how the physical environment impacts physical activity and eating behaviors related to chronic diseases, such as obesity, among children and youth. This study started with individual interviews with children and parents ‘in situ’, thus allowing researchers to observe and interact with youth while using neighborhood and park environments. This formative work was designed to generate appropriate items.

A set of quantitative survey measures was developed to assess home, neighborhood, park, and school environments to be completed by parent-child dyads, parent-adolescent dyads, or adolescents. A reliability study was conducted in 3 U.S. cities, which increased the generalizability of findings, and most of the measures performed well. The study resulted in self-report environmental measures that are relevant to youth of a very wide range of ages and will supplement the adult instruments currently used in national and international research. The Active Where? Study was a collaborative project comprising three locations: San Diego, Cincinnati Children’s Hospital Medical Center, and Boston Children’s Hospital.

The surveys have been tested for reliability (see Reliability Report)

The Active Where? Surveys assess home, neighborhood, park, and school environments related to physical activity and eating. There are separate questionnaires to be completed by parent and child together, parent and adolescent together, and adolescents individually.

ACTIVE WHERE? PROJECT METHODS AND OVERVIEW

The Active Where? Study was designed to develop new measures of environmental correlates of diet and physical activity specifically for youth. The environments of interest were home, community, and school. Three different sites were involved in this study in order make the findings more generalizable. These sites were in: San Diego, California; Cincinnati, Ohio; and Boston, Massachusetts. A survey was administered to a sample of adolescents, parents of these adolescents, and parents of a sample of children. The study was supported by Active Living Research (ALR), a program of the Robert Wood Johnson Foundation.

The Active Where? Surveys can be found at the following address:

The Active Where? Study took place in San Diego, Boston, and Cincinnati.

Participants included adolescents age 12-19 years old and a parent of the adolescent. Both adolescent and parent completed the same surveys on two occasions approximately 2 weeks apart.

Data were collected from three cities to enable a range of environments, weather conditions, ethnic diversity and levels of neighborhood walkability. A sprawl score for each metropolitan area shows how much the housing is spread out, homes are segregated from other places, they have only weak centers of activity, and they have poorly connected street networks (McCann, Ewing, Smart Growth, 2003). A recent study found a correlation between BMI and sprawl indicating that people who live in more sprawling communities are more likely to be heavier than people who live in more compact communities (McCann, 2003 pg13). A higher sprawl index score indicates lower sprawl. The cities in this study received the following sprawl scores respectively; Cincinnati 96, San Diego 101.9, and Boston 126.9 (Smart Growth America). These differences highlight the variations between the cities included in this study, particularly the impact the variation may have on eating and physical activity, allowing for more generalizable results. Slight variation also occurred in the recruitment methods used at each site. Each site obtained approval from the appropriate Institutional Review Board (IRB). Differences in the IRB approval process and resources of each site determined the methods used. The use of varying cities and recruitment methods ensured a wide range of participants in this study.

One week prior to recruitment at community centers and local events fliers with information on the study, contact information, and dates when researchers would be at each location were hung in the participating centers. The researchers then attended local events and recreation centers in each of the four quadrants where they explained the study, answered questions, and gave participants packets with required materials.

The packet included a survey for the adolescent and for the parent, assent and consent forms, contact information, information on the study, and a pre-paid return envelope.

Participants were able to fill out the survey at their own convenience.

Phone numbers of parents with adolescents’ age 12-17 who lived in the pre-selected quadrant neighborhoods were obtained from a local marketing company. Participants were contacted without a letter and asked to participate in the study. Once a person agreed to participate in the study the packet described in the previous section was sent to the participant by mail. They were then able to go over the information, fill out the survey, and return finished materials at their own convenience.

Using a list of phone numbers available to researchers, families who had an adolescent age 12-17 and lived in the pre-selected neighborhoods were sent letters with information on the Active Where? Study. A follow-up call was administered to the possible participants to determine their desire to participate in the study. Those who agreed to participate and were eligible were sent surveys and consent forms in the mail. At completion of each survey, participants returned surveys and consent forms in pre-paid envelopes.

Researchers left information about the Active Where? Study for children and adolescents at local community centers to take home to parents. One week following, researchers came to the community center and administered surveys for the adolescents who agreed to participate and who had a signed consent form from parents. Parents returned completed survey by mail.

A phone list provided by the YWCA Youth Voice Collaborative was used to contact possible participants in the study. A letter with information on the study was sent to each possible

participant. A-follow up phone call was then administered to determine interest in participation. Once a person agreed to participate in the study, a packet of materials was sent to the participant. The participant filled out the survey and consent forms and returned the survey in a pre-posted envelope.

Both adolescent and parent completed the same surveys on two occasions to evaluate the test- retest reliability of the survey instrument over time. Physical activity, fruit and vegetable consumption and height and weight (used to calculate BMI and BMI percentiles) were also reported in order to assess survey validity. The parents and adolescents completed the same items in order to assess differences in perception and establish which group would be a more reliable source of data for perceived neighborhood environment. Approximately one week after receipt of the original survey a second survey was sent to each participant, to enable a 2 week test retest period. The dates of the first and second survey completion and receipt were recorded. After 10 days, the researchers placed a reminder call to participants for the second survey.

Immediately following receipt of the retest survey, a gift card was sent to the participant. Upon receipt, the survey responses were received and a research assistant attempted to obtain missing information (if applicable) from participants by phone. Data were entered into an Access form. The data were then checked for correct entry by hand and by a double entry procedure.

The survey was developed through formative research (i.e., phone interviews and in vivo interviews with a different sample of children and adolescents and their parents) and adaptation of previous measures. Items were discussed with experts for face validity. The survey was pilot tested in all sites among parents and adolescents and amended to improve understanding and readability. Surveys took 30-45 minutes to complete. Following the survey introduction, age, gender, height and weight were reported.

The survey(s) included the following sections:

point scale, ranging from None to All.

Individual item test-retest reliability analysis was performed for each survey. Results can be found at the following address: