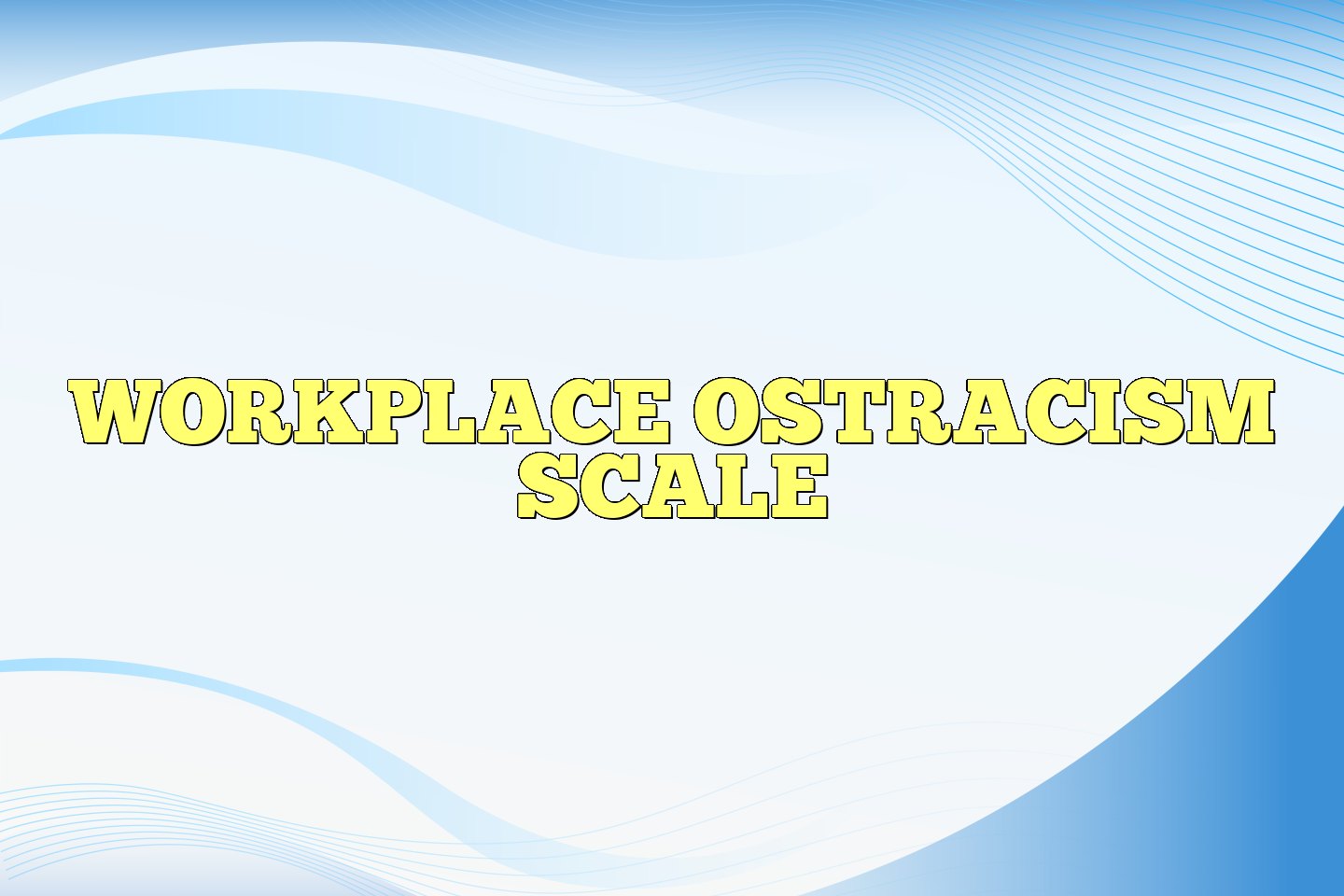 Despite some early studies on the concept of rejection (e.g., Jackson & Saltzstein, 1958; Schachter, 1951; Snoek, 1962), the research on ostracism could best be characterized as piecemeal and infrequent until fairly recently (K. D. Williams, 2001). This over- sight is unfortunate, as ostracism represents a common human experience familiar to many. Ostracism has been part of human life since the beginnings of recorded history, when the ancient Greeks would vote to ostracize individuals from their communities as a form of punishment (K. D. Williams, 1997). Exile and banishment represent extreme and complete forms of ostracism, but the phenomenon is also represented by less dramatic behaviors (e.g., using the silent treatment or avoiding eye contact); the more the individual perceives that he or she is being subjected to such behaviors, the more the individual feels that he or she is being ostracized. Ostracism need not be intentional or punitive; in many instances, we may ignore coworkers because we are engrossed in our own work (K. D. Williams, 2001). Indeed, one of the aversive aspects of ostracism is that it is often ambiguous whether one is actually being purposefully ostracized (K. D. Williams, 1997).

Regardless of the motives underlying ostracism, it is a painful and aversive experience. In studies with functional magnetic resonance imaging, the same brain structures activated during physical pain were activated after the individual experienced social rejection; this finding suggests that ostracism causes a sense of “social pain” (N. I. Eisenberger, Lieberman, & Williams, 2003; MacDonald & Leary, 2005). Given the evolutionary advantages that groups provide, K. D. Williams and Zadro (2005) have argued that the experience of pain in response to ostracism represents an adaptive response that alerts us if something is wrong and prompts us to remedy the situation. Supporting this notion, studies have found that we appear to detect ostracism indiscriminately, regard- less of extenuating or discounting circumstances, such as being told that others have been instructed to ignore us (Zadro, Williams, & Richardson, 2004). Similarly, whether one is being ostracized by in-group or out-group members does not seem to moderate the effects of ostracism (K. D. Williams, Cheung, & Choi, 2000); even ostracism by a hated out-group, such as the Klu Klux Klan, has a negative impact on individuals (Gonsalkorale & Williams, 2007). These studies have been taken to suggest that we appear to be biased to detect ostracism, even false positives, perhaps because the potential consequences associated with actual ostracism can be severe (e.g., loss of the resources, protection, and mate access that groups provide). Thus, ostracism by a single individual or a group, be it friend or foe, is likely to be detected by and to have a negative impact on the individual.

Aside from its capacity to cause social pain, ostracism is aversive in that it simultaneously threatens four fundamental human needs: the need for self-esteem, the need to belong, the need for control, and the need for a meaningful existence (K. D. Williams, 1997, 2001, 2007). These four needs have a rich history in psychology, with different authors arguing that these needs, either separately or in combination, underlie all aspects of social behavior (see, e.g., Baumeister, 1994; Baumeister & Leary, 1995; Baumeister & Tice, 1990; Branden, 2001; Greenberg, Pyszczynski, & Solomon, 1986; Pyszczynski, Greenberg, & Solomon, 1999; Pyszczynski, Green- berg, Solomon, Arndt, & Schimel, 2004; Seligman, 1975; Taylor & Brown, 1988; Tesser, 2000). Ostracism impacts an individual’s sense of belongingness by threatening to remove the individual from the group. Research has found that even minimal forms of ostracism, such as exclusion from a computerized ball-toss game, can reduce the sense of belonging (Williams et al., 2000) and lessen the individual’s identification with a group (Hogg & Abrams, 1988; Tajfel & Turner, 1986). Individuals who are ostracized feel that they have done something wrong or that there is something inherently unappealing about themselves, which threatens their sense of self-esteem (K. D. Williams, 2001). When individuals are ostracized, their sense of control is undermined, in that their actions prompt no reaction from others, and they have no way of effecting an end to the ostracism (K. D. Williams, 1997; Zadro et al., 2004). Finally, ostracism represents a form of “social death” (Sommer, Williams, Ciarocco, & Baumeister, 2001) and provides a preview of what life would be like if one did not exist. Such cues of mortality and death threaten one’s sense of a meaningful existence (Pyszczynski et al., 2004).

In addition, ostracism has been shown to cause maladaptive responses. Experimental laboratory research on social exclusion has found that people who are excluded are more likely to be aggressive, both toward those who excluded them and towards uninvolved others (Twenge, Baumeister, Tice, & Stucke, 2001). They are also less likely to engage in prosocial or helpful behaviors (Twenge, Baumeister, DeWall, Ciarocco, & Bartels, 2007) and more likely to engage in self-defeating behaviors, such as procrastinating and making poor choices (Twenge, Catanese, & Baumeister, 2002). It has been suggested that the effect of ostracism on our ability to self-regulate, or our ability to alter our behavior to comply with social standards and achieve goals, is responsible for these maladaptive behaviors (Baumeister, DeWall, Ciarocco, & Twenge, 2005). Studies have shown that, when excluded, individuals enter into a deconstructed cognitive state with minimal self-awareness, a focus on the present, and no concern for long-term goals (Twenge, Catanese, & Baumeister, 2003). More- over, exclusion has been shown to impair logical reasoning (Baumeister, Twenge, & Nuss, 2002). Being self-aware and being able to comprehend the long-term consequences associated with our own actions are important components of self-regulation (Carver & Scheier, 1981). Thus, it is perhaps unsurprising that ostracized individuals display a variety of behaviors indicating their inability to self-regulate (Baumeister et al., 2005).

Note. On the basis of Bass, Cascio, and O’Connor (1974), we used a seven-point Likert-type response scale

An asterisk indicates that an item was not included in the final scale.