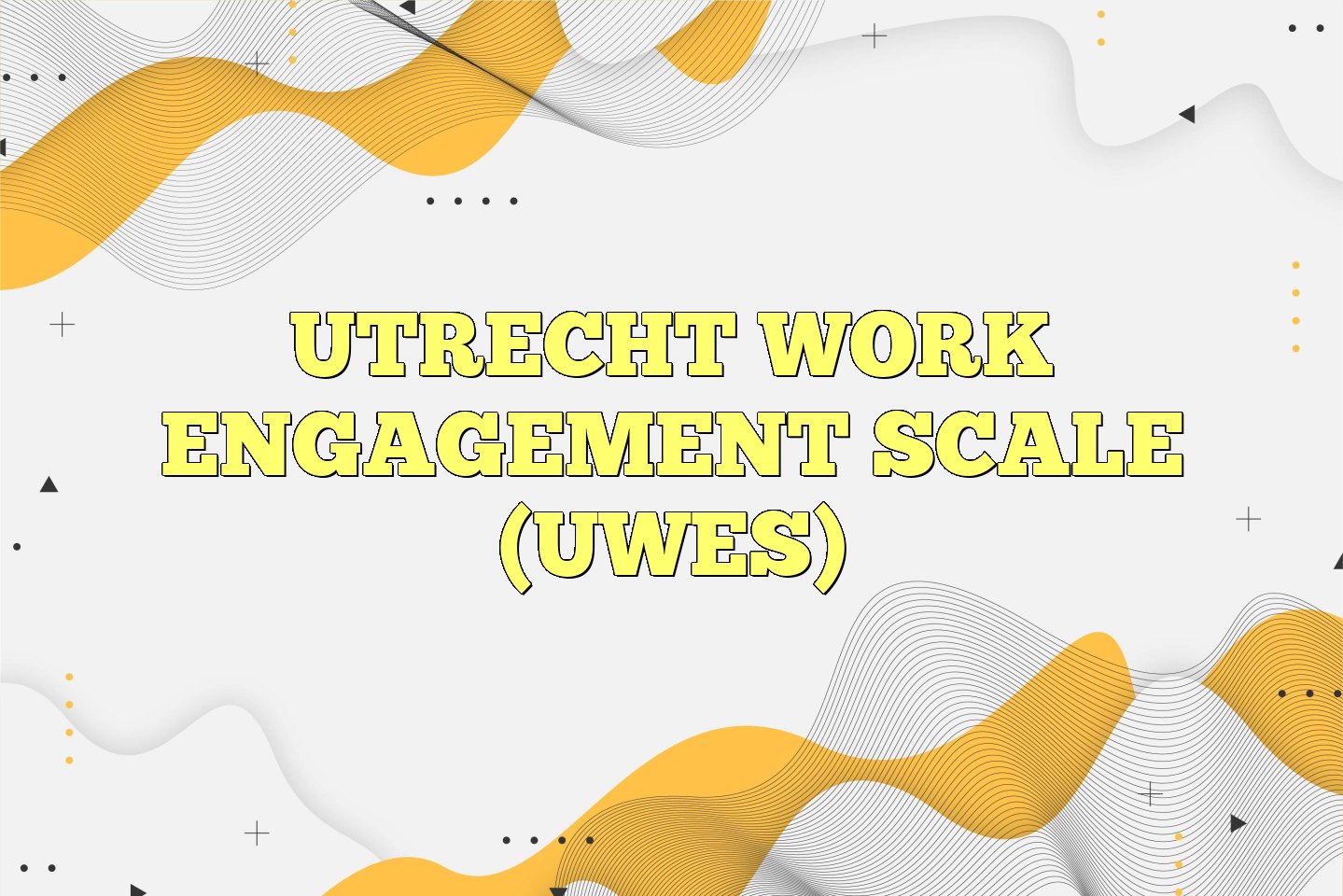 Work engagement is the assumed opposite of burnout. Contrary to those who suffer from burnout, engaged employees have a sense of energetic and effective connection with their work activities and they see themselves as able to deal well with the demands of their job. Two schools of thought exist on the relationship between work engagement and burnout. The first approach of Maslach and Leiter (1997) assumes that engagement and burnout constitute the opposite poles of a continuum of work related well-being, with burnout representing the negative pole and engagement the positive pole. Because Maslach and Leiter (1997) define burnout in terms of exhaustion, cynicism and reduced professional efficacy, it follows that engagement is characterized by energy, involvement and efficacy. By definition, these three aspects of engagement constitute the opposites of the three corresponding aspects of burnout. In other words, according to Maslach and Leiter (1997) the opposite scoring pattern on the three aspects of burnout – as measured with the Maslach Burnout Inventory (MBI; Maslach, Jackson & Leiter, 1996) – implies work engagement. This means that low scores on the exhaustion- and cynicism-scales and a high score on the professional efficacy scale of the MBI is indicative of engagement.

However, the fact that burnout and engagement are assessed by the same questionnaire has at least two important negative consequences. First, it is not plausible to expect that both concepts are perfectly negatively correlated. That is, when an employee is not burned-out, this doesn’t necessarily mean that he or she is engaged in his or her work. Reversibly, when an employee is low on engagement, this does not mean that he or she is burned-out. Secondly, the relationship between both constructs cannot be empirically studied when they are measured with the same questionnaire. Thus, for instance, both concepts cannot be included simultaneously in one model in order to study their concurrent validity.

For this reason we define burnout and work engagement are two distinct concepts that should be assessed independently (Schaufeli & Bakker, 2001). Although employees will experience work engagement and burnout as being opposite psychological states, whereby the former has a positive quality and the latter a negative quality, both need to be considered as principally independent of each other. This means that, at least theoretically, an employee who is not burned-out may score high or low on engagement, whereas an engaged employee may score high or low on burnout. In practice, however, it is likely that burnout and engagement are substantively negatively correlated. In contrast to Maslach and Leiter’s (1997) approach, our approach enables the assessment of the strength of the association between work engagement and burnout since different instruments assess both independently. It is possible to include both constructs simultaneously in one analysis, for instance, to investigate whether burnout or engagement explains additional unique variance in a particular variable after the opposite variable has been controlled for.

‘Engagement is a positive, fulfilling, work-related state of mind that is characterized by vigor, dedication, and absorption. Rather than a momentary and specific state, engagement refers to a more persistent and pervasive affective-cognitive state that is not focused on any particular object, event, individual, or behavior. Vigor is characterized by high levels of energy and mental resilience while working, the willingness to invest effort in one’s work, and persistence even in the face of difficulties. Dedication refers to being strongly involved in one's work and experiencing a sense of significance, enthusiasm, inspiration, pride, and challenge. Absorption, is characterized by being fully concentrated and happily engrossed in one’s work, whereby time passes quickly and one has difficulties with detaching oneself from work’ Accordingly, vigor and dedication are considered direct opposites of exhaustion and cynicism, respectively. The continuum that is spanned by vigor and exhaustion has been labeled energy or activation, whereas the continuum that is spanned by dedication and cynicism has been labeled identification (Schaufeli & Bakker, 2001). Hence, work engagement is characterized by a high level of energy and strong identification with one's work. Burnout, on the other hand, is characterized by the opposite: a low level of energy combined with poor identification with one's work.

As can be seen from the definition above, the direct opposite of the third aspect of burnout – professional inefficacy – is not included in the engagement concept. There are two reasons for this. First, there is accumulating empirical evidence that exhaustion and cynicism constitute the core of burnout, whereas lack of professional efficacy seems to play a less prominent role (Maslach, Schaufeli & Leiter, 2001; Shirom, 2002). Second, it appeared from interviews and discussions with employees and supervisors that rather than by efficacy, engagement is particularly characterized by being immersed and happily engrossed in one's work – a state that we have called absorption. Accordingly, absorption is a distinct aspect of work engagement that is not considered to be the opposite of professional inefficacy. Based on the pervious definition, a self-report questionnaire – called the Utrecht Work Engagement Scale (UWES) – has been developed that includes the three constituting aspects of work engagement: vigor, dedication, and absorption.

The development of the Utrecht Work Engagement Scale (UWES)

Originally, the UWES included 24 items of which the vigor-items (9) and the dedication-items (8) for a large part consisted of positively rephrased MBI-items. For instance, ’’When I get up in the morning, I feel like going to work’’ (vigor) versus ’’I feel tired when I get up in the morning and have to face another day on the job’’ (exhaustion) and ’’I am enthusiastic about my job’’ (dedication) versus ’’I have become less enthusiastic about my work’’ (cynicism). These reformulated MBI-items were supplemented by original vigor and dedication items, as well as with new absorption items to constitute the UWES-24 . After psychometric evaluation in two different samples of employees and students, 7 items appeared to be unsound and were therefore eliminated so that 17 items remained: 6 vigor items, 5 dedication items, and 6 absorption items (Schaufeli, Salanova, González-Romá & Bakker, 2002a). The resulting 17-item version of the UWES is included in the Appendix. Subsequent psychometric analyses uncovered two other weak items (AB06 en VI06), so that in some studies also a 15-item version of the UWES has been used (e.g., Demerouti, Bakker, Janssen & Schaufeli, 2001). The databases that are analyzed for this test-manual include the UWES-15 as well as the UWES-17 (see 4.1 and 5.1).

The results from psychometric analyses with the UWES can be summarized as follows:

Factorial validity. Confirmatory factor analyses show that the hypothesized three-factor structure of the UWES is superior to the one-factor model and fits well to the data of various samples from The Netherlands, Spain and Portugal (Salanova, Schaufeli, Llorens, Pieró & Grau, 2000; Schaufeli et al., 2002a; Schaufeli, Martínez, Marques-Pinto, Salanova & Bakker, 2002b; Schaufeli, Taris & Van Rhenen, 2003). However, there is one exception, using explorative factor analyses Sonnentag (2003) found did not find a clear three-factor structure and decided to use the total-score on the UWES as a measure for work engagement.

Cross-national invariance. The factor structure of the slightly adapted student version of the UWES (see 4.9) is largely invariant across samples from Spain, The Netherlands and Portugal (Schaufeli et al., 2002b). Detailed analyses showed that the loadings of maximum three items differed significantly between the samples of the three countries.

Stability. Scores on the UWES are relatively stable across time. Two, year stability coefficients for vigor, dedication and absorption are .30, .36, and .46, respectively (Bakker, Euwema, & Van Dierendonk, 2003).

In sum: these psychometric results confirm the factorial validity of the UWES – as expected, the UWES consists of three scales that are highly correlated. Besides, this pattern of relationships is observed among samples from different countries, which confirms the cross-national validity of the three-factor solution. Taken together this means that engagement is a construct that consists of three closely related aspects that are measured by three internally consistent scales.

The psychometric quality of the UWES

Below, results on the psychometric quality of the UWES are reported using a Dutch language database, consisting of Dutch and Flemish studies among different occupational groups, as well as an international database that includes data from various countries. First, the psychometric analyses of the Dutch language database are presented, followed by that of the international database. A similar structure is used in both cases: first the composition of the database is discussed and next the results are presented of analyses regarding the distribution characteristics of the items, the internal consistencies of the subscales, the factor structure of the UWES, the relationships with burnout, age, and gender, and the differences between professional groups (in the Dutch database) and between countries (in the international database). Finally, a short version of the UWES is presented, as well as a slightly adapted version for students.

Table 3 shows the internal consistencies (Cronbach's ) of the scales of the various versions of the UWES (for the short UWES-9, see 4.7). The -values have been computed for the total database as well as for the individual studies. Table 3 displays the range of  as well as its median (Md). The latter is based on 15 studies (N = 9.679) as far as the UWES-9 and UWES-15 is concerned, whereas the median is based on the remaining 11 studies (N = 2.313) as far as the UWES-17 is concerned. As can be seen from Table 3, the internal consistencies are quite good for the short version as well as for both longer versions. Moreover, internal consistencies are well above the criterion of .60 that is recommended for newly developed measurement instruments (Nunnaly & Bernstein, 1994).

Table 3: Cronbach's of the UWES-scales

Note. * The dedication scales of the UWES-15 and the UWES-17 are identical.

Schaufeli‚ Wilmar B.‚ Bakker‚ Arnold B.‚ Salanova‚ Marisa. (2006). The Measurement of Work Engagement With a Short Questionnaire A Cross-National Study. Educational and Psychological Measurement August; 66(4): 701-716