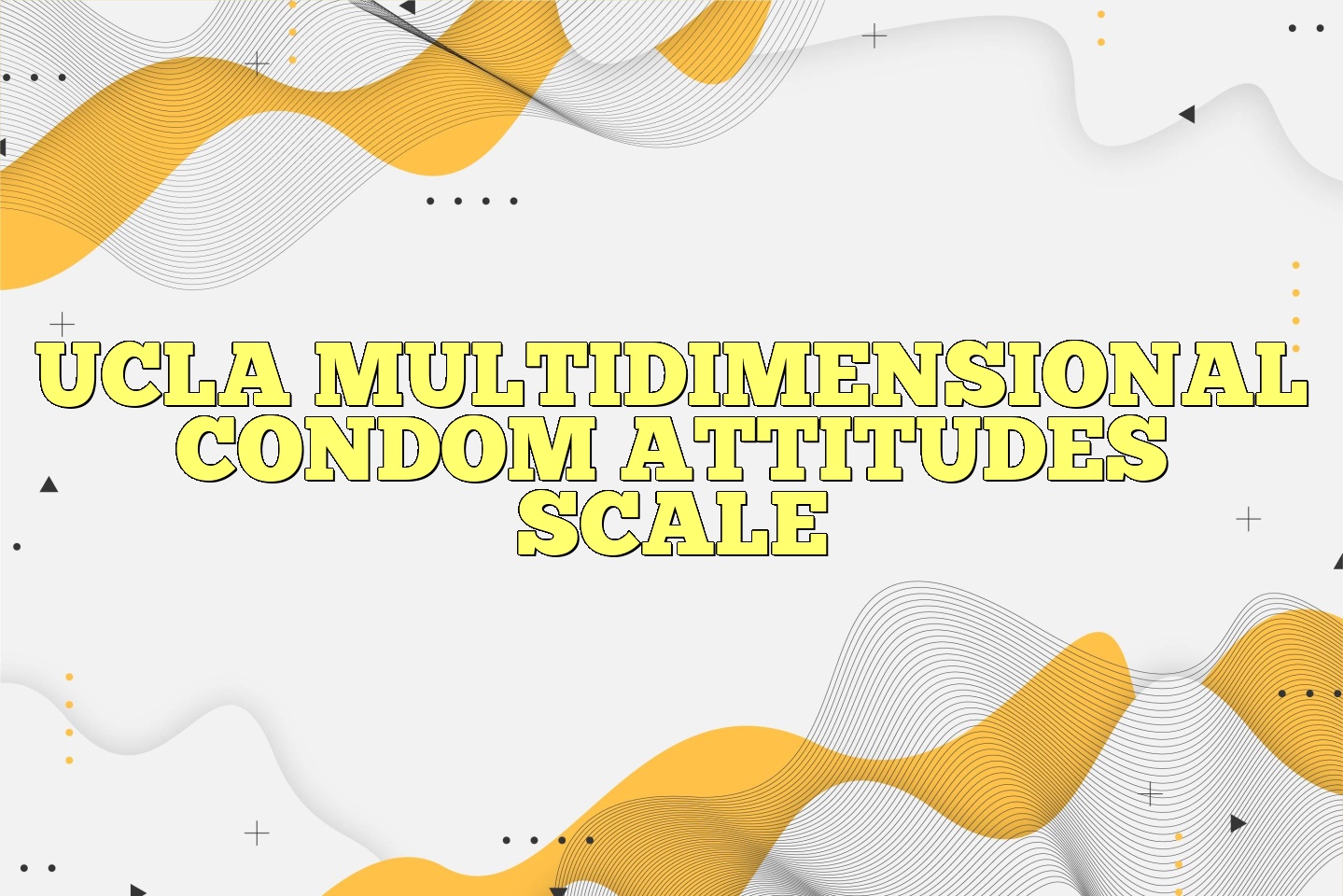 The purpose of the UCLA Multidimensional Condom Attitudes Scale (MCAS) is to measure condom attitudes in five independent areas: (a) the reliability and effective- ness of condoms, (b) the sexual pleasure associated with condom use, (c) the stigma associated with people proposing or using condoms, (d) the embarrassment about negotiating and using condoms, and (e) the embarrassment about purchasing condoms. The scale can be used with individuals who do and do not have personal experience with condoms.

The 25-item MCAS assesses five independent factors associated with condom use. The MCAS was found to be reliable and valid in three studies using ethnically diverse samples of UCLA undergraduates (Helweg-Larsen & Collins, 1994). As of August 2008 it had been cited 97 times; the scale has been used in 31 of these articles (see companion website at www.routledge.com/text- books/9780415801751 to view the complete list). The scale has been used with a range of populations, such as HIV-positive individuals from urban clinics in California (Milam, Richardson, Espinoza, & Stoyanoff, 2006), Chinese and Filipina American college women (Lam & Barnhart, 2006), sexually active adult cocaine or heroin users (Rosengard, Anderson, & Stein, 2006), cocaine- abusing, opioid-dependent HIV-positive adults entering a methadone program (Avants, Warburton, Hawkins, & Margolin, 2000), individuals in a large public psychiatric hospital diagnosed primarily with schizophrenia and mood disorders (Weinhardt, Carey, & Carey, 1997), American Indian men in New York City who identified as gay/bisexual/two-spirit and heterosexual (Simoni, Walters, Balsam, & Meyers, 2006), and HIV-positive Zambian women (Jones, Ross, Weiss, Bhat, & Chitalu, 2005). Furthermore, the MCAS has been translated to Spanish (DeSouza, Madrigal, & Millan, 1999; Unger & Molina, 1999), Japanese (Kaneko, 2007), and various Zambian languages such as Bemba, Nyanja, and Nsenga (Jones et al., 2005). Overall, the body of research using the MCAS shows that it has been a reliable and valid measure of condom attitudes in a wide range of participants. A complete list of studies which have used the MCAS may be found at the companion website for this book (http:// www.routledge.com/textbooks/9780415801751).

We found that the five dimensions of the MCAS cannot meaningfully be summed to generate a single global score because the factors are independent. The statistical independence of the five factors was established via factor analyses and confirmatory factor analysis in structural equation modeling which showed that a model with five independent factors was superior in fitting the data compared to a unidimensional model (all 25 questions averaged). Thus, it is important that the five factors are scored separately. If researchers do not have room to use all 25 questions, they may select one or several of the factors that they are particularly interested in and use all 5 questions in that factor. Another option is to select a few questions from each of the five factors; Table 1 in Helweg-Larsen and Collins (1994) shows factor loadings (separately for men and women) that can guide researchers in the selection of questions. Our research indicates that important information is lost if questions are added together across factors.

Our research also demonstrated the importance of examining condom attitudes separately for men and women. First, results indicated gender differences on several of the five factors; compared to women, men were less embarrassed about purchasing condoms but more concerned about stigma. Second, the MCAS factors showed different patterns of correlations with criterion variables for men and women. For example, women’s past condom use was not correlated with any of the five MCAS factors, whereas men’s past condom use was correlated with positive attitudes toward pleasure and embarrassment about buying condoms.

Some of the MCAS items are worded negatively (i.e., indicate a negative attitude toward condoms), and the score must therefore be reversed before adding or averaging the scores (higher scores will then indicate more positive condom attitudes). The scoring for these items is as follows:

We established construct validity for the MCAS by showing that gender and sexual experience were associated with the five factors of the MCAS (Helweg-Larsen & Collins, 1994). Furthermore, past and intended condom use was related to the five factors of the MCAS, again showing different patterns for men and women. The MCAS has also been validated in a sample of low-acculturated Hispanic women (Unger & Molina, 1999) and among Mexican undergraduate students (DeSouza et al., 1999).

Please respond to all questions even if you are not sexually active or have never used (or had a partner who used) condoms. In such cases indicate how you think you would feel in such a situation.

1. It is really hard to bring up the issue of using condoms to my partner.

2. Use of a condom is an interruption of foreplay.

3. Women think men who use condoms are jerks.

4. Condoms are an effective method of preventing the spread of AIDS and other sexually transmitted diseases.

5. I always feel really uncomfortable when I buy condoms.

7. When I suggest using a condom I am almost always embarrassed.

9. I think condoms are an excellent means of contraception.

10. I don’t think that buying condoms is awkward.

11. It is very embarrassing to buy condoms.

12. It is easy to suggest to my partner that we use a condom.‌

13. If a couple is about to have sex and the man suggests using a condom, it is less likely that they will have sex.

14. Condoms do not offer reliable protection.

16. I never know what to say when my partner and I need to talk about condoms or other protection.

17. It would be embarrassing to be seen buying condoms in a store.

18. People who suggest condom use are a little bit geeky.

19. The use of condoms can make sex more stimulating.

20. Condoms are an effective method of birth control.

21. I’m comfortable talking about condoms with my partner.

22. Men who suggest using a condom are really boring.

23. When I need condoms, I often dread having to get them.

24. A woman who suggests using a condom does not trust her partner.

25. Condoms are uncomfortable for both parties.

Source. Copyright © 1994 by the American Psychological Association. Adapted with permission. The official citation that should be used in referencing this material is Helweg-Larsen, M., & Collins, B. E. (1994). The UCLA Multidimensional Condom Attitudes Scale: Documenting the complex determinants of condom use in college students. Health Psychology, 13, 224–237.

Kaneko, N. (2007). Association between condom use and perceived bar- riers to and self-efficacy of safe sex among young women in Japan. Nursing and Health Sciences, 9, 284–289.