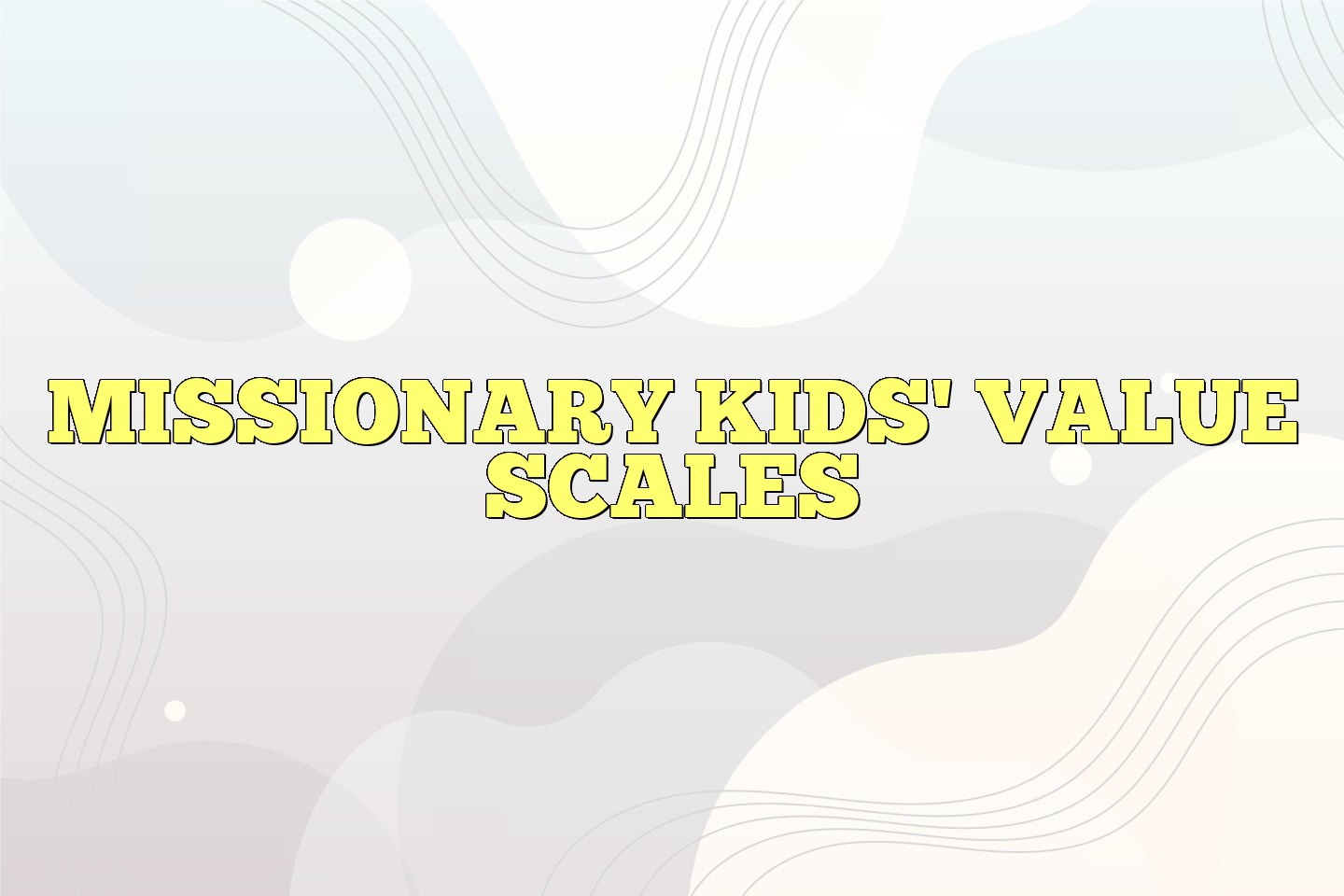 The Missionary Kids' Value Scales (MKVS) contains 18 measures of the value constructs of religiosity, worldmind­ edness, and commitment to justice, as well as different aspects of the cross-cultural context of individuals who have grown up overseas. The specific value constructs mea­sured are Religiosity, Religious Orthodoxy, Religious Action, Attitudinal Worldminded­ ness, World Systems, Social Distance, and Justice Commitment. The contextual scales are Religious Interaction as Youth, Reli­gious Interaction at School, Religious Inter­ action in the Home, Cross-Cultural Involve­ment as Youth, Cross-Cultural Interaction in School, Leadership, Justice Interaction as Youth, Parent-Child Relationship, Teacher­ Student Relationship, School Involvement, and School Rating. The measure was cre­ated specifically for use with children of missionaries in Brazil (referred to as "mis­sionary kids" or "MKs"), although it can easily be modified for use with MKs from other countries or other individuals who have lived cross-culturally.

The value scales make up the core of this instrument and will be reviewed briefly here. The Religiosity scale is a measure of a person's commitment to his or her religion. It is operationalized in this measure as com­mitment to the specific beliefs, values, and behaviors of evangelical Christianity. Reli­gious Orthodoxy is a measure of the degree to which a person agrees with the beliefs of orthodox Protestant Christianity. Religious Action is a measure of a person's willing­ ness to return overseas, either on a short­ term basis or for an indefinite period. The Attitudinal World mindedness scale mea­ sures attitudes and behaviors that demon­strate acceptance and tolerance of people from other cultures and value systems. World Systems measures a person's attitudi­nal acceptance of differing concepts of na­tional identity. Social Distance assesses an individual's willingness to become socially involved with different ethnic and socioeco­nomic groups, on a continuum ranging from minimal social contact to intermarriage. Justice Commitment is a measure of a per­ son's reactions to the poor and needy and is operationalized as frequency of actions to help these groups in the past 12 months. Particularly noteworthy among the contex­tual variables is the Crosscultural Involve­ment as Youth scale, which is a measure of behaviors and attitudes that demonstrate in­volvement with the foreign culture in which the individual has lived.

The measure is heterogeneous in that it is not intended to measure a related group of constructs. Rather, its intent is to survey many areas relevant to the life experi­ence of individuals who live in other cultures during their formative years. Of the 18 scales, only 6 are explicitly religious (Reli­giosity, Religious Orthodoxy, Religious Ac­tion, Religious Interaction-Youth, Religious Interaction-School, Religious Interaction­ Home). The remaining scales address behav­iors and attitudes related to living in a different culture. The Religiosity and World­ mindedness scales can be combined to mea­ sure the construct of World Christianity. This construct is not widely used in the social sci­ences but has commonly been used in evan­gelical missiology in recent years. Individu­als who demonstrate an expanded view of the world (in contrast to ethnocentrism) and a commitment to the values of historic Chris­tianity are considered World Christians.

The religiously oriented scales were con­ structed on the basis of items developed by King and Hunt (1972, 1975), Fichter (1954), Glock and Stark (1965), Bibby and Brinkerhoff (1973, 1983), and Brinkerhoff and Mackie (1985). The World mindedness items were drawn from a scale developed by Sampson and Smith (1957). Several contex­tual variables were drawn from the Interna­tional Mobile Student Questionnaire devel­oped by the Institute of International Studies at Michigan State University. For several of the scales within the overall measure, partic­ularly the religiously oriented ones, similar scales exist that have been much more exten­sively validated. The present measure does, however, make a unique contribution. Its pri­mary value lies in the comprehensiveness of the constructs surveyed, providing in one measure an array of constructs relevant to in­ternational populations. Researchers in this area can make use of individual scales as well as the complete measure.

Most items are forced choice and utilize a variety of types of 4- and 5-point Likert scales, including "strongly disagree" to "strongly agree," "never" to "very often," and "yes, definitely" to "no." A smaller number of items require rank ordering and yes/no answers. Each of the subscales is scored separately. No special instructions are provided for scoring.

The MKVS is a paper-and-pencil measure that does not re­ quire special examiner skill for administra­tion or interpretation. No instructions are provided for the subject, as each item is self-explanatory. The face validity of the measure is high, as each scale clearly relates to the construct it attempts to measure. Given the heterogeneity of the measure, one disadvantage is that the relationship of the different scales to each other is not clearly articulated. However, use of the entire in­strument is not necessary. An additional dis­ advantage is that many of the subscales have a variety of answer formats, which is awkward both for the respondent and for measurement purposes.

The internal consistency of the scales was estimated using Cronbach's coef­ficient alpha. The values for the scales were as follows: Religiosity, .93; Religious Or­ thodoxy, .86; Religious Action, .81; Attitu­dinal World mindedness, .64; World Systems, .59; Social Distance, .93; and Justice Commitment, .66. The Religiosity, Reli­gious Orthodoxy, Religious Action, and So­cial Distance scale alphas indicate good lower-bound estimates of scale reliability for research purposes. The remaining scales have marginal internal consistency. These figures do not support the use of this instru­ment for the testing of individuals, with the exception of the Religiosity and Social Dis­tance scales, which have high reliabilities. No test-retest reliability data are reported for this measure.

Each scale was submitted to an ex­ploratory factor analysis using principal fac­toring with iterations. An eigenvalue of 1.0 or higher was used as a cutoff, although "Religious Interaction in the Home" had an eigenvalue of .75 but was retained as an ex­ploratory variable. Loadings of the individ­ual items varied from .38 to .89. All items that did not load on the first factor of each scale were dropped, reducing the total num­ber of items from 171 to 88. The first factor explained 100 percent of the variance for each scale, except Religiosity in which it ac­ counted for 92.7 percent. All scales demon­strated internal consistency coefficients of .60 or higher except "Religious Interaction in the Home" (.45). The factor analysis of the scales provides moderate support for the construct validity of the individual scales. The relationships among the different scales, in the form of correlations, are available in the source reference. Convergent and divergent validity data are not reported for this measure.

One validity issue that is not addressed by the author is the uneven weighting of items in scales that have several response formats. For example, the Religious Interaction-Home subscale has three items, two of which have 4-point Likert scales, whereas the remaining item is in a yes/no format. Summing the re­sponses to arrive at a total score gives greater weight to the 4-point Likert items. While the MKVS is a helpful tool for measuring multi­ple variables of interest to those in missiology, the variety of constructs and ways of measuring them do present some measure­ment difficulties. Further reliability and va­lidity testing seems in order as researchers use this instrument in the future.

No further research has been done utiliz­ ing this measure.