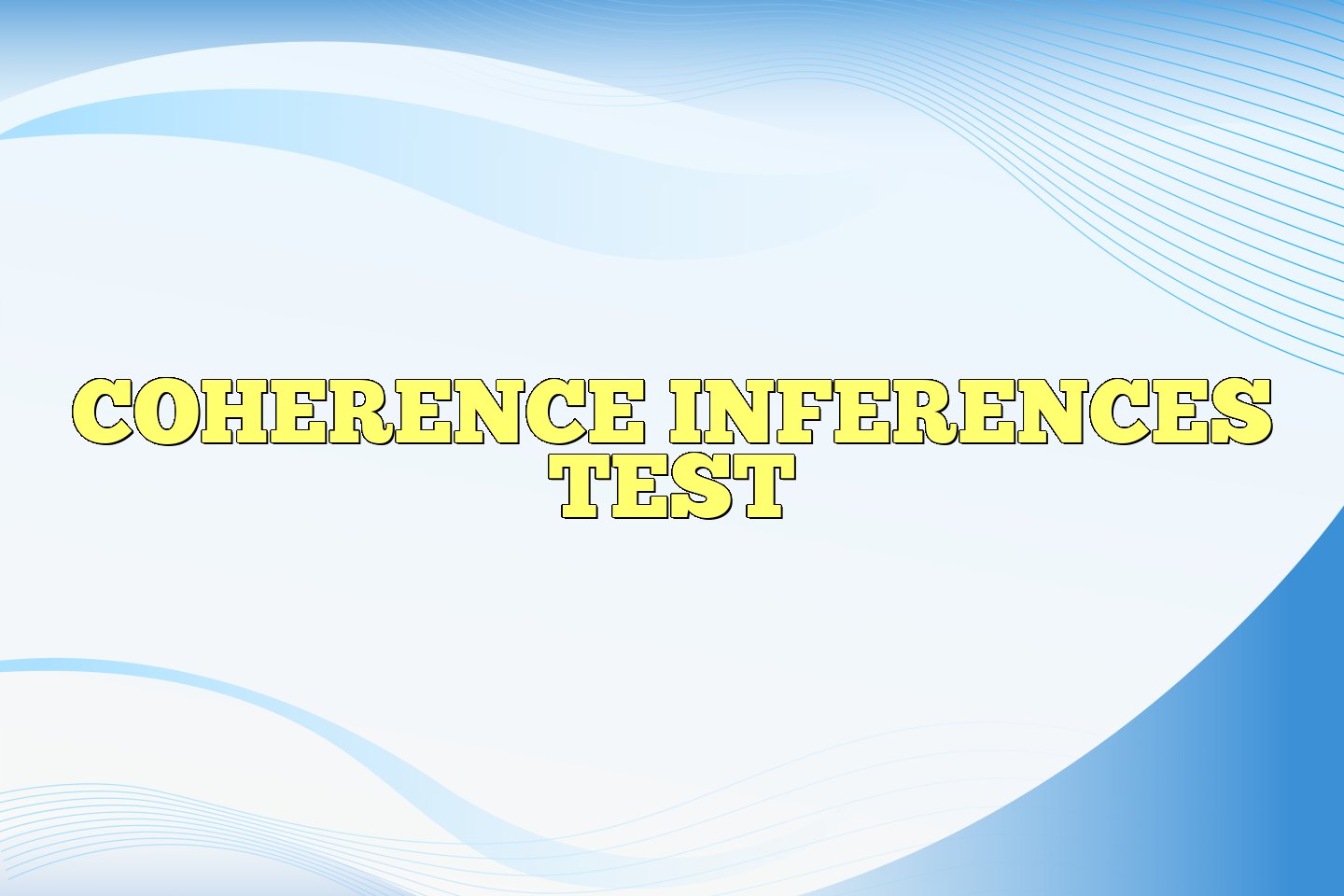 The Coherence Inferences Test adds to the literature on language impairments in autism. This test confirms that those with high-functioning autism spectrum disorders are impaired in local coherence.

MAKING FRIENDS WITH A HORSE or TAMING A WILD HORSE

Charlotte found a wild horse whilst living near some moor lands.

The horse would gallop away every time Charlotte would walk toward him. The horse slowly began to stay still when Charlotte approached him.
The horse then let Charlotte touch him for a second.

It was not long before Charlotte was able to pat and stroke the horse’s mane.

A MAN BUILDING HIS OWN HOUSE

At a local auction John bought a very large piece of land on which to build a house.

Builders arrived to dig the foundations of John’s house and soon there was a huge mound of earth.

The builders then set about building the walls and putting the windows in. It was not long before John could put the central heating in himself.
John’s wife ordered a new suite of furniture for their living room.

A CHILD STARTING SCHOOL FOR THE FIRST TIME

Amy was getting ready for her first day at school.

Amy started to cry when her mother left her with the teacher. The teacher was kind to Amy and gave her lots of new books.
Amy soon began to make friends with all the other children and started to join in their games.

When Amy was older she had to start at a new school.

Kevin ran out of his house to play football with the boy next door. Kevin tripped over a child’s scooter and came crashing down on the path.
Because Kevin wasn’t able to walk properly he spent the morning at hospital.

Kevin’s leg was in plaster for a number of weeks.

It was a while before Kevin could score goals again.

GETTING A PRESENT FOR A FRIEND

It was Michelle’s birthday so Patricia went into town to buy her a present.

Patricia went to buy a jewellery box, but was unable to find one.

Patricia walked along until she came to a record shop where she left clutching a
record.

Patricia wrapped up the record she had bought and cycled to Michelle’s house.

Michelle played the record several times on her birthday.

Janet was having a lovely holiday and was eating lots of ice cream.

Janet was getting herself ready for a party when she saw her party dress had become too tight.

Janet looked around the shops to get herself some larger sized clothes. Janet spent a lot of money and came back with a lot of new clothes.
Janet eventually lost the weight, only to find her clothes were now too big.

The Robinson family set off with their bags to go sightseeing abroad. They arrived at their hotel and collected the keys to their rooms.
The family travelled a long way to look at some old monuments.

Mrs Robinson’s camera ran out of film so they went looking for a shop to buy some more.

Mr. Robinson called on some friends to show them his family holiday photos.

It was a freezing cold day when Andrew went into his garage to start the car.

Andrew couldn’t get his car to work so he thumbed through the yellow pages for a taxi.

A taxi came to pick Andrew up but it was a quarter-of-an-hour late. Andrew hurriedly searched his pockets and paid the driver of the car. Andrew was about to see a film and only just made it on time.

A MAN PLANTING or GROWING AN APPLE TREE

Mr Edwards took out his gardening fork to dig over his back garden. Then Mr Edwards went to the nurseries to buy an apple tree.
Mr Edwards dug a big hole and planted his tree.

Mrs Edwards picked some apples from their tree to make an apple pie.

The fireman left his home in the late afternoon to go on duty.

The fireman ate his dinner with the other men, whilst they were all exchanging news.

Soon after dinner the siren sounded, so the men hurried to their fire engines.

All night they fought to put out the fire which had engulfed the council buildings.

In the early hours of the morning the firemen returned to the fire station.

WRITING A PROJECT or DOING RESEARCH ABOUT TREES

Anne got up early on Saturday morning to make a start on her tree project.

Later that morning Anne searched the house for a book which had information on trees.

After lunch Anne made her way to the public library but the book that would have been useful was out on loan.

By mid afternoon Anne had managed to buy a book from her local book shop.

When she got home Anne finished her project and was pleased to have her Sunday free.

Alf the farmer was woken suddenly by the sound of the cock crowing.

Alf ate a big breakfast before setting off to get his plough out of the barn.

By the end of the morning Alf had ploughed the meadow.

Early in the afternoon Alf sowed the seeds in the furrows he had ploughed. By the time summer was nearly over, Alf had a very big harvest to gather.

GOING TO SEE A DOCTOR

That afternoon Mrs Green was annoyed that she had to wait such a long time to get to see the doctor.

Mrs Green returned home late in the afternoon, but was pleased the doctor had
said it was nothing serious.

PREPARING FOR A DINNER

Mrs Smith set out at lunch time to buy all the food for her family’s dinner.

That afternoon Mrs Smith got home from the shop with her shopping bags full.

Towards dinner time, Mrs Smith began chopping the carrots and onion. By early evening the dinner was almost cooked and ready to serve.
That evening Mr Smith returned home and was ready to eat a great big meal.

Mr Cunningham hurriedly ate his breakfast so that he could make his way to Mrs Peacock’s house.

Not long after breakfast Mr Cunningham set about moving Mrs Peacock’s water tank to a different part of her loft.

It was almost lunch when Mr Cunningham saw that the pipe he had brought was too short.

After lunch Mr Cunningham made his way to the town to buy another pipe.

Mr. Cunningham had to work very hard that afternoon in order to get the job finished on time.

A FAMILY’S EXPERIENCES WITH A POWER CUT

Late that evening all the family were reading when suddenly the lights went out.

On waking up in the morning the family still didn’t have any electricity.

A storm had damaged the power station so the family couldn’t have their usual cooked breakfast.

Late that morning Mrs Johnson took the bus into town to go and buy some candles.

Late one summer morning Tina set about tidying up her back garden, which was in a terrible mess.

By lunch time all the weeds and rubbish had been cleared and Tina looked in the shed for the lawnmower.

By mid-afternoon Tina had made the lawn look beautiful.

Later that afternoon Tina went to the shops to buy some garden ornaments. By evening Tina had made her garden look beautiful once again.

After breakfast James grabbed his notebook and pen and made his way to the train station.

James spent his morning on the platform noting down all the times and destinations of the trains.

When lunch time came, James went across the road to the café to buy himself some lunch.

After lunch James went back to the train station where he stayed all afternoon.

That evening James entered all the train times and destinations in his large train folder.

THEMATIC AND TEMPORAL STORIES TO CHECK FOR STRATEGIC AND SEQUENCING PROBLEMS

A VISIT TO THE DENTIST

A VISIT TO THE SEASIDE