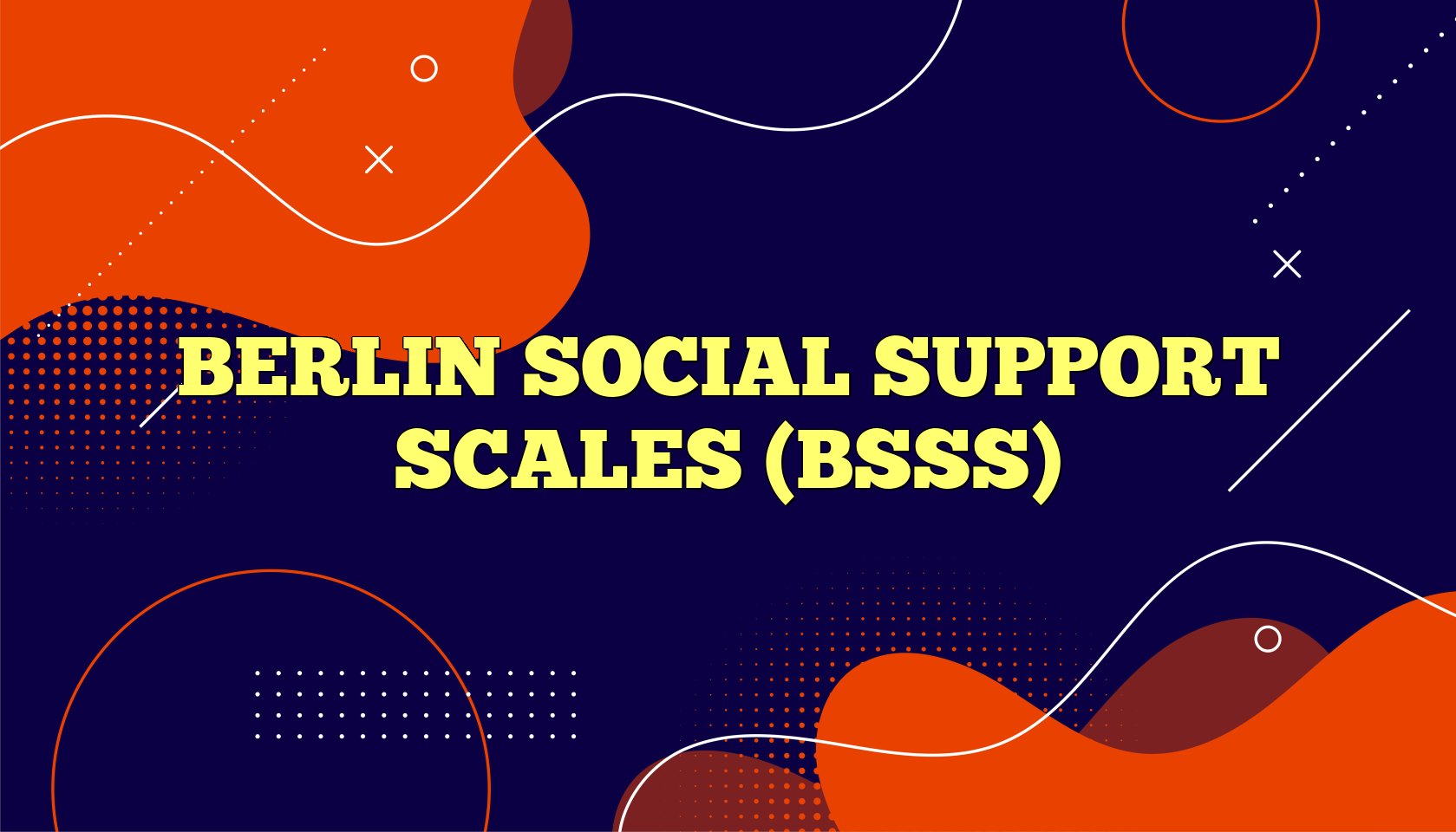 The Berlin Social Support Scales (BSSS, Schwarzer & Schulz, 2000) were developed based on theoretical considerations and reviews of established measurement instruments for social support.
All items were discussed by an expert panel and partly revised after a pilot study with cancer patients. Items of the received/provided support subscales referring to unfavorable support behavior of the partner were omitted from our study after patients expressed rejection of those statements.

The answering format is the same for all subscales: Patients rate their agreement with the statements on a four-point scale. Possible endorsements are strongly disagree (1), somewhat disagree (2), somewhat agree (3) and strongly agree (4). Negative items need to be reversed. Scale scores are obtained either by adding up item responses (sum scores) or by generating the scale mean score.

Three BSSS subscales, i.e., perceived support, received and provided support, respectively, allow for further distinction of different kinds of support. In some research contexts, a fine-grained analysis of various support types may be of great value. The perceived support subscale comprises items of emotional and instrumental support; adding up the respective items yields two discrete scores for each support type. Similarly, overall received and provided support scores can be split up by summarizing emotional, instrumental, and informational support item scores for each subscale separately.

The multidimensional approach of measuring social support is a unique feature that distinguishes this inventory from other questionnaires. The 6 subscales of the BSSS (perceived, actually provided and received support, need for support, support seeking, protective buffering) measure both cognitive and behavioral aspects of social support.

Measures of Perceived Social Support, Need for Support, and Support Seeking were assessed only once as they are reflect stable, general characteristics. With varying coping tasks, stress levels, and adjustment requirements over the study period, levels of Received and Provided Social Support as well as Protective Buffering changed accordingly. Within marital dyads, provided and received support were related. Higher levels of received support were associated with indicators of better psychosocial adjustment.

The multifaceted structure of the instrument allows for a comprehensive assessment of social support in various research contexts in individuals and across dyads. The simplicity and shortness facilitate flexible use according to the particular assessment needs without compromising on reliability and validity. The items are easy to understand, the answering format is the same across all subscales. The broad spectrum of applications from laboratory research to clinical settings and across different healthy and disease populations alleviates comparisons between diverse populations. The BSSS is also suitable for repeated measurement. The scales may be applied in conjunction or separately, with or without reciprocal (dyadic) support assessment.

The subscales on Actually Received and Provided Support and Protective Buffering are geared towards coping with a stressful episode. Also, the range of assessed actual support behaviors is limited with focus on a temporarily hospitalized/physically impaired population. At this time, no information is available about the usefulness of these three subscales in the absence of life stressors. Especially the aforementioned subscales may also be susceptible for distortion of measurement due to social desirability, a typical problem in social support research. The scales also do not assess negative social interaction or its consequences.

Endorsements (for all BSSS scales):

Please think of persons who are close to you.

Please note that in the 2001 cancer surgery study these items were presented in a mixed order. The present listing by scale has been chosen for clarity.

Think about the person who is closest to you, such as your spouse, partner, child, friend, and so on. How did this person react to you during this past week?

Please note that in the 2001 cancer surgery study these items were presented in a mixed order. The present listing has been chosen for clarity.

Satisfaction with Support Receipt (Recipient only)

In general, I am very satisfied with the way this person behaved.

Note: Negative items have not been used in the original 2001 cancer surgery study.

Now think about the patient. How did you interact with him during this past week?

Note: Different forms for men and women were used in the cancer study

Laireiter A & Baumann U. Network structures and support functions: Theoretical and empirical analyses. In Veiel HOF & Baumann U, editors. The meaning and measurement of social support. New York: Hemisphere; 1992. p. 33-55.

Schulz U & Schwarzer R. Long-term effects of spousal support on coping with cancer after surgery. Journal of Social and Clinical Psychology. 2004; 23: 716-732.

Schwarzer R & Leppin A. Social support and health: A theoretical and empirical overview. Journal of Social and Personal Relationships. 1991; 8:99-127.