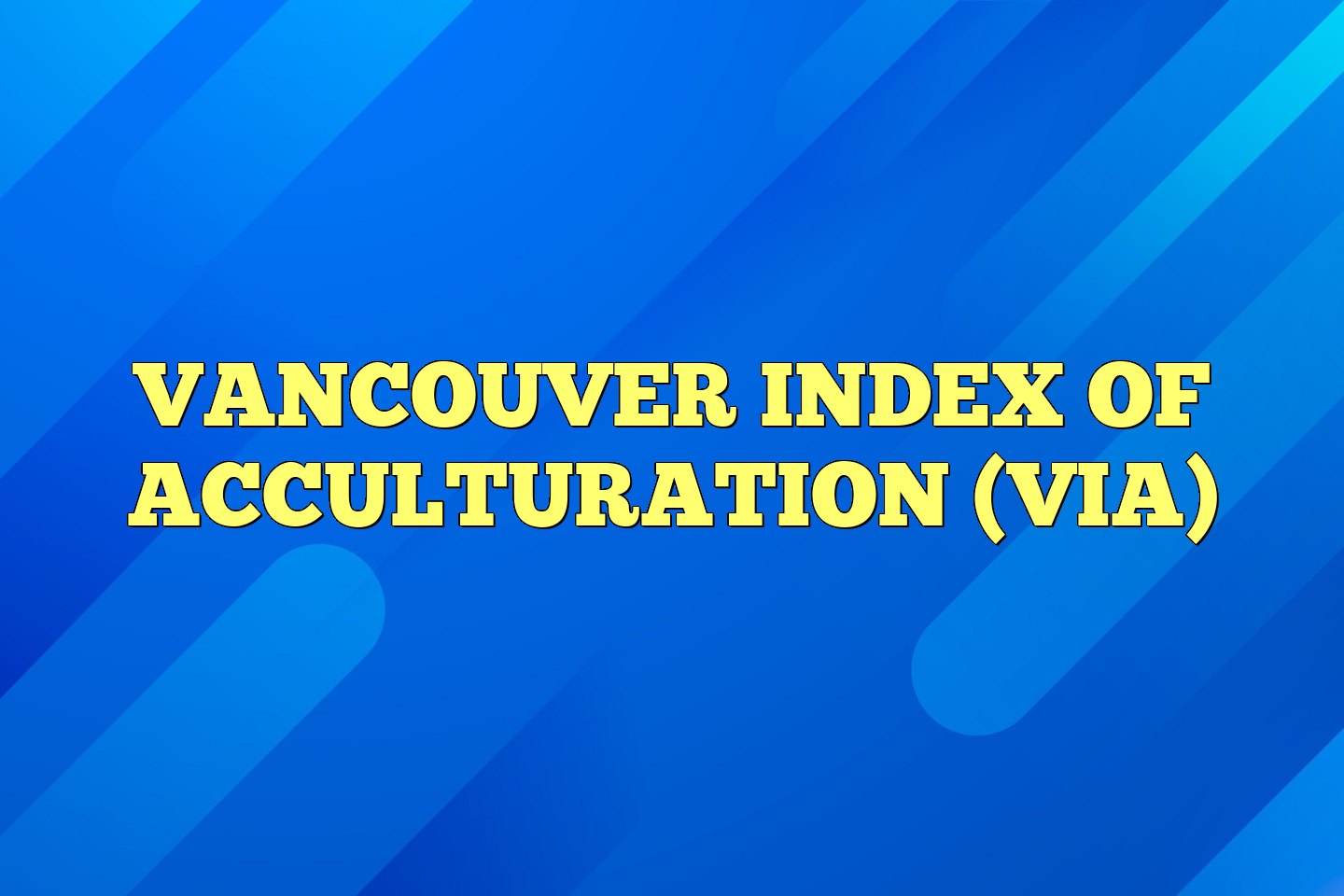 The culture in which people live plays an important role in shaping their sense of self. Indeed, one facet of people’s self-identity is that they belong to a certain cultural group. Thus, they have a sense of themselves as being, for example, Canadian, American, or Chinese. When an individual moves from one culture to another, many aspects of self-identity are modified to accommodate information about and experiences within the new culture. This process, generally referred to as acculturation, involves changes that take place as a result of continuous and direct contact between individuals having different cultural origins (Redfield, Linton, & Herskovits, 1936). The Vancouver Index of Acculturation (VIA) is a measure of this construct.

Reliability of the VIA was assessed by means of Cronbach alpha coefficients and mean interitem correlations. Internal consistency (alpha) coefficients were .79 for the six-item Heritage subscale (mean interitem r — .40) and .75 for the six-item Mainstream subscale (mean interitem r = .34). Internal structure, specifically orthogonality, was assessed by calculating the subscale intercorrelation. This analysis demonstrated that the two dimensions of acculturation were orthogonal in the overall sample (r = .09, ns), as well as in both first- and second-generation groups (rs = .09 and .15, respectively, ns). It should be noted that the mean interitem correlations reported here are similar to the alpha coefficients reported for the two-item scales in Study 1, suggesting that the main advantage of the VIA is not better items but wider coverage of the culture domain. Authors evaluated concurrent validity by comparing the two dimensions with (a) percentage of time lived in a Western, English- speaking country, (b) percentage of time educated in a Western, English-speaking country, (c) the unidimensional acculturation score provided by the SL-ASIA, and (d) a single-item validity check measuring current cultural identification in a unidimensional fashion. The percentages of time lived in and educated in the West were significantly associated with the Mainstream subscale (rs = .47 and .41, respectively, ps < .001). Significant associations were found between the SL-ASIA and the Heritage and Mainstream subscales (rs = -.30 and .54, respectively, ps < .001), and the same was true for the single-item identity measure (rs = -.34 and .44, respectively, ps < .001).

Ryder, A.G., Alden, L., & Paulhus, D.L. (2000).  Is acculturation unidimensional or bidimensional?: A head-to-head comparison in the prediction of demographics, personality, self-identity, and adjustment.  Journal of Personality and Social Psychology, 79, 49-65.

Vancouver Index of Acculturation (VIA)

Please circle one of the numbers to the right of each question to indicate your degree of agreement or disagreement.

Many of these questions will refer to your heritage culture, meaning the original culture of your family (other than American). It may be the culture of your birth, the culture in which you have been raised, or any culture in your family background. If there are several, pick the one that has influenced you most (e.g. Irish, Chinese, Mexican, African). If you do not feel that you have been influenced by any other culture, please name a culture that influenced previous generations of your family. Your heritage culture (other than American) is:

‘North American’ to another descriptor such as ‘American’ in the United States or ‘British’ in Great Britain. Citation:

Ryder, A.G., Alden, L., & Paulhus, D.L. (2000). Is acculturation unidimensional or bidimensional?: A head-to-head comparison in the prediction of demographics, personality, self-identity, and adjustment. Journal of Personality and Social Psychology, 79, 49-65.