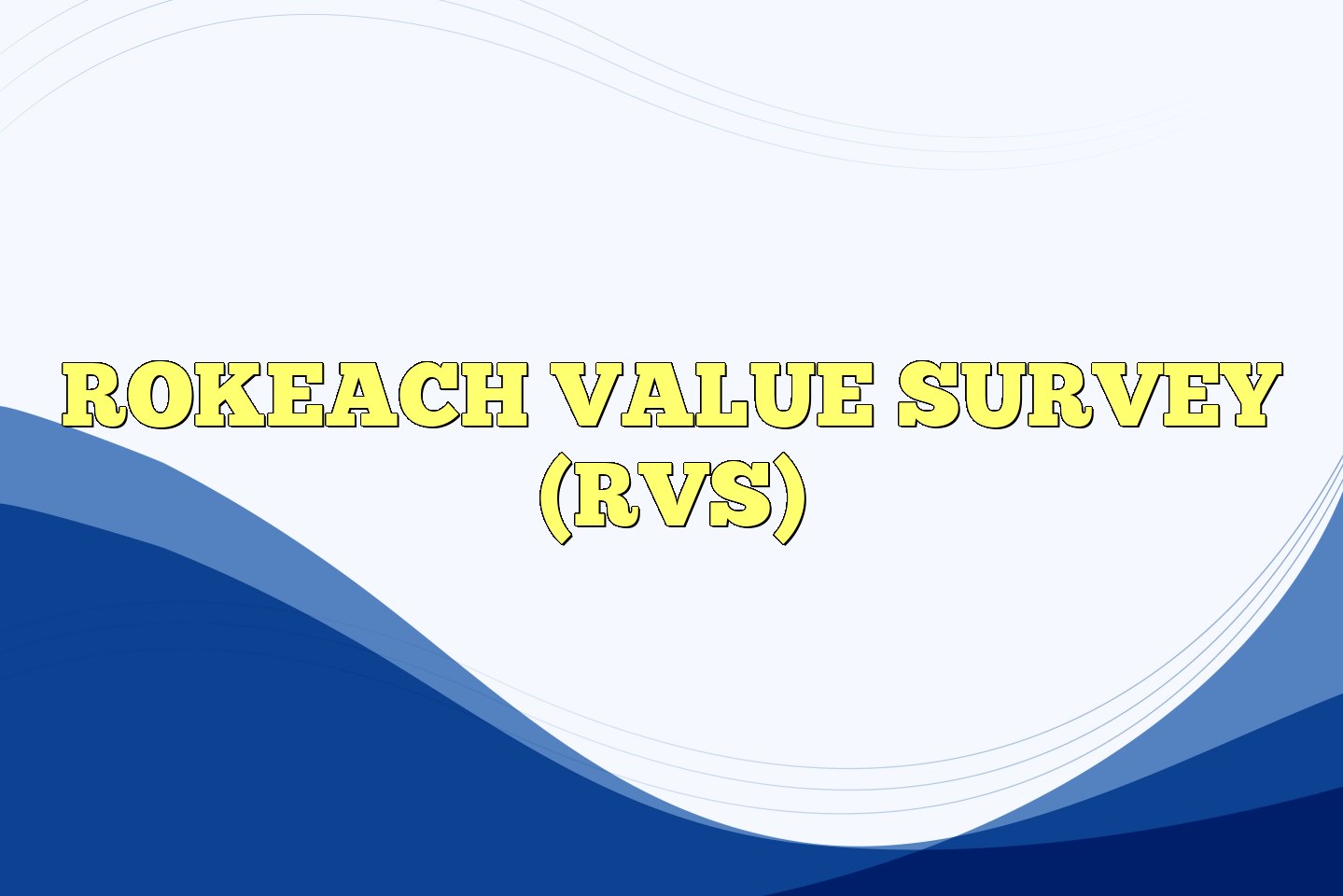 According to Rokeach (1973), a value is a prescriptive or proscriptive belief that a specific mode of behavior or end-state of existence is preferred to an opposite mode of behavior or end-state. This definition re­flects Rokeach's view that values can be sorted into two basic categories: terminal values and instrumental values. Terminal values are "end-states of existence," whereas instrumental values are "modes of conduct." These two categories represent a distinction between means and ends.

Rokeach estimates that there are fewer terminal values, approximately 18 to 24, and more instrumental values, 60 to 72, that are held by the average person. The total possible universe of human values is larger than this, but each individual

The Rokeach Value Survey (RVS) uses a total of 18 terminal values and 18 instrumental values. These values were obtained from a variety of sources, includ­ing an extensive review of the literature on human values. In addition, various groups of people were surveyed and asked to pro­ duce lists of values. Following this induc­ tive process, Rokeach and his associates were able to reduce the values to the final group after considering the following criteria:

Perhaps the most important consideration was methodological: how many values can

a person be reasonably expected to rank order? Eighteen values were judged to be the maximum bits of information that a per­ son could manipulate and reorder.

The actual survey is quite simple. The subject is presented first with the list of ter­minal values (e.g., a comfortable life, salva­tion, wisdom, etc.) and asked to rank them from high to low according to "their impor­tance to you as guiding principles in your life." The same procedure is then repeated with a list of the 18 instrumental values (e.g., independent, obedient, self-controlled, etc.).

Rokeach has used several forms of the RVS but has found that two forms (Forms D and E) are the most reliable forms. Form E presents the list and asks the subject to place a number between I and 18 in front of the appropriate value. Form D uses removable stickers with the values printed on them, which the subject can remove and paste in the appropriate order on a separate sheet of paper. Form D has some advantages over Form E in terms of reliability (see below). Rokeach reports that the vast majority of people are able to complete the survey in ten to twenty minutes.

The Rokeach Value Survey is easy to administer and does not require significant training to score and interpret. The RVS has high face validity. Rokeach's book covering the RVS (1973) gives a great deal of information about the survey and provides data for comparison to those using the survey.

For some people, creating and using a sticker version of the survey (Form D) might present some obstacles (e.g., printing the labels on stickers). One alternative that has been used is to provide the values on small slips of paper or card stock that the subject could sort into order. Otherwise, re­ searchers could simply use Form E, which is a more standard paper and pencil version of the survey.

In reporting the results, Rokeach (1973) uses medians and composite rank orders to­gether with frequency distributions. The median was considered the most appropriate

measure of central tendency. He also notes that other measures have been used, includ­ing t-tests, Anovas, and the Kruskal-Wallis test, and that there is a high level of consis­tency among the tests. It would seem possi­ ble to use means as well as medians, partic­ularly if the size of the group to be compared is relatively large.

One other methodological note is that since the survey asks for a rank ordering of the values, each rank is dependent on the others so that individual items are interre­lated. In other words, if the subject changes the rank of one value the corresponding ranks of all the other values also shift.

The most appropriate use of this survey would be to develop comparative group data or to study changes in values. This survey is less useful in individual assessment or eval­uation.

Rokeach (1973) presents data on a national sample that was obtained in 1968 through the National Opin­ion Research Center (NORC) on a sample of adult Americans over twenty one years of age (n = 1409). In addition, Rokeach (1973) reports results for age groups from 11 to 90 years old. Since the publication of the RVS, there have been several hundred reported studies using this survey. In these studies a wide range of samples are used, including cross-cultural comparisons (e.g., Feather, 1973). Most comparisons involve how dif­ferent groups rank the two sets of values. In his manual Rokeach provides data on his original sample broken down by social class, race, age, religious values, and politi­cal values.

The reliability for Form E is slightly lower than for Form D (.74 for terminal values and .65 for instrumental values). Rokeach suggests this difference is due to the fact that in Form E (the paper/pencil version) the subject can only change an an­swer by crossing out the initial response. In contrast, Form D allows the respondent to continue to re-sort the values until he or she is satisfied with the final ranking. For this reason, Rokeach recommends Form D if it is possible to use it. In all cases, terminal value reliabilities are consistently higher than instrumental value reliabilities.

The RVS represents a different ap­proach to measuring values and is not easily compared with other value measures. It has face validity. Although Rokeach does not address the issue of the validity of the RVS, he does offer some comparative data. In comparing the RVS results with variations of needs as measured by the TAT, correla­tions were found between certain needs and the values. These results suggest that there is a similarity between the measure of val­ues and the measure of needs, although they are not the same thing.

Other research connected the RVS with Osgood's evaluative factor in a semantic differential analysis (Homant, 1969). The results indicate that the RVS measures the same kind of meaning as Osgood's evalua­tive factor.

Braithwaite‚ Valerie. (1985). Structure of Human Values. Testing the Adequacy of the Rokeach Value Survey. Journal of Personality and Social Psychology‚ 49(1)‚ 250-263.