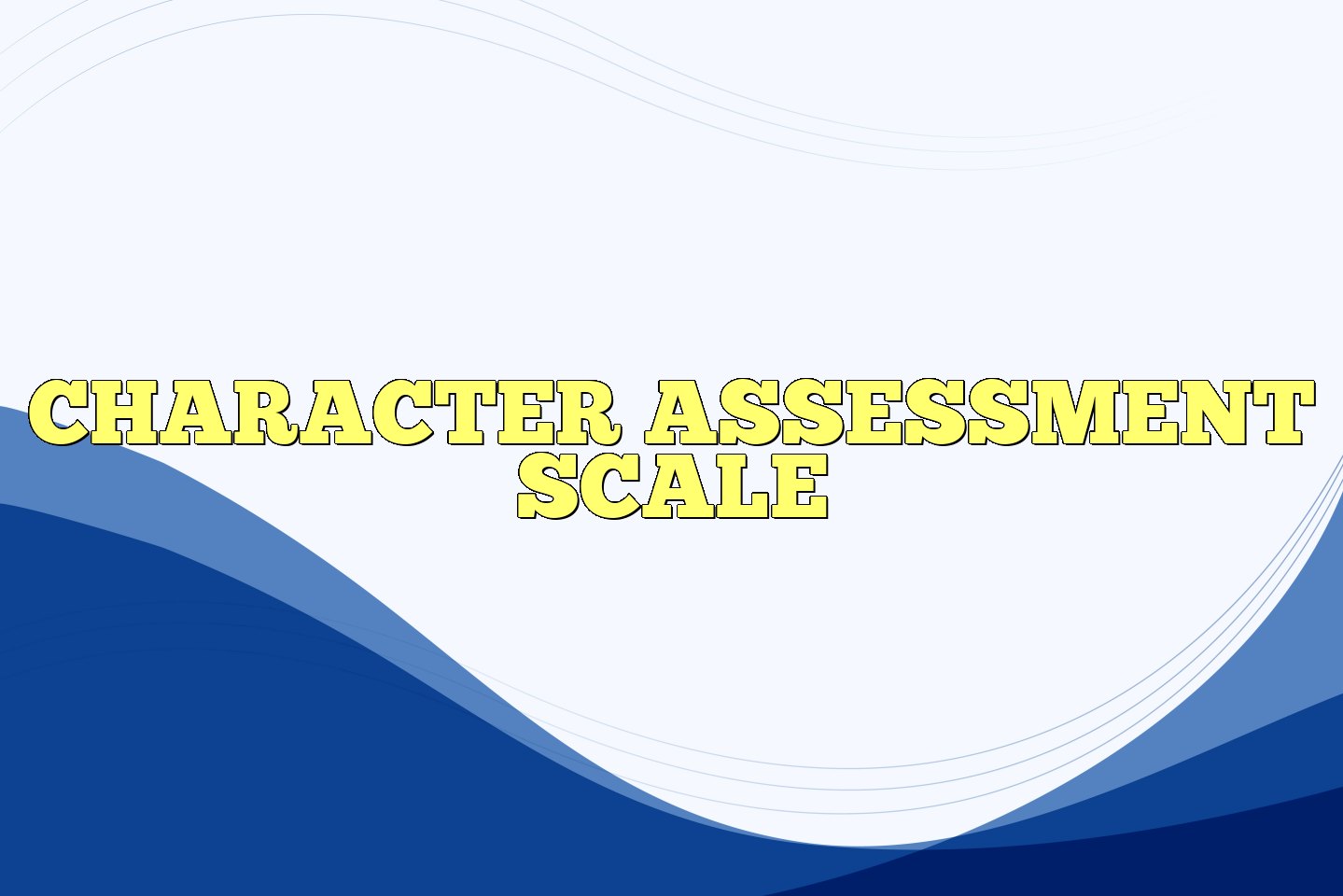 The Character Assessment Scale assesses personal character traits within the framework of an evangelical Christian commitment. This instrument is designed for the helping professional as a reliable and valid instrument for assessing a person's moral strengths and weaknesses according to bib­lical standards. It is intended to be a re­ source tool within the therapeutic or counseling setting.

The CAS is part of a family of similar instruments that endeavor to opera­tionalize the moral teaching of Christ as ex­ pressed by the New Testament authors. These include the Sinful Attitudes Inventory by Backus (1969, 1976) and Schmidt, Backus, and Oates (1978), as well as the Spiritual Leadership Qualities Inventory (Wichern, 1980-see review in this volume).

In the initial development of the instru­ment, Schmidt composed 300 true-false items consisting of a revised list of Backus's seven deadly sins. Revisions were made to in order for the items to more fully encom­pass the interpersonal and behavioral di­mensions of the sins. Also, some of the traits were renamed to reflect a more psy­chological, contemporary emphasis. Seven corresponding virtues were added (character strengths) to the seven deadly sins, and two scales to measure an additional dimension (Honesty). Pretesting with a sample of 60 individuals eventually resulted in the selec­tion of 225 of these items for the final ver­sion of the instrument.

The test measures eight basic moral re­ sources divided into four attitudes of the heart (those dealing with Truth, Respect, Concern, and Anger) and four attitudes of the flesh (involving the use of Money, Time and Energy, Sexuality, and Bodily Health). Each of these character traits is composed of two subscales: a character strength and a related moral weakness. The score for each of the eight moral resources is derived from subtracting the weakness score from the strength score.

The CAS manual provides detailed step-by-step instructions for scoring the answer sheet to the instru­ment. Scoring the various subscale mea­ sures and plotting them along the response profile is a rather involved process, al­ though a computer program was available at one time from the author to automate scor­ing on computers running MS-DOS. Schmidt notes that once the scorer becomes familiar with the process, he or she can score an instrument by hand in seven to eight minutes.

Since the instrument is intended as a re­ source tool within the therapeutic setting, the manual provides very detailed guide­ lines for interpreting the results and debrief­ing those results with the client. Included are numerous biblical illustrations and in­ sight suggestions that can be shared with the client for each of the subscales.

In the CAS man­ual, Schmidt provides a detailed descriptive overview of the roughly 600 individuals from across America (92%) and Canada (8%) who completed the instrument (Schmidt, 1987, appendix A). The normative sample was composed of 54% female with an aver­ age age of 38 years and an average of 17 years of education. They represented 45 American states and 7 Canadian provinces. Sixty-four percent were married; 76% iden­tified themselves as Protestant; and the ma­jority of respondents were middle income. In terms of occupation, 19% were pastors and pastoral counselors and another 3% were secular counselors. Fourteen percent were homemakers and 15% were students. Seventy-five percent of the normative sam­ple were not receiving any treatment or counseling for emotional problems at the time of testing, whereas the remaining 25% were under psychological or psychiatric care. Most of the sample were regular church attenders.

Cronbach's alpha was computed across items for each of the eight basic sub­ scale measures. The resulting coefficient values ranged from 0.61 to 0.83 with an av­erage of 0.75, reflecting interitem consis­tency for the various subscales that are ade­ quate but not exceptionally high. There is a strong pattern of high intercorrelations among the various subscales.

All subjects were asked before taking the test which of the eight moral resources they considered to be their strongest and weakest areas. A significantly higher percentage of respondents had test outcomes that agreed with their predic­tions than would be anticipated by chance (x2 = 55.4, p < .0001). The same was true when counselors were asked to predict their client's strongest and weakest resources (X2 = 23.7, p <.001).

A final test of validity by Schmidt (1983) involved asking 25 seminary students to take the test a second time and purposely present themselves in the most positive a manner possible. This significantly in­ creased the Denial score in the instrument, the subscale used by the administrator to partially assess the validity of the client's response.

This_ test is designed to help you understand yourself better. It is based on the belief that a healthy personality reflects a balanced respect and concern for both yourself and other people. In particular, the test measures how you tend to use and invest your respect, concern, anger, money, time, body, and sexuality.

You will receive scores on 15 traits of character, plus a scale that suggests how carefully and honestly you have described yourself on the test. Your scores will be given back to you, along with descriptions of the traits and guidelines to help you interpret you scores.

To answer some of these questions honestly, you will have to stop and think for a moment. Do not be in a hurry. A good half the value of taking the test should be what you learn about yourself in responding to the items that make you stop and think.

If you simply cannot decide which answer to make, just skip the question. But answer as many questions as you possibly can because blank answers reduce the value of the test.

Make all of your marks on the answer sheet, and do not mark on the pages of questions that follow.

The instrument, answer sheets, and manual can be obtained from:

All rights are reserved on this instrument.

Schmidt, P. F., (I 983). Manual for use of the Character Assessment Scale (2nd ed.). Shelbyville, Kentucky: Institute for Character Development.