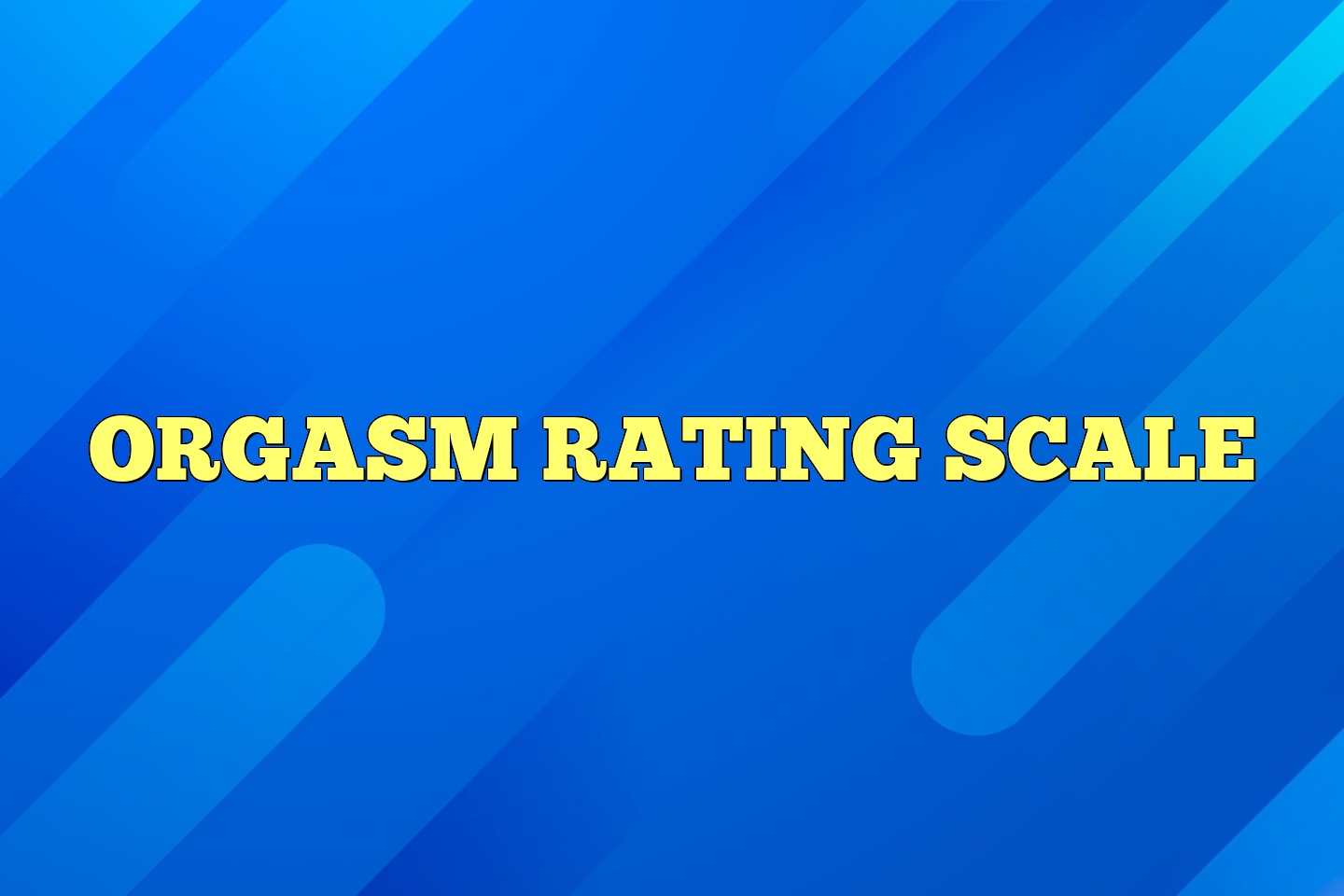 The Orgasm Rating Scale (ORS) employs a multidimensional approach to assess and quantify the psychological experience of orgasm in both men and women. It was developed to address the lack of a comprehensive, theoretically based self-report measure of orgasm.

The Orgasm Rating Scale ORS is a 40-item, self-report adjective-rating scale. Two subscales assess sensory and cognitive-affective dimensions, reflecting a two-dimensional model of the psychological experience of orgasm that has been previously theorized and/or investigated by others (e.g., Davidson, 1980; Mah & Binik, 2001; Warner, 1981). The sensory dimension represents the perception of physiological events (e.g., contractile sensations), whereas the cognitive- affective dimension represents the subjective evaluations (e.g., intensity, satisfaction) and emotions (e.g., elation, intimacy) associated with orgasm. Each of these dimensions further encompasses multiple components. The ORS contains 40 adjectives, 28 of which are employed in sub- scale scoring. Individuals are asked to rate each adjective on a 0–5 rating scale according to how well it describes their most recent orgasm experience. The ORS was developed to describe orgasm experiences attained under two sexual-context conditions: solitary masturbation and sex with a partner.

To create the scale (see Mah & Binik, 2002), an initial pool of 141 adjectives was compiled from the available self-report literature in which individuals had been asked to describe their subjective experience of orgasm. Pilot ratings of items reduced the pool to a final set of 60 adjectives. These adjectives were formatted into a preliminary version of the ORS, which was then employed in two cross-sectional studies of the two-dimensional model of the experience of orgasm. Undergraduate and graduate student participants rated the set of adjectives, using the 0–5 rating scale, to describe orgasm experiences attained through solitary masturbation and through sex with a partner. When rating orgasm experienced with a partner, individuals were also asked to indicate from a list of options the particular sexual behavior by which they attained the orgasm (e.g., through intercourse, oral stimulation, manual stimulation, etc.). Exploratory factor analysis of the ratings data resulted in the current reduced pool of 28 adjectives; the remain- ing 12 adjectives included in the current 40-item version reflect aspects hypothesized to be relevant to the orgasm experience (e.g., intensity, altered state of consciousness) but were not specifically evaluated.

Internal consistency of the ORS was examined in the initial and cross-validation studies (Mah & Binik, 2002). Results in both studies indicated high internal consistency for both men and women across sexual contexts (Cronbach’s alphas ranging from .88 to .92).

Results indicated that the two-dimensional model pro- vided an adequate representation of the orgasm experience in both men and women across both sexual contexts. The model was superior to an alternative one-dimensional model, in which all components were loaded onto a single global dimension of orgasm experience. It was also comparable to an alternative three-dimensional model that retained the sensory dimension but separated the cognitive-affective into distinct cognitive and affective dimensions. Significant gender differences were observed in both studies for primarily sensory-type components, with women reporting higher subscale scores than men, but these differences were generally small. The only consistently large gender differ- ence across both studies involved the shooting-sensations component, with men reporting higher scores than women. This was interpreted to reflect the male capacity for ejaculation. Similarly, significant sexual-context differences were observed with several components, but only the difference involving the emotional-intimacy component appeared consistent and substantial, with higher scores in the sex- with-partner context. This finding may reflect the impact of the sex-with-partner context’s inherent psychosexual and emotional qualities on the orgasm experience.

We also examined potential determinants of orgasmic pleasure and satisfaction as a critical aspect of the subjective orgasm experience (Mah & Binik, 2005). This was accomplished by employing one of the cognitive-affective components, the pleasurable-satisfaction component, as an index of orgasmic pleasure and satisfaction and regressing it on all of the other cognitive-affective and sensory com- ponents. Within both the solitary-masturbation and sex- with-partner contexts, more of the other cognitive-affective components than the sensory components significantly predicted scores on the pleasurable-satisfaction component. The pleasurable-satisfaction component scores were also significantly associated with ratings of overall psychological intensity and physical intensity of orgasm within both sexual contexts, as well as relationship satisfaction within the sex-with-partner context. Although reported anatomical location of the orgasm experience did predict pleasurable- satisfaction component scores, this relation disappeared when overall psychological or physical intensity was taken into account. The results were taken generally to support the hypothesized importance of psychological and psycho- social factors, in addition to physiological mechanisms, in the subjective orgasm experience.

These findings offer preliminary evidence for the utility of the ORS as a measure of the psychological experience of orgasm. However, the ORS has been evaluated only in university student populations to date. Further psychometric- evaluation studies involving healthy and clinical nonstudent samples spanning a range of age and sexual/relationship experiences are recommended. Researchers might also investigate the potential of the ORS in assessing orgasm difficulties or in evaluating the efficacy of medical or psycho- therapeutic interventions targeting such difficulties.

Recall to the best of your ability the most recent orgasm you experienced during sex with a partner. This would include any sexual activity with your partner in which you had orgasm while your partner was present.

To rate each of the words below, use the following scale.

Does Not Describe Describes It

It At All Perfectly

Please rate all of the words; do not skip any

Mah, K., & Binik, Y. M. (2005). Are orgasms in the mind or the body? Psychosocial versus physiological correlates of orgasmic pleasure and satisfaction. Journal of Sex and Marital Therapy, 31, 187–200.