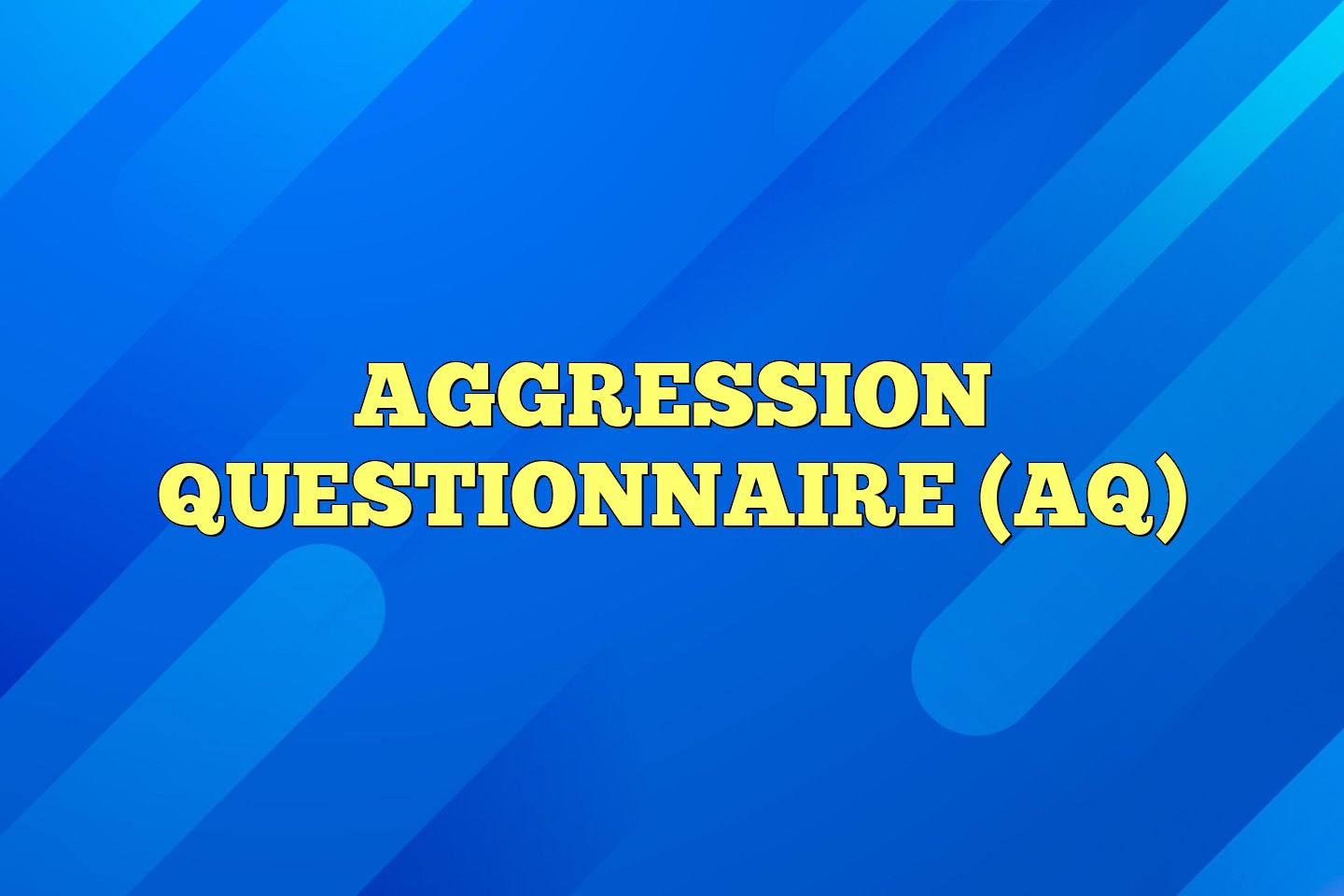 Background of the  Aggression Questionnaire (AQ):

The Aggression Questionnaire (Buss & Warren, 2000) is one of the most widely used validated self-report measures to assess aggression. This study analyzes the factorial structure, internal consistency, and convergent validity of the AQ in a Spanish sample with high levels of violence. Method: The questionnaire was administered to 767 partner assaultive men undergoing psychological treatment. Results: The results of the confirmatory factor analysis supported the four-factor structure. Also, positive correlations between the AQ and other instruments measuring aggression were found, finding that aggression and anger decrease with age in this sample. Conclusions: The results obtained showed that the AQ is a suitable instrument to assess aggression, anger, and hostility in partner assaultive men.  This self-report inventory makes it possible—and practical—to routinely screen children and adults for aggressive tendencies. The Aggression Questionnaire (AQ) measures an individual’s aggressive responses and his or her ability to channel those responses in a safe, constructive manner. Because it takes just 10 minutes to complete, the AQ can be administered quickly to large numbers of people.

Items of the Aggression Questionnaire (AQ):

1. My friends say that I argue a lot.
2. Other people always seem to get the breaks.
3. I flare up quickly‚ but get over it quickly.
4. I often find myself disagreeing with people.
5. At times I feel I have gotten a raw deal out of life.
6. I can’t help getting into arguments when people disagree with me.
7. At times I get very angry for no good reason.
8. I may hit someone if he or she provokes me.
9. I wonder why sometimes I feel so bitter about things.
10. I have threatened people I know.
11. Someone has pushed me so far that I hit him or her.
12. I have trouble controlling my temper.
13. If I’m angry enough‚ I may mess up someone’s work.
14. I have been mad enough to slam a door when leaving someone behind in the room.
15. When people are bossy‚ I take my time doing what they want‚ just to show them.


16. I wonder what people want when they are nice to me.
17. I have become so mad that I have broken things.
18. I sometimes spread gossip about people I don’t like.
19. I am a calm person. (Reverse scored)
20. When people annoy me‚ I may tell them what I think of them.
21. I sometimes feel that people are laughing at me behind my back.
22. I let my anger show when I do not get what I want.
23. At times I can’t control the urge to hit someone.
24. I get into fights more than most people.
25. If somebody hits me‚ I hit back.
26. I tell my friends openly when I disagree with them.
27. If I have to resort to violence to protect my rights‚ I will.
28. I do not trust strangers who are too friendly.
29. At times I feel like a bomb ready to explode.
30. When someone really irritates me‚ I might give him or her silent treatment.
31. I know that “friends” talk about me behind my back.
32. Some of my friends think I am a hothead.
33. At times I am so jealous I can’t think of anything else.
34. I like to play practical jokes.

The AQ is a full revision of the Buss-Durkee Hostility Inventory, a longtime standard for assessing anger and aggression. It consists of just 34 items, scored on the following scales:

A Total Score is also provided, along with an Inconsistent Responding Index. Standardization is based on a sample of 2,138 individuals, ages 9 to 88, and norms are presented in three age sets: 9 to 18, 19 to 39, and 40 to 88. In addition, norms for the Verbal Aggression and Physical Aggression scales are separated by sex.

Written at a third-grade reading level, AQ items describe various characteristics related to aggression. The respondent simply rates each item on a 5-point scale ranging from “Not at all like me” to “Completely like me.” Because it is brief and easy to read, the scale can be used with virtually anyone, including respondents who have difficulty with more complex verbal measures. The test can be hand scored in minutes. Or it can be administered and scored using the AQ CD, which also allows you to print out a detailed interpretive report on the spot.

While the 34-item AQ is recommended for clinical purposes, a short form is available for use in research and in those instances when a client fails to complete the full questionnaire. To use the short version, simply administer and score the first 15 items on the AQ AutoScore Form. Because these 15 items include three from each AQ scale, the short version gives you not only a total score but also scale scores, which correlate well with their counterparts from the full AQ.

In clinical settings, the AQ’s five subscale scores provide a level of detail that is particularly useful for treatment planning and outcome measurement. In correctional settings, the simplicity of the AQ makes it an excellent choice for documenting need for service and focusing rehabilitation efforts. In other institutional settings—schools, businesses, military installations, and geriatric or convalescent hospitals—it can be used for both screening and program evaluation. Brief and inexpensive, the AQ makes large-scale screening of aggression a realistic option.

References of the Aggression Questionnaire (AQ):