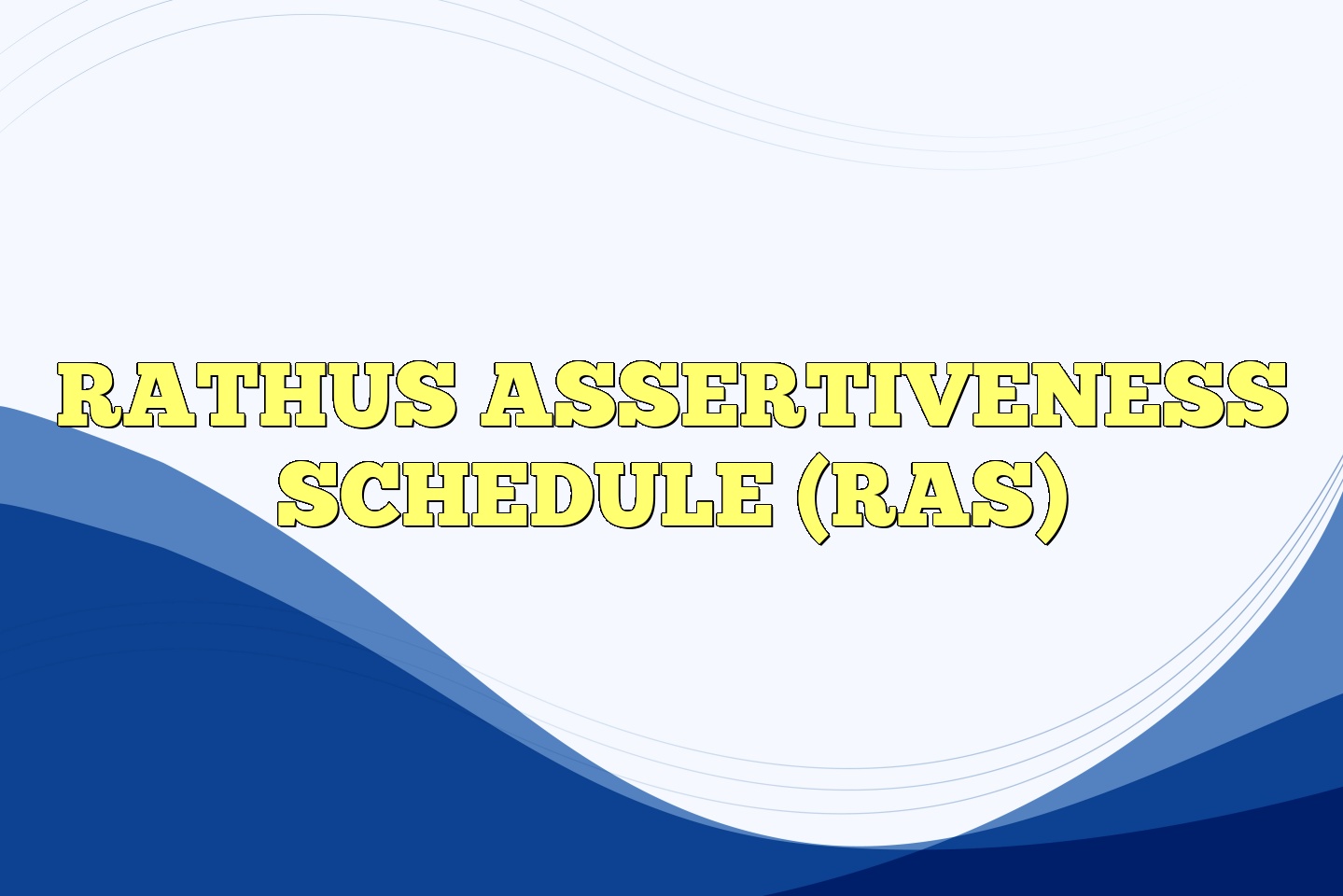 The Rathus Assertiveness Scale (RAS)was designed to measure a person’s level of assertiveness.  It is also an instrument for measuring behavioural change in assertion training. The RAS provides a score and a percentile for interpretation.

The RAS was developed in 1973 by Spencer Rathus. Measures of assertiveness that existed at the time were considered outdated. The RAS was based on: Wolpe and Lazarus’s (1966) situations; items from the Allport (1928) and Guilford and Zimmerman (1956) scales; and diaries kept by college juniors and seniors.

The scale contains 30 items in total, with items scored from very characteristic of me to very uncharacteristic.  Example items:


Most people seem to be more aggressive and assertive than I am.

When the food served at a restaurant is not done to my satisfaction, I complain about it to the waiter or waitress.

I am careful to avoid hurting other people’s feelings, even when I feel that I have been injured.

When I am asked to do something, I insist upon knowing why.

A total score is obtained by adding numerical responses for each item, after changing the signs of reversed items.

The validity of the RAS was established by comparing self-reported RAS scores to two external measures of assertiveness.  Test-retest reliability was established using a Pearson product moment correlation coefficient over a two month period (r = .78), indicating moderate to high stability of test scores. Split-half reliability (a measure of internal consistency reliability) was calculated to be .77, suggesting that the qualities measured by the RAS possess moderate to high homogeneity.  Gustafson (1992) found that the original scale was reliable (Cronbach’s alpha = .82).  Some items are presented in ways that may be considered outdated or heterosexist – given their development more than 25 years ago (Thompson & Berenbaum, 2011).  The RAS has demonstrated discriminant validity with respect to aggression.

The RAS can be downloaded from http://www.cengage.com/resource_uploads/downloads/0495092746_63633.pdf and no permission is required. The instrument can be used both in research that investigates the efficacies of various procedures for shaping assertive behavior and for obtaining pre- and post measures of patients’ assertiveness in clinical practice.

Downfalls and Positives. Downfalls: Suited to university students/graduates. Some items are presented in ways that are outdated or heterosexist – developed more than 25 years ago (Thompson and Berenbaum, 2011).  Discriminant validity, especially with regard to aggression. Positive associations with aggressiveness have also been found for other assertiveness instruments. (Thompson and Berenbaum, 2011). Positives: Online version is very easy to administer and score, percentile ranking.